Since late March several reports published on the BBC News website have included statements along the lines of:

“There are fears of further incidents in the month ahead, when the Muslim festival of Ramadan, the Jewish festival of Passover and the Christian festival of Easter coincide in a rare convergence.”

However, as documented here, none of those BBC reports bothered to explain the relevant topic of the incitement put out by assorted Palestinian factions long ahead of Ramadan.

Notably, the report mentions the arrest of a terrorist responsible for the attack in which Malachi Rosenfeld was murdered during Ramadan in 2015 which the BBC did not report at the time. 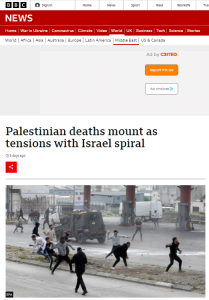 “One of those arrested was a fugitive member of the militant group Hamas who was accused of shooting dead an Israeli in 2015 and had recently escaped from Palestinian custody, according to Israel.”

That report once again promotes the theme of potential violence supposedly related to three religious festivals, this time mentioning rallying calls put out by Hamas and other factions but failing to clarify that non-Muslims can visit Temple Mount during limited hours only and are not allowed to pray there.

“The surge in violence comes ahead of a particularly volatile time, with the start of the Jewish festival of Passover on Friday night coinciding with the Islamic holy month of Ramadan and the Christian festival of Easter.

Hamas, which governs the Gaza Strip, and other militant groups have called for hundreds of thousands of Palestinians to converge on a contested flashpoint hilltop compound in Jerusalem known to Muslims as Haram al-Sharif and Jews as the Temple Mount on Friday to “protect” it from Jewish activity.

Passover traditionally sees an increase in visits by religious Jews to the site, which are viewed by Palestinians as provocative.”

Later the same day the BBC News website published a report by Yolande Knell titled “Jerusalem on edge as festivals fall amid tensions”. That report also uses the theme of converging religious holidays but fails to mention the related incitement and calls to violence from Hamas and other Palestinian factions. 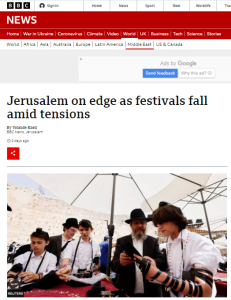 “The last time Ramadan for Muslims, Passover for Jews and Easter for Christians all happened at the same time was three decades ago.

This week, the overlapping religious holidays promise to bring tens of thousands of Israeli and Palestinian worshippers, as well as foreign pilgrims, to Jerusalem’s Old City.

But they have also increased tensions around contested sacred sites.”

Failing to clarify to readers that the ‘clashes’ that occurred at Temple Mount during Ramadan last year were organised and pre-planned, Knell writes:

“Israeli-Palestinian violence has previously erupted when holidays coincide and nationalist Jews want to visit the Temple Mount/Haram al-Sharif compound, where the al-Aqsa mosque is located. Jews revere the compound as the location of two biblical temples and it is the holiest site in Judaism.

Last May, Hamas, the Islamist group which governs the Gaza Strip, fired rockets towards Jerusalem following clashes at al-Aqsa Mosque, setting off a devastating 11-day war.”

“In Jenin, which has been a main focus of Israeli soldiers’ actions, anger is rising.

“Yes, the situation is bad, especially in the month of Ramadan, but we will be united against daily incursions and cold-blooded executions,” says Jihad al-Zohri defiantly. “If it’s imposed on us, we will fight with honour and die with dignity.””

Those two written reports about “tensions” were followed by an item (from 14:32 here) in the BBC World Service radio programme ‘Newsday’ aired on the morning of April 15th.

The introduction from Bola Mosuro included false equivalence between the murders of fourteen people in terror attacks in four Israeli cities and the deaths of Palestinian attackers and terrorists. [emphasis in italics in the original, emphasis in bold added]

Mosuro: “Let’s head now to the Middle East to talk about the spate of killings in Israel and the Palestinian territories.”

If listeners got the impression that they were going to hear any “talk” about the “killings in Israel”, they soon discovered that they were mistaken. After a recording of shouting in Arabic, Mosuro continued with her introduction and presented her sole interviewee, former Palestinian Authority spokesperson Nour Odeh.

Mosuro: “Those are chants and protests at a funeral held for a Palestinian killed by an Israeli army raid in Jenin [mispronounced] in the West Bank on Thursday. Now two men were killed yesterday bringing the total to six Palestinians killed since Wednesday by Israeli forces during raids in the occupied territories. Now the Israeli army said rioters hurled improvised explosive devices at Israeli forces who then responded with live fire. This comes during an important date in the calendar. You see today is the eve of Passover celebrations in Israel and it coincides this year with Easter and – more importantly in the region – the holy month of Ramadan. Well both sides remain on a high alert. The main flashpoint has been the city of Jenin, Nablus and Ramallah, from where I’m joined now by Palestinian political analyst Nour Odeh. […] Now we’ve seen over the past…ehm…few days real tensions and violent clashes…ehm…and quite a heavy crack down from the Israeli forces against Palestinians who’ve also been throwing missiles back. What’s the situation this morning?”

Odeh: “Missiles? There have been no missiles thrown at the Israeli…”

Odeh: “Well even that is still not corroborated. I’m not sure…eh…but anyway this development, we have to keep in mind that what you have here is an uptick in an ongoing situation whereby Israel controls and represses Palestinians…ahm…controls every detail of their daily life. There is a dead end everywhere they look. There is no political horizon and deteriorating economic situation. An Israeli government that refuses to talk about an end to its occupation, that refuses to answer the calls of UN agencies and human rights experts to stop its violations of international law. And during this month it is obstructing Palestinian Muslim and Christian worshippers. On Palm Sunday we saw the procession that takes place in Jerusalem being delayed and obstructed and intimidated.”

CAMERA UK has been unable to find any evidence to support Odeh’s unchallenged claim that the Palm Sunday celebrations were “delayed and obstructed and intimidated” in reports by local and international media or from the Latin Patriarchate of Jerusalem.

Several hours before this interview with Odeh, Palestinian rioters – some identifying with Hamas – had provoked organised and pre-planned clashes on Temple Mount:

“Police said in a statement that at around 4 a.m., dozens of young people began marching in the area. Some bore the Palestinian flag, while others carried green banners associated with the Hamas terror group.

The marchers threw stones and set off fireworks, while stockpiling rocks and other objects to prepare for further clashes, according to police.

Police said they waited for morning prayers to end before entering the Temple Mount to disperse the rioters, and that some of them threw stones at the Western Wall below.”

However, Odeh’s one-sided, incomplete and context-free account of those incidents went completely unquestioned by Mosuro.

Odeh: “As we speak now there are dozens of injuries inside the al Aqsa Mosque with rubber tear…with rubber coated steel bullets and tear gas. There are journalists being beaten inside the al Aqsa Mosque and paramedics are unable to reach the injured. This is a recipe for further deterioration. And it is a recipe that Israel resorts to thinking that more violence, more crack-downs, will subdue a population that wants its freedom.”

Moreover, Mosuro added some context-free talking points of her own:

Mosuro: “And Nour, if I can ask you because you talk about the al Asqa [sic] Mosque which is reminiscent of what we’ve heard in the past – people may recall, you know, what we saw a few years back with, you know, how people were being attacked within the mosque. And I just wonder also, this is come…coincided now again with this weekend’s important religious dates and yet there are curfews imposed which are preventing Palestinians, I believe, from travelling to certain areas where they can see family, observe some of the…the…how is it affecting life for people? Also the general strike which has been declared in Ramallah and Bethlehem in protest at what’s going on.”

Odeh: “Well I mean all of these restrictions they are a reminder for Palestinians that they…they almost have no way out. There is an occupant – a foreign military occupation – that has absolute power over their lives. It is able to exact violence, to invite death and destruction into their neighbourhoods and into their streets and…ah…the most they can do is declare strikes in mourning. But at the end of the day, the situation continues to be deadlocked because there are no consequences for human rights violations. There is no sense of pressure about all of this situation that is heavily documented by human rights organisations, the UN.”

Mosuro: “And that situation I know is going to be keenly watched over the next couple of days – the next 24 hours in fact. Nour Odeh, thank you very much for joining us and she’s a Palestinian political analyst.”

In addition to the fact that listeners did not hear any Israeli point of view whatsoever in this item, it is obvious that Odeh’s entirely predictable and completely unchallenged talking points contributed nothing to audience understanding of the events on Temple Mount on the morning of April 15th or the counter-terrorism operations in Jenin and elsewhere that followed the recent terror attacks in Bnei Brak and Tel Aviv.

Nevertheless, as we shall see in part two of this post, that was not Nour Odeh’s only appearance on BBC World Service radio on that day.