Throughout the month of April 2022, sixteen written or filmed reports relating to Israel and/or the Palestinians appeared on the BBC News website’s ‘Middle East’ page, some of which were also published on other pages and four of which were carried over from the previous month.

Five reports, two of which were carried over from the previous month, concerned terrorism and/or counter-terrorism operations: 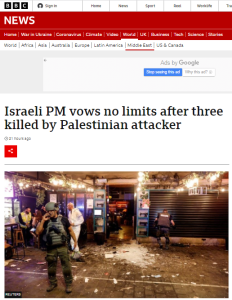 One report related to one incident of Palestinian vandalism at Joseph’s Tomb: 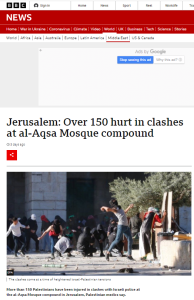 One item carried over from the previous month concerned Palestinian health care:

One item carried over from the previous month was linked to Russia’s invasion of Ukraine:

One item concerned a study of antisemitism:

Naftali Bennett: Israeli PM to pay for family’s food after criticism first appeared in updates, then on ME page (27/4/22 to present)

Stories relating to internal Palestinian affairs which were ignored by the BBC during April 2022 include clashes between PA security forces and gunmen in various locations, disputes between Palestinians and UNRWA, armed clashes between rival clans in Hebron, the arrest of a political activist and glorification of terrorism.

A TIMELINE OF TERROR AND TENSIONS, SPRING 2022 (CAMERA)