Listeners to BBC Radio 4 on May 2nd heard several items relating to comments made the previous day by the Russian foreign minister Sergey Lavrov during an interview with an Italian TV channel.

The story was reported in a news bulletin aired on the ‘PM’ programme (from 02:41 here) and again in another news bulletin (from 22:16 here), immediately after which presenter Carolyn Quinn brought in the BBC’s Jon Donnison who is apparently currently once again in Jerusalem. [emphasis in italics in the original, emphasis in bold added] 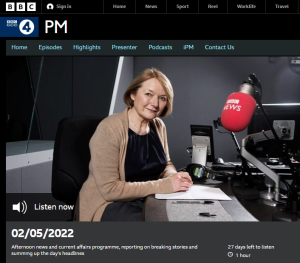 Quinn: “Jon, could you explain the context of these comments by Sergey Lavrov and what the reaction has been there in Israel?”

Quinn’s request for the context to Lavrov’s false claim that “Hitler also had Jewish blood” could have been the cue for listeners to hear some information on the obviously relevant topic of the long history of Russian antisemitism, especially given that the BBC had previously reported on that topic when Russia annexed Crimea in 2014.

Instead, while failing to clarify in the BBC’s own words that Lavrov’s claim is false, Donnison focused on statements made by Israeli officials.

Donnison: “Prime Minister Naftali Bennett said the comments were lies. Yair Lapid, the foreign minister here, went even further; he called it an unforgivable and scandalous statement and he said to say that Hitler was of Jewish origin is like saying the Jews killed themselves in the Holocaust. We also have a statement from Dani Dayan – he’s the chairman of Yad Vashem, the World Holocaust Remembrance Centre here in Jerusalem. He said the words were absurd, delusional, adding that the claim Hitler was of Jewish descent was completely unfounded.”

Quinn: “Now Israel’s foreign ministry has summoned Russia’s ambassador for clarification and demanded an apology. Israel, as we know, has a large Russian speaking population and has been trying in recent months to act as a bit of a mediator between Russia and Ukraine. Might this lead to Israel taking a tougher line against Putin now?”

Donnison’s response was to cite anonymous “criticism” of Israel in order to promote the notion that Israel has not been doing enough to help Ukraine.

Donnison: “Well I definitely think the government here is going to face a bit of pressure here to do so. You’re right: Israel has been walking a fine line if you like. It is of course a strong ally of the United States. On the other hand, eh…it needs Russia for some of its strategic aims in the region. There has been criticism of the Israeli government for not being tough enough on Vladimir Putin…eh…for not backing sanctions strongly enough and also for not supplying direct military aid to Ukraine. It has supplied some protective equipment – flak jackets, helmets, that sort of thing – for civilian use. But I do think these remarks are going to put pressure on the Israeli government to perhaps change its policy.”

Listeners were not told that “strategic aims in the region” actually means not letting Iran and Hizballah use Syria as a base from which to attack Israel.

An hour later BBC Radio 4’s ‘Six O’Clock News’ programme aired another report (from 09:34 here) from Donnison. After again portraying statements made by Israeli officials and while again failing to explain in the BBC’s own words that Lavrov’s claim is false, Donnison once again turned audience attentions to the topic of anonymous “criticism” of Israel. 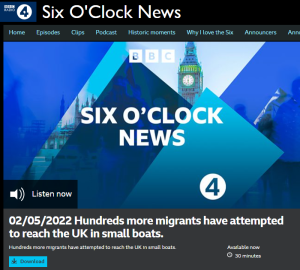 Donnison: “Over recent months, Israel – which has a large Russian speaking population – has tried to act as a mediator between Russia and Ukraine. But the government has faced criticism for not taking a tough enough line with President Putin and for not offering enough direct military support to Ukraine. Sergey Lavrov’s remarks could increase pressure for that policy to change.”

Since the beginning of Russia’s invasion of Ukraine, the BBC has largely avoided reporting on the humanitarian aid and medical delegations sent there from Israel. Israel’s absorption of over 8,000 new immigrant refugees from Ukraine has been the topic of just one minute and 47 seconds of BBC coverage to date.

While failing to report events such as Israel’s vote in favour of suspending Russia from the UNHRC, the BBC has promoted a narrative of Israeli “ambivalence or neutrality”. As we see in these reports from Jon Donnison, promotion of that superficial false narrative apparently continues to be a BBC priority.