The shooting of Palestinian journalist Shireen Abu Akleh early on the morning of May 11th in Jenin quickly made headlines around the world even though the circumstances of the Al Jazeera reporter’s death are still unclear and may well remain so.

Just a couple of hours after the incident had first been reported, the BBC World Service radio programme ‘Newsday’ ran the headline “Al Jazeera journalist killed during Israeli raid in Jenin”.

“A well-known Palestinian journalist has been shot dead during a raid by Israeli forces in the occupied West Bank.”

Presenter James Copnall opened that hour of the programme as follows (from 00:38 here): [emphasis in italics in the original, emphasis in bold added]

Copnall: “One of our top stories: breaking news that Israeli soldiers have been accused of shooting dead an Al Jazeera journalist, Shareen Abu Akleh, and wounding another reporter during a raid in the West Bank. That accusation has been made by the Palestinian health ministry. Al Jazeera has confirmed the death of its correspondent. Israel says it is investigating the death and says it’s possible…eh…that the journalist may have been killed by Palestinian gunfire. We are going to get you an update on that story very shortly.”

At 04:45 listeners heard the following:

Copnall: “Right, let’s go back to that story we were talking about at the top of the hour: the breaking news of the shooting dead of an Al Jazeera journalist, Shireen Abu Akleh, in the West Bank. Palestinian officials say Israeli soldiers were responsible. Israeli military less clear on that: calls for an investigation.”

James Copnall then brought brought in Tim Franks from Jerusalem.

Franks: “Well you’re right, James. There are competing accounts this morning but what we do know is that Shireen Abu Akleh…ehm…an Al Jazeera correspondent – enormously experienced, enormously well-liked by those who work in this region – died early this morning. The Israeli army were carrying out an operation in Jenin in the north of the West Bank. They’ve been carrying out lots of raids in that area in recent weeks.”

Franks refrained from mentioning the relevant fact that some of the terrorists responsible for several fatal attacks against Israelis in recent weeks have come from Jenin and the surrounding area before going on to amplify claims from Al Jazeera and “eyewitnesses” that the BBC has obviously not independently verified.

Franks: “According to…eh…the boss of the Al Jazeera office in the occupied territories, it was 6:30 in the morning. She got out of her car, she had a flak jacket on that clearly showed that she was press and the director of the Al Jazeera office says that she was shot by – in his words – an Israeli sniper with a bullet to the head. It entered just below her right ear. Now the Israeli army have put out a statement saying that it was they who came under massive fire – again, that’s been denied by Palestinian eyewitnesses – and they said that they shot back and indeed they are claiming that it’s possible that Shireen Abu Akleh was…was killed by gunfire from the Palestinian side. That is denied completely by Palestinian eyewitnesses who say there was no fire coming from the Palestinian side.”

Franks did not tell listeners about the videos, including one put out by the Palestinian Islamic Jihad – which of course has a significant presence in the Jenin refugee camp – showing Palestinians shooting at Israeli forces operating to arrest terror suspects that morning. He later told listeners that “Al Jazeera has described it out of their HQ in Qatar as state sponsored terrorism” and opined that “there are bound to be calls for a proper inquiry” without informing listeners that a joint investigation had already been offered by Israel before he went on air but that offer was refused by the Palestinian Authority, which by then held Abu Akleh’s body.

Copnall went on to speak with Israeli journalist Amichai Stein of Israel’s Kan 11 who noted an offer of a joint investigation from Israel’s foreign minister and pointed out that the Palestinians have refused such offers in the past. Stein mentioned the video “that shows the Palestinians shooting inside the camp” but was not asked for any more details by Copnall. At the end of that interview, Copnall told listeners that:

Copnall: “In a few minutes’ time we will hear from Palestine’s ambassador to the UK…”

The BBC has had to correct inaccurate descriptions of Husam Zomlot’s titles in the past and in February 2020 pledged to “remind editors of his actual title”. Apparently that reminder was not very effective because Copnall later repeated the inaccurate title at 24:08:

Copnall: “We start with some recently breaking news: Al Jazeera says its journalist Shireen Abu Akleh has been shot dead by Israeli Defence Forces in the West Bank. The Israeli military disputes this and Israel’s foreign minister has just called for a joint investigation with the Palestinian Authority. In recent weeks the Israeli military has stepped up its operations in Jenin, which is a historic flashpoint in the Israeli-Palestinian conflict, seen by the Israelis as a stronghold of Palestinian armed groups. In the West Bank, seen as a refugee camp hosting civilians for many Palestinians.”

Once again listeners were not informed that recent IDF operations in the Jenin area are linked to a wave of violent terror attacks against Israelis. Neither were they told that the part of Jenin which is still classed as a ‘refugee camp’, despite being under exclusive Palestinian Authority rule for over a quarter of a century, is at the same time indeed a “stronghold” for terrorist groups – as the Palestinian Authority knows only too well.

Copnall then again misled audiences with regard to the title of his next interviewee:

Copnall: “Well for more on the killing of Shireen Abu Akleh, we spoke to someone who knew her: Palestine’s ambassador to the UK, Dr Husam Zomlot.”

As ever, the diatribe presented by Husam Zomlot went unchallenged by the BBC presenter. Zomlot described Abu Akleh’s job as “covering Israeli brutality in Palestine” and claimed that she was from “the occupied city of Jerusalem”. Referring to Copnall’s earlier reference to the Israel Defence Forces (IDF), Zomlot ranted:

Zomlot: “And there is nothing defence about Israeli forces…those are occupying forces. They were invading the Jenin refugee camp.”

Copnall failed to challenge Zomlot’s unevidenced claim that “an Israeli sniper shot her in the head” or the later claim that “medics are being targeted”. He failed to react to Zomlot’s allegation that the incident “is a war crime” before ticking the ‘impartiality’ box.

Copnall: “The Israeli military is saying that its forces came under attack with heavy gunfire and explosives. It’s investigating the event. It’s looking into the possibility that the journalists were hit by Palestinian gunmen.”

Zomlot: “Well the Israeli forces are always in a campaign of misinformation and disinformation, covering up their crimes. Their crimes are very well documented. Her colleague, a journalist who was standing by her and who carried her, was shot as well but luckily did not die. He gave a full account of what happened, that they were directly targeted by the invading military. In a refugee camp you don’t have an equivalence of two sides. It is only one side that is the occupying force invading via armoured vehicles, heavily armed and they are in full control of the area. Shireen was vividly and clearly shown as a press person, as a journalist and therefore we consider this to be a direct, deliberate assassination of a prominent Palestinian journalist and we demand justice and accountability. Israel does this for 74 years for one reason: a lack…a lack…”

Copnall could have pointed out at that time that even if it is proved that Abu Akleh was killed by Israeli fire, there is still a big difference between that and a “deliberate assassination”. He could also have clarified that the majority of journalists killed in the region since 1992 were caught up in crossfire rather than ‘assassinated’. Instead he told Zomlot “I understand the point you wish to make” before asking him about Abu Akleh herself. Zomlot as ever picked up on that cue to advance more of his typically dramatic propaganda.

Zomlot: “…and today Israel did not assassinate only Shireen. She assassinated everybody who wanted to convey the truth, who wanted to bring out the message of the people of Palestine. It was not just the person of Shireen that was targeted; it was the truth, the press coverage, the media presence, everybody who wants to convey to the world what actually takes place. So this is the crime in every sense of the word and we demand that the International Criminal Court investigate immediately and that those who did this are brought to justice. Without this we are just waiting for another Palestinian prominent journalist to be killed by Israel, Another medic to be killed by Israel. Israel continues to do this because the international community would release some statements in a couple of hours – including the UK government – saying how concerned they are. And the lack of accountability and the lack of clear condemnation, alas, the situation will continue…”

Copnall then closed that interview, again telling listeners that they had been hearing from “Palestine’s ambassador to the UK”.

According to this programme’s website, it will remain available online for 29 days: 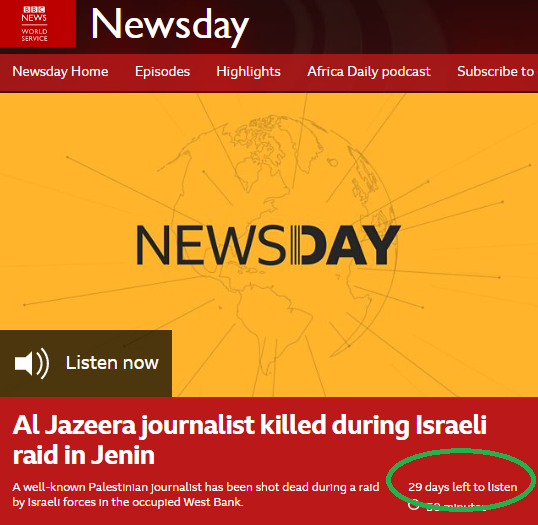 However, the BBC World Service quickly promoted a four-minute segment of that programme separately: 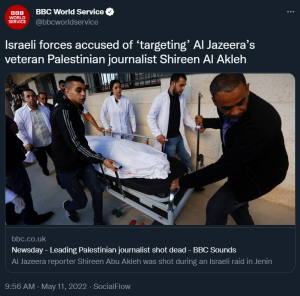 That segment includes only the interview with Husam Zomlot (who, coincidentally or not, met with the BBC’s Chairman only the day before), who is again described as “the Palestinian Ambassador to the UK”. 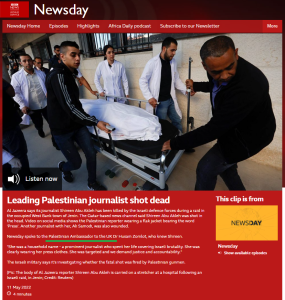 According to that webpage, Zomlot’s exploitation of the tragic incident in Jenin to advance his entirely predictable but as yet unverified and unevidenced propaganda – and only that – will remain online “for over a year”.