As we have previously documented (see ‘related articles’ below) early cross-platform BBC reporting on the shooting of an Al Jazeera journalist in Jenin on May 11th included wide promotion of the unevidenced claim from that organisation and additional sources that she had been “deliberately targeted” by Israeli forces.

However, the edition of the BBC World Service radio programme ‘OS’ aired on the afternoon of May 11th took promotion of that allegation to another level.

Nearly half that programme’s airtime was devoted to the topic of the death of Shireen Abu Akleh.

“Shireen Abu Aqla, a veteran Palestinian-American correspondent for Al Jazeera has been killed while covering a raid by Israeli forces in the occupied West Bank. We hear from those closest to her and get a sense of the impact her death is having on people in the region.” 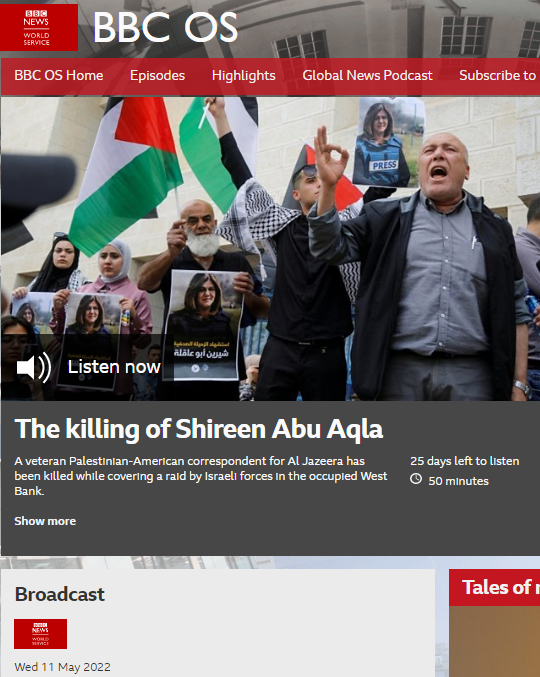 Presenter Karnagie Sharp – who is apparently unaware of the fact that Jenin has been under Palestinian Authority control for the last 26 years – introduced the first 13-minute section on that topic from 00:27 here. [emphasis in italics in the original, emphasis in bold added]

Sharp: “First let’s start with the story of Shireen Abu Akleh, the Al Jazeera journalist who has been shot dead while reporting. She was covering a raid by Israeli forces in the Palestinian city of Jenin. It’s the territory occupied by Israel known as the West Bank. Now she was a household name in the Arabic speaking world. A 51-year-old Palestinian-American. There’s been a huge outpouring of grief and anger from those who watched her reporting and those who worked with her. Her TV network, based in Qatar, said she was shot deliberately and in cold blood by Israeli troops. Her producer was also shot and wounded. Now Israel’s prime minister said it was likely that they were shot by Palestinian gunmen during an exchange of fire. We’ll hear from our correspondent shortly about what we know for sure about what happened but first let’s hear from someone who was very close to Shireen. I’ve been speaking to Faten Alwan who’s a Palestinian journalist. When we spoke she was in an ambulance helping to take her friend’s body back to her home in Ramallah. That’s why you hear sirens in the background. […]”

The version of the incident which the BBC’s worldwide listeners heard from Faten Alwan conformed to the Palestinian/Al Jazeera narrative.

Alwan: “…and she [Abu Akleh] want everyone to tell her story; how it was at [unintelligible] in the morning that Israel tried to twist the story that she was killed first by Palestinian gunshot and then that no, she was not wearing her hat or her armour and then putting it – like all the lies. All the videos are clear. She was in a safe spot. And being killed that way or having the shot in your head, it’s only a sniper action and in the area that she was standing […] so that was the safe area for journalists there.”

Alwan noted that she had spent “5 hours trying to get her out of Jenin” but made no mention of the Palestinian gunmen who paraded Abu Akleh’s body through the streets of that town. Alwan described her friend as “the sound of the truth” and “the voice of all the people in Palestine” who wanted to tell “the cruelty that happen in Palestine”. Unsurprisingly, Alwan’s own experiences of Palestinian Authority security forces attacking journalists did not make it into the story.

Sharp told Alwan that: “I can’t reiterate how sorry we are to hear the death of Shireen. We’ve been hearing about it the entire morning. As journalists ourselves, as we woke to the news…”. She next brought in Tim Franks:

Sharp: “I asked him to tell me what we know for sure about how she was killed.”

Franks however once again did not stick to “what we know for sure” in his account.

Sharp then introduced a topic which would reappear later in the programme:

Sharp: “Very curious to know; we’ve been speaking to journalists who say that they feel particularly vulnerable because they are Palestinian. Do you get the sense of that? That is definitely the case there?”

Franks: “Well look, you have to respect what people say and if you’ve got Palestinian journalists saying that they do not feel protected by them clearly identifying themselves as press, you know, that is the way they feel. The Israeli authorities insist very strongly that they have no policy of targeting the press. They say Israel rejoices in having a free press. But, you know, in the West Bank it’s the Israeli military that is carrying out a lot of these operations often in, you know, what are quite hostile circumstances. So Palestinian journalists say that they do feel that they take their life in their hands and that the Israeli security forces are often fast and loose with the amount of force that they do employ.”

Apparently Franks is unfamiliar with the IDF’s rules of engagement.

Sharp: “Right, we return to one of our top stories dominating conversations in the Middle East – the killing of the Palestinian-American journalist Shireen Abu Akleh in the occupied West Bank city of Jenin. Now Shireen was shot dead while reporting for Al Jazeera on a raid there by Israeli forces. Al Jazeera says she was shot deliberately and in cold blood by Israeli troops. Now Israel’s prime minister said it was likely they were shot by Palestinian gunmen during an exchange of fire. Her producer Ali Samoudi was also shot and wounded. He spoke to the BBC World Service from his hospital bed where he is in a stable condition. This is an account of what happened in the attack.”

Recording Samoudi: “We moving through the area where the soldiers doing the operation. We choose the area ogen [phonetic] – area ogen, the street it’s ogen and Israeli [unintelligible] saw us after we started when we move. Suddenly I listen to the shots. We are scared. After that Shireen…they shoot us. I am running. When I am running they shoot another bullet and I am injured in this moment. Shireen saw me and she said the last words. She said ‘Ali injured’. She tried to escape to the area and I am running. I am go to car and she, the car, take me to the hospital. But the Israeli soldiers still shooting and she injured. Shireen injured and she killed.”

In addition to tributes to Abu Akleh, listeners heard Abukhater and Abed promote the libel that journalists are targeted by Israel, without any questioning from Sharp on either that topic or the interesting definitions of a Palestinian journalist’s role presented by her two interviewees.

Abed: “Well this is not the first time that a Palestinian journalist has followed the news of the death or the killing of fellow journalists.”

Abukhater: “Here in Palestine we always feel as targets. […] When we are covering what goes on in Jerusalem we cannot distinguish between being a journalist or being Palestinian because we feel that the violence, the brutality, does not distinguish between both. The risks associated with being a journalist in Palestine have always been grave. Since 2000, 55 journalists were killed during the line of duty in Palestine and in Gaza itself, Gaza is an example where Israel had targeted, often claiming that they haven’t intended to, but I think in 2014 during the invasion on Gaza, over a dozen Palestinian journalists were killed during various forms of bombing. Just last year the offices of Al Jazeera and Associated Press were bombed, targeted intentionally in Gaza. So we know that journalists who expose the realities on the ground in Palestine often feel like they are a target either through travel bans or through injuries from bullets or else. And it’s not an easy job to give a voice to the voiceless. It’s not easy to tell the world the story of Palestine but Shireen was the biggest and the most inspiring figure who had done so for the past three decades. […] And journalists do believe that they are doing a duty for their home by delivering the messages of the people…”

Abed: “As I mentioned there has been several other cases where Palestinian journalists were also targeted and killed by Israeli forces and I remember clearly the case of Yasser Murtaja, the photojournalist from Gaza who was shot during his coverage of protests in Gaza. The fact that journalist in a war zone at large are not immune to gunfire is a well-known fact. It’s the general situation that we deal with. But the fact that they are often deliberately targeted by Israeli forces is what makes it much worse for Palestinian journalists…”

Readers may recall that the Jala Tower in Gaza City was not only used by Al Jazeera and AP but also housed Hamas military assets. Then as now, Al Jazeera’s accusation that Israel was “trying to silence journalists” was uncritically amplified by the BBC.

As for Abukhater’s claim that “since 2000, 55 journalists were killed”, as recently noted by our colleague Adam Levick, the Committee to Protect Journalists has a thorough list which reports that 19 journalists have been killed in Israel and the Palestinian territories in a database going back to 1992.  Most were killed by “crossfire”, with one intentionally murdered – by Palestinians.

The cases of “over a dozen Palestinian journalists” who Abukhater claimed were killed in 2014 were analysed by the ITIC which found that almost half of them were Hamas or Palestinian Islamic Jihad operatives.

Abed’s reference to Yasser Murtaja of course omitted the fact that in addition to being a photojournalist, he was also a Hamas operative.

Karnagie Sharp made no attempt whatsoever to provide listeners with any of that essential information before going on to amplify Al Jazeera’s allegations once again.

Sharp: “Now I mentioned that the network Shireen worked for – Al Jazeera – had accused the Israeli military of deliberately targeting journalists. It’s something that Israel’s prime minister Naftali Bennett has denied. Let’s hear what a spokesman for the Israeli embassy in the UK, Ohad Zemet, told the BBC.”

The short recording in which Zemet was heard saying “You cannot claim that Israel as a democratic country that hold freedom of press are targeting journalists. This is absurd claim to make.” was the sole Israeli viewpoint heard in the entire programme – and clearly an ‘impartiality box’ ticker.

Sharp ended the item by bringing in Lyse Doucet – located in Ukraine – for another tribute to Abu Akleh.

Doucet: “It’s a story that resonates with the media community worldwide.”

Doucet mentioned that in her current location, some eight Ukranian and international journalists have been killed since the beginning of the Russian invasion. Notably, the killings of those journalists have received nowhere near the scale of coverage that the BBC has elected to give to the death of Shireen Abu Akleh:

Brent Renaud: US journalist and filmmaker killed in Ukraine

Ukrainian photojournalist Maks Levin ‘put a face to the suffering’

As much as “the media community” may be saddened and shocked by Shireen Abu Akleh’s tragic death, BBC journalists should still be professional enough to be able to report the story accurately, impartially and proportionately. That should include asking themselves how the story is being exploited by interested parties, including the long problematic Qatari state media outlet and conscripted local journalists, for the wider purpose of deligitimisation of Israel by means of lies and libels.