When Abba Eban died in 2002, the BBC News website reported that:

The statement misquoted by the BBC referred to chances to put an end to the Arab-Israeli conflict and since Eban made it in late 1973, some Arab nations have indeed grasped opportunities to change their relations with Israel for the better.

As for the Palestinians, the record shows that while conflict resolution (even among their own factions) is not on their list of priorities, they are in fact very good at grasping opportunities of a different kind.

The exploitation of events such as religious holidays, anniversaries, the relocation of an embassy, an unfortunately timed chapter in a decades-long legal case or a global pandemic for the purpose of delegitimisation of Israel and/or incitement to violence on the ground should hardly come as a surprise to any veteran Middle East observer.

So when the Al Jazeera journalist Shireen Abu Akleh was killed in Jenin on May 11th in circumstances that are still unclear, it was entirely predictable that such an event, like others before it, would be exploited by interested parties.

As we have documented (see ‘related articles’ below), BBC journalists adopted and amplified the narratives created by Palestinian factions, the totalitarian state Qatar and its media arm Al Jazeera in exceedingly generous cross-platform coverage of that story. Unevidenced accounts and interpretations of the event itself, along with allegations that Israel deliberately targets journalists, were unquestioningly promoted worldwide by a media organisation (and individual employees) supposedly committed to rigorous standards of accuracy and impartiality.

The second chapter in that story came on May 13th when Shireen Abu Akleh’s funeral took place in Jerusalem. When her body reached Qalandiya after being transported by ambulance from Ramallah, armed Palestinians indiscriminately discharged volleys of gunfire. The body was then transported to a hospital in Jerusalem. As reported by the Washington Post and others, the funeral arrangements had been coordinated in advance with her family:

“Her funeral route had been agreed upon by police and Abu Akleh’s family, according to media reports, and was to include the carrying of her body by hearse to a Catholic church in Jerusalem’s Old City, and then a procession to the Christian cemetery where she was to be buried in a family plot.

By noon, a crowd of several hundred formed at the entrance to St. Joseph’s Hospital in East Jerusalem, where Abu Akleh’s body had rested overnight. In the minutes before the procession was due to leave the hospital, several dozen Muslim men lined up for Friday prayers, kneeling in the parking lot. Behind them, two mourners held up large floral crosses. Then the crowd gathered, with Palestinian flags waving. […]

But a group of men in the crowd prevented a hearse from backing up to the hospital door, saying they were intent on carrying her body on their shoulders. The standoff eventually prompted Akleh’s brother, sitting on a man’s shoulders, to beseech the crowd to let the hearse through. “For God’s sake, let us put her in the car and finish the day,” he said.

“On the shoulder, on the shoulder!” people chanted, and beat the hearse with sticks until it pulled away for a second time. The crowd cheered when the men eventually dragged the coffin out on their shoulders, followed by a stretcher carrying the journalist’s blue bullet-resistant vest.

But Israeli police at the hospital gate refused to let the crowd through and, within minutes, a squad in riot gear pushed forward, setting off stun grenades and beating back the mourners with truncheons. People scattered amid a cascade of thrown bottles and rocks. At one point, Abu Akleh’s coffin lurched toward the ground, but the pallbearers managed to keep it aloft.”

On May 13th the BBC News website published three reports – two filmed and one written – on the topic of Abu Akleh’s funeral:

Violence breaks out at Shireen Abu Aqla’s funeral in Jerusalem 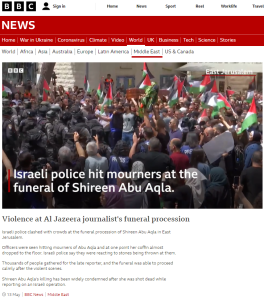 “Israeli police hit mourners at the funeral of Shireen Abu Aqla. The Al Jazeera reporter’s killing in the occupied West Bank has caused a surge of anger. At one point the late journalist’s coffin almost slips after police, some using batons, waded into a crowd of Palestinians gathered around it. Police say they were reacting to stones being thrown at them. Abu Aqla was shot dead while reporting on an Israeli operation. Three journalists present say she was hit by Israeli fire. Israel accepts this is possible but maintains Palestinian gunmen could have fired the fatal shot.”

The article features an account from the scene from the BBC Jerusalem bureau’s Tom Bateman which includes the following: [emphasis added] 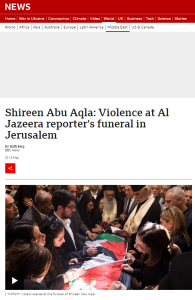 “The coffin was brought out of the building carried by a group of pallbearers. While the plan was for the procession to the church to use the hearse, the coffin was now being carried towards the closed gates.

What happened next was extraordinary. I was behind the packed crowd so I couldn’t see the front point of contact, but the Israeli police suddenly pushed back the crowd, including the coffin and its carriers.

They fired stun grenades towards the mourners and the press and were storming into the compound. From my vantage point – not at the front of the crowd – I saw a couple of plastic bottles being thrown back, nothing more.”

Another journalist present at the scene managed to document glass bottles and rocks being thrown at the police, as did others.

“The UN Security Council has condemned the killing of veteran Al Jazeera reporter Shireen Abu Aqla and called for an immediate probe into her death.

The move followed outcry on Friday after Israeli police hit mourners at Abu Aqla’s funeral. Police said they acted after being pelted with stones. […]

During Abu Aqla’s funeral on Friday, her coffin almost fell as police, some using batons, waded into a crowd of Palestinians gathered around it.

Footage showed a standoff between police and Palestinians gathered around the coffin in a hospital compound, before officers pushed the crowd back, with some beating and kicking mourners. Israeli police said on Saturday that an investigation into the incident was being launched.”

“During Abu Aqla’s funeral on Friday, her coffin almost fell as police, some using batons, waded into a crowd of Palestinians gathered around it.

Footage showed a standoff between police and Palestinians gathered around the coffin in a hospital compound, before officers pushed the crowd back, with some beating and kicking mourners. Police said officers “were forced to use riot dispersal means” after they had been pelted with stones.” 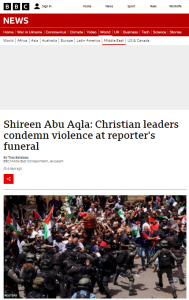 “The Vatican’s representative in Jerusalem has accused Israel of “brutally violating” a decades-old agreement to uphold religious freedom.

It follows Friday’s attack by Israeli police on the funeral of Palestinian-American journalist Shireen Abu Aqla.

Officers kicked and beat pallbearers and fired stun grenades into the crowd of mourners at St Joseph Hospital.”

Bateman’s report goes on to mention a supposedly “discredited” claim but without clarifying by whom:

“The [police] force has defended its actions on the day. It has said 300 “rioters arrived” at the hospital, but this has claim been discredited. It has said some people threw stones and it was protecting the funeral plans agreed by the family to use a hearse.

It has said this is why it stopped the coffin being taken on foot from the compound. However, the family has categorically rejected the police version of events.

At Palestinian funerals, the coffin or stretcher is frequently carried by hand in public as a mark of popular tribute, especially at the passing of a notable figure. At such events it is also not uncommon for plans to change suddenly if more people want to pay their respects.”

Bateman chose to gloss over the fact that this particular “Palestinian funeral” was taking place in Israel’s capital city and that any sudden changes of plan were not conducive to keeping the peace in what was clearly potentially a very volatile situation.

In addition to presenting accounts of the short incident preceding the funeral itself that overwhelmingly promote a one-sided view of events, all the above reports once again promote the narrative advanced by Al Jazeera and others regarding the circumstances of Abu Akleh’s death.

It is of course worth remembering that no matter what the inquiry into the incident at Abu Akleh’s funeral and investigations into the circumstances of her death eventually reveal (if anything), these unabashed promotions of narratives advanced by opportunistic interested parties will remain – unamended – in the public domain of the BBC News website, just as grossly inaccurate and inflammatory accounts of another story from Jenin are still available online twenty years later.