Over the past week the BBC News website’s ‘Middle East’ page has published two reports by Raffi Berg concerning a political upheaval in Israel’s coalition government.

Both reports include similar statements: 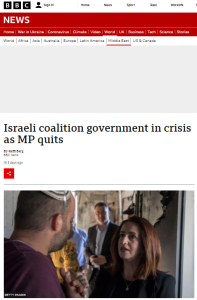 Article 1: “Led by nationalist Prime Minister Naftali Bennett, it [the coalition] brought together eight parties from across the political spectrum, some with major ideological differences.

Significantly, the government included an independent Arab party for the first time since the state was founded in 1948.”

Article 2: “Led by nationalist Prime Minister Naftali Bennett, the coalition – the most diverse in the country’s history – brought together eight parties from across the political spectrum, some with major ideological differences.

Significantly, the government includes an independent Arab party for the first time since the state was founded in 1948.”

If that reference to “an independent Arab party” sounds familiar that may be because in June 2021, as Israel’s current government came into being, the BBC News website published three articles which used the same phrase. As we noted at the time:

“All three of those reports include the following:

“In appearance, Mr Bennett’s government would be unlike any which has preceded it in Israel’s 73-year history. The alliance contains parties which have vast ideological differences, and perhaps most significantly includes the first independent Arab party to be part of a potential ruling coalition, Raam.”

Most readers would probably not pay too much attention to the use of the word “independent” in that second sentence but it does have a purpose and that is to relieve the writer of the need to point out that the Mapai associated Arab parties ‘Progress and Development” and “Cooperation and Brotherhood” were part of Israel’s ninth government (1959 – 1961) and subsequent ones.” 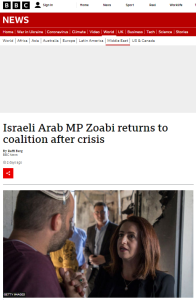 So while Ra’am may indeed be the first “independent Arab party” to be part of an Israeli government “for the first time since the state was founded in 1948”, the fact that the BBC’s portrayal does not clarify that affiliated Arab parties were part of all of Israel’s governments until 1974 and that Arab and Druze Israelis have been members of other parties that have been part of coalition governments throughout Israel’s history clearly distorts the picture and misleads readers.

That omission is of course all the more relevant when, as is the case in both Berg’s reports, the very next sentence tells readers that:

“Israel’s Arab minority comprises about 20% of the population and although they have equal rights under the law, they often complain of discrimination.”