On May 28th the BBC News website’s ‘Asia’ and ‘Middle East’ pages carried a report tagged ‘Israel’ and titled ‘Japanese Red Army founder Shigenobu freed after 20 years’ which was illustrated with a photograph of its topic draped in a keffiyeh. 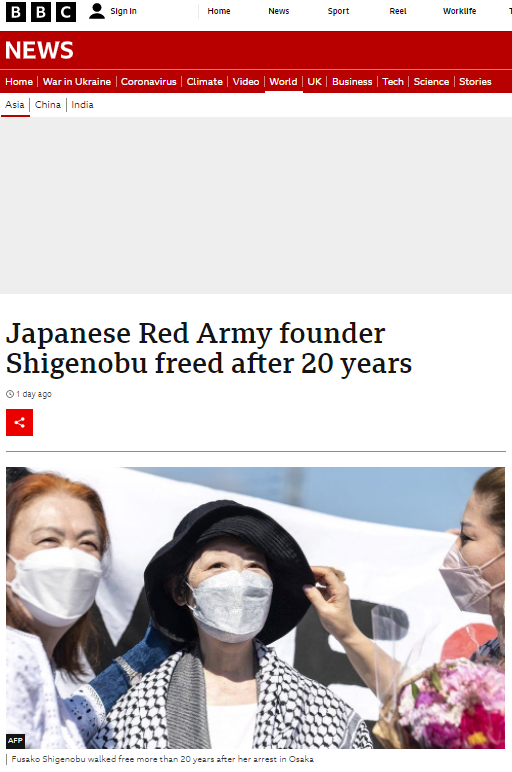 No explanation of Shigenobu’s sartorial choice was provided and unlike other media outlets, the BBC did not report that some of those waiting for her outside the Tokyo prison were “waving Palestinian flags” or that Palestinian NGOs celebrated her release.

A caption to one of the other photographs in the BBC’s report informs readers that Shigenobu “spent 30 years living in the Middle East”. The report itself tells readers that:

“Her once-feared group had aimed to provoke a global socialist revolution through high-profile terror acts.

They carried out a series of hostage-takings and hijackings, as well as a deadly attack on an Israeli airport. […]

She has previously expressed regret for 26 deaths caused by an attack on Tel Aviv’s Lod Airport in 1972.”

At no point does the BBC’s report mention that the May 1972 terror attack at Israel’s international airport was carried out by Japanese Red Army members recruited by the PFLP. However archive material shows that the corporation is well aware of that fact:

“The Popular Front for the Liberation of Palestine said they had recruited the gunmen from the Japanese Red Army and said they “came from thousands of miles away to join the Palestinian people in their struggle”.” [source]

“The gunmen were hired by the Popular Front for the Liberation of Palestine, who said they had recruited the trio from Japan’s Red Army terror group, to carry out the attack, in revenge for the killing of two Arab hijackers earlier in May.” [source]

“It is 40 years since Japanese gunmen attacked the Lod airport in Tel Aviv, Israel. They were left-wing militants working for a Palestinian organisation.” [source]

Indeed, just two days after this article was published, on the 50th anniversary of that terror attack, BBC World Service radio’s ‘Witness History’ aired a programme with the following synopsis:

“In May 1972, Japanese gunmen attacked Lod airport in Tel Aviv, Israel. They were left-wing militants working for a Palestinian organisation. Twenty-six people were killed that day and more than 70 others were injured.”

At the bottom of the short report readers are offered two items of additional reading. In one, dating from 2006, the BBC states that:

“The group [JRA] is best known for its suspected [sic] involvement in a machine-gun attack on Lod Airport in Israel in 1972, in which more than 20 people died.

Shigenobu has expressed regret for the deaths but defended the attack, which was carried out in co-operation with the militant Popular Front for the Liberation of Palestine.”

In the other, dating from 2011, the BBC describes members of a Palestinian terrorist organisation as “freedom fighters”:

“As the daughter of the Japanese Red Army’s founder and a Palestinian freedom fighter, May Shigenobu grew up on the run.”

Despite Shigenobu’s terrorist activities being inextricably linked to the PFLP terrorist organisation, the BBC has managed to completely erase that part of the story from this report.