The May print edition of the British current affairs magazine Private Eye included the following cartoon by Graeme Keyes: 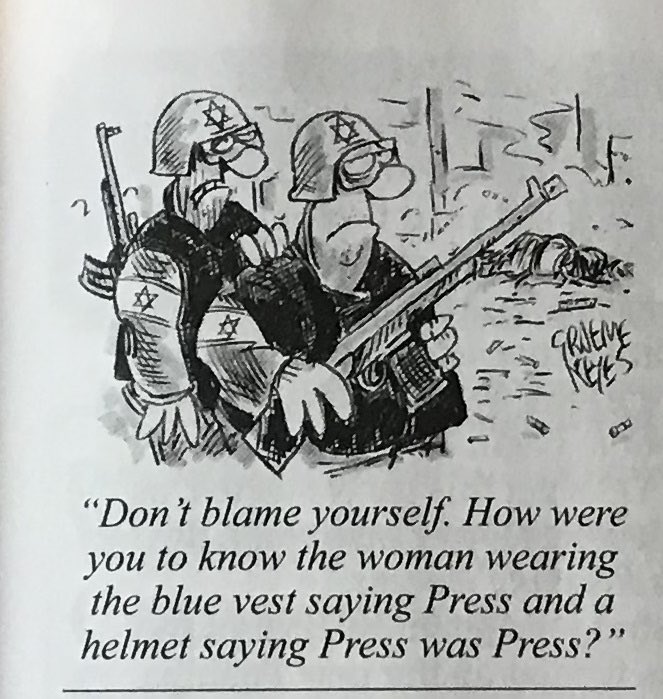 First, regarding the visual portrayal of Israeli soldiers: though the large noses of the Jewish soldiers was, at fist glance, extremely troubling, we were able to find at least one other cartoon Keyes published depicting another army’s soldiers with similar features.  So, we don’t feel there’s anything antisemitic about it.

What disturbs us about the cartoon is the supremely dishonest premise that Al Jazeera’s Shireen Abu Akleh was definitely killed by Israeli soldiers, despite increasing evidence raising doubts about such a conclusion; and the curious Palestinian refusal to hand over the bullet that killed Abu Akleh.

Assuming, as if it were an established fact, that Israel killed Abu Akleh, despite the dearth of any real evidence, isn’t something even the Guardian has done.

Further, the caption of the cartoon erroneously suggests that, if it turns out that Israeli soldiers did fire the shot that killed the journalist, it must have been intentional, as opposed to accidental.  This premise flies in the face of the fact that the human rights organisation Freedom House confirms that Israel is generally a hospitable place for journalists to do their work, ranking Israel’s ranking three out of a high score of four, whilst the Palestinian territories are ranked just one out of four.  Moreover, according to the Committee to Protect Journalist, only one of the nineteen journalists killed in the region since 1992 was shot intentionally (as opposed to being killed in crossfire during conflict), and he (Suleiman Abdul-Rahim al-Ashi ) was murdered by Palestinian authorities – not Israel.

This leads to the other element of our post: the following Private Eye satirical article which appeared on the same page as the cartoon:

Though we don’t fancy ourselves experts at satire, it’s difficult to find the humour in this.  What’s their point? That the suggestion Palestinian snipers operating in Jenin that day may have killed Abu Akleh is simply CRAZY, and part of a pattern of Israeli authorities accusing Palestinians of crimes they didn’t commit? Are editors at Private Eye so clueless as to not be cognizant of the fact that the opposite is the truth – that Palestinian officials, the ruling Fatah party and PA controlled media outlets (no to mention pro-Palestinian activists in the West) routinely peddle hateful lies about Israel and Jews?

As we’ve made clear previously, we are fierce defenders of free speech, and if editors at the Private Eye want to continue beclowning themselves by commenting on the Israeli-Palestinian Conflict – a topic they clearly know little about – we support their right to do so.