On June 2nd the BBC News website published a report by Yolande Knell titled ‘Israel and Palestinians in flag furore amid ban move’ on its ‘Middle East’ page. 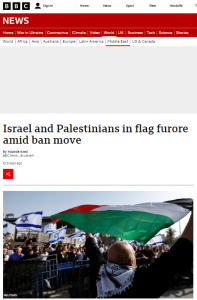 That report begins by signposting a proposed law as “controversial” and goes on to make confusing use of the word ‘votes’:

“Israel’s parliament has voted in favour of a controversial bill which could see the display of “enemy flags” – including the Palestinian one – being outlawed at state-funded institutions.

The Knesset approved the legislation in its preliminary reading, with 63 votes for and 16 against. Three further votes are needed for it to become law.”

To clarify; three further readings of the bill are necessary in order for it to become law.

Knell goes on to tell readers that:

“A furore over flags had already reached new heights on Wednesday with a giant billboard showing a Palestinian flag – put up by an Israeli pressure group – being removed from a skyscraper just outside Tel Aviv, while an Israeli one remained in place.”

Linking to a report at the Jerusalem Post, Knell refers to an incident at Ben Gurion University in Be’er Sheva last month as the cause of “[a]n Israeli debate over the legality of the Palestinian flag”. As usual, she fails to inform readers that the war which she claims “followed Israel’s establishment” – along with the “displacement of Palestinians” – actually began before Israel’s declaration of independence and was initiated by Arab states in the region and Arabs living in what was known at the time as Palestine.

“An Israeli debate over the legality of the Palestinian flag was prompted by events at which they were waved, including at Ben Gurion University in the Negev, to mark Nakba Day.

The date, which falls on 15 May each year, commemorates the mass displacement of Palestinians in the war which followed Israel’s establishment in 1948.”

Knell goes on to opine:

“Flags are always potent symbols in the Israel-Palestinian conflict, but high-profile news stories in the past few weeks have shown them causing new levels of contention.”

Among the news stories she cites is the May 13th funeral of the Al Jazeera journalist shot in Jenin. Knell’s portrayal of events implies that the actions of the police on that day were related solely to the appearance of Palestinian flags at that event and she erases factors such as attempts to disrupt the pre-coordinated funeral arrangements.

Another story is portrayed by Knell as follows:

“In recent weeks, Israeli soldiers have been filmed taking down Palestinian flags from lampposts and guarding Jewish settlers as they took down flags in in the Palestinian West Bank town of Huwara.

One video, which went viral on social media, showed soldiers keeping angry Palestinian residents back by pointing guns at them and using a stun grenade.

Such a step is unusual as Huwara – on a main road between Ramallah and Nablus – is under PA administration.”

Huwara – or Hawara – is located in Area B (and on a main road) and hence under the terms of the Oslo Accords, it is indeed under PA civil administration but also under Israeli security control.

Readers then discover that there is one type of flag flying which, according to Knell, is “nationalist” and “provocative”:

Thousands of Israelis waving blue and white Israeli flags marched through Muslim areas of the Old City in East Jerusalem in the annual event, which is always seen as highly provocative by Palestinians.

Israeli police chased after a handful of Palestinian activists who brought out their own flags and Palestinians celebrated as, for a short time, a drone flew a Palestinian flag over Damascus Gate.”

Interestingly, the display of Palestinian flags in Israeli cities such as the capital Jerusalem, Be’er Sheva or Ramat Gan does not prompt Yolande Knell to use adjectives such as “provocative”. In previous BBC reporting on Jerusalem Day celebrations, Israelis carrying flags in the capital city were described as “nationalists” while Palestinians doing the same are, according to Knell, merely “activists”. Flags of a different kind flown in Jerusalem recently received positive coverage from the BBC and we have yet to find the displays of national flags (including an incorrect one) in Britain’s capital city and elsewhere last weekend described by the BBC as “nationalist” or “provocative”.

Linking to the political NGO ‘Passia’, Knell closes her report with the suggestion that the Palestinians have had a flag since 1916.

“For decades, Palestinians have found innovative ways to get around Israeli restrictions on the waving of their flag, which dates to the 1916 Arab Revolt against forces of the Ottoman empire.”

Knell’s account refrains from mentioning that the Arab Revolt flag was not intended to represent a Palestinian state but rather “a united Arab state that would include modern-day Syria, Lebanon, Israel and Palestinian territories”.