On the evening of Saturday, June 4th the BBC Jerusalem bureau’s Tom Bateman Quote Tweeted an item posted by an Israeli journalist earlier in the day, adding his own commentary: 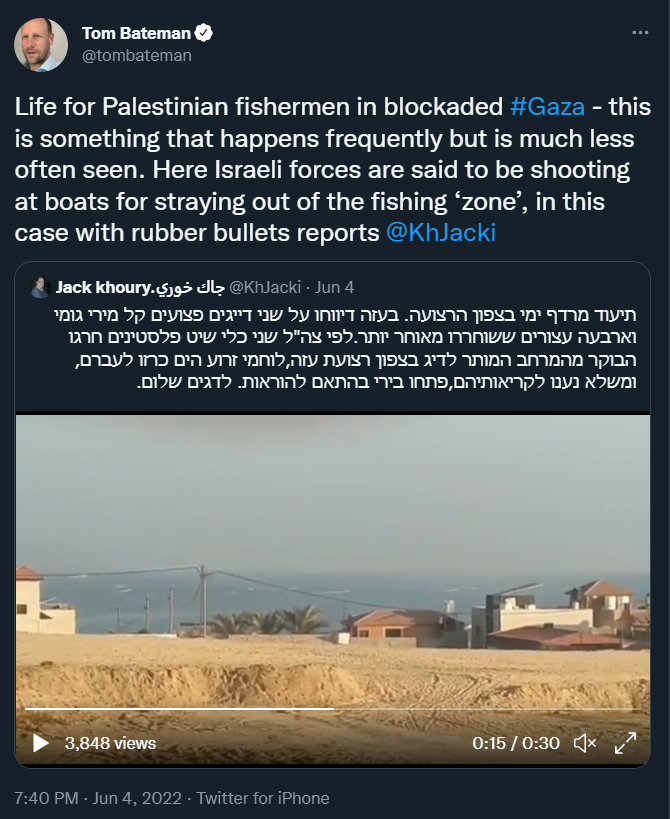 In fact, Khouri’s Tweet states that rubber bullets were fired because – as also reported by Reuters – the two vessels that sailed beyond the designated fishing zone in the northern Gaza Strip failed to respond to verbal instructions to stop.

As we see, Bateman made no effort to inform his thirteen thousand followers why that fishing zone exists. Readers may recall that a year ago Bateman produced a filmed report on the topic of fishing in the Gaza Strip in which the only explanations of why limitations are imposed on the Gaza fishing zone came in two “Israel says” sentences:

“Now Israel says it imposes this as part of its blockade of Gaza to prevent weapons getting to Hamas and other militant groups.”

“Israel says it only acts to defend itself and to secure the area near the Gaza Strip.”

As we noted at the time, Bateman failed to tell BBC audiences about the many cases of arms smuggling by sea that explain what “Israel says” but are serially ignored by the BBC. Just last month Israel announced that it had foiled an attempt by ‘fishermen’ to smuggle components for weapons production but, as usual, that story did not receive any BBC coverage.

Bateman’s 2021 report also failed to provide BBC audiences with any information about the relevant agreements between Israel and the Palestinians concerning security along the coastline and maritime activity zones.

While it would not be surprising to see politically motivated activists or interested parties Tweeting one-sided and superficial messaging about “life for Palestinian fishermen in blockaded Gaza”, one would expect a supposedly impartial BBC journalist to explain an incident he obviously considered important enough to comment upon in a manner that includes the background information essential for its understanding.