On June 10th a report published on the BBC News website’s ‘Lancashire’ page was also promoted in the ‘updates’ section of its ‘Middle East’ page.

“A councillor has been suspended after allegedly making anti-Semitic comments at a meeting.”

However, as several people have pointed out on social media, the BBC’s report fails to adequately explain what those comments were.

“Mr Iqbal is alleged to have made comments comparing Nazi Germany’s persecution of Jewish people with more recent events in Ukraine and elsewhere in the world.

The International Holocaust Remembrance Alliance’s definition of anti-Semitism, which has been adopted in full by the Labour Party, states that any comparison of contemporary Israeli policy to that of Nazi Germany is anti-Semitic.”

Clearly readers would have difficulty understanding how that part of the IHRA definition of antisemitism applies to what the BBC describes as comments about “Ukraine and elsewhere in the world”.

The Jewish Chronicle reported that:

“Last month, after moving a motion calling for the Palestinian flag to fly from the town hall, Mr Iqbal said: “The fact is that what’s going on in Ukraine, Palestine, and other areas I’ve mentioned, reminds me, I barely passed my GCSE history at school, but many people in this room will remember what justification Hitler had for what he did to the Jews in the Second World War.””

As we see, rather than accurately reporting Mohammed Iqbal’s comments in a manner that would enable readers to understand why he has been suspended pending investigation, the BBC instead chose to paraphrase his remarks in a vague way that hinders comprehension. 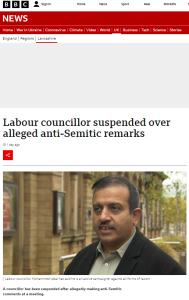 “Mohammed Iqbal, a Labour councillor in Lancashire, allegedly made the remarks in a council debate that discussed tensions between Israel and Palestine.”

“The gesture was to mark solidarity with Palestinians after the killing of female journalist Shireen Abu Aqla in Palestine in May.”

Readers may recall that the BBC Academy’s guide for journalists reporting on ‘Israel and the Palestinians’ (which was removed from public view in early 2021) states:

“…in day-to-day coverage of the Middle East you should not affix the name ‘Palestine’ to Gaza or the West Bank – rather, it is still an aspiration or an historical entity.”

The BBC’s funding public has still not been informed whether that “journalists’ guide to facts and terminology” – which was made public on the recommendation of the BBC Governors’ independent panel report on the impartiality of BBC coverage of the Israeli-Palestinian conflict in 2006 – is still in use.

If so, this report clearly breaches that style guide’s instructions. If not, then surely the BBC should explain to its audiences why its policy concerning a title it clearly understood a year ago to be “still an aspiration” has been reversed.