That short report gives a reasonable account of the signing of a memorandum of understanding between Israel, Egypt and the European Union concerning exports of natural gas from Israel’s offshore reserves. 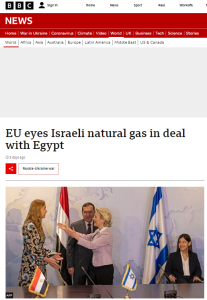 “EU nations seeking to reduce their reliance on Russian gas because of the war in Ukraine may soon be able to source supplies from Israel instead.

On Wednesday, the EU, Israel and Egypt signed a provisional natural gas export deal at an energy conference in Cairo.

The Israeli gas is expected to be sent to liquefaction plants in Egypt, then shipped north to markets in Europe.”

Two of Israel’s offshore fields – Tamar and Leviathan – are operational and Israel already exports gas to Egypt and Jordan. A third field – Karish – is expected to begin production later this year.

Interestingly, BBC audiences have to date heard nothing at all about the threats from Lebanon and Hizballah after a floating gas production rig arrived on site at the Karish field earlier this month.

“Lebanon warned Israel on Sunday against any “aggressive action” in disputed waters where both states hope to develop offshore energy, after a ship arrived off the coast to produce gas for Israel.

President Michel Aoun said any activity in the disputed area would amount to an act of aggression and a provocation, after the arrival of the natural gas storage and production ship operated by London-based Energean.

Israel says the field in question is within its exclusive economic zone, not in disputed waters.

But in a statement, the Lebanese presidency said Aoun discussed with caretaker Prime Minister Najib Mikati the vessel’s entry “into the disputed maritime area with Israel, and asked the Army Command to provide him with accurate and official data to build upon the matter.””

That maritime borders dispute was last covered by the BBC in October 2020:

Those talks went on intermittently until May 2021 when Lebanon presented additional demands. In January 2022 Lebanon stated that it was ready to resume negotiations but in May Hassan Nasrallah expressed opposition to the US-mediated talks.

‘“I am saying to the Lebanese state: If you want to continue negotiating, go ahead, but not in Naqoura, and not with Hochstein, Frankenstein, or any other Stein coming to Lebanon,” the terror chief said in an address to the Lebanese government.

“The path of negotiations, and especially via the conspiring, collaborating, and dishonest American broker who supports Israel, will not lead us to any results.”’

While some reports of a shift in the Lebanese position have appeared in recent days, local media outlets have reported preparations for any potential Hizballah attack on the Karish field and analysts have examined the terror organisation’s options and motives.

“Professor Boaz Ganor, founder and executive director of the International Institute for Counter-Terrorism in Herzliya, told JNS that two key variables need to be examined to ascertain the severity of Hezbollah’s threats: capability and intentions.

“Does Hezbollah have the ability to implement its threat and could the organization have the motivation and determination to hit the rig? The answer to the first question is apparently affirmative. Hezbollah has the proven ability to fire advanced shore-to-sea missiles to strike the rig. But the question of motivation is more complex,” said Ganor.

“I assess that Hezbollah understands that any strike on the Karish gas rig will lead to no less than war, including between Israel and Hezbollah, and the state that grants Hezbollah cover. Israel cannot contain such an attack and would extract a heavy price from Hezbollah. Hezbollah, in turn, cannot contain the Israeli reaction, and from here, the distance to full war is short,” he stated.”

Remarkably, BBC audiences have seen no coverage whatsoever of that particular offshore gas story, including the bellicose threats made by a terrorist organisation designated by the UK and amplified approvingly by a BBC contributor.