A report headlined ‘Three Palestinian militants killed amid West Bank clashes with Israeli troops’ was published on the BBC News website’s ‘Middle East’ page on the morning of June 17th, several hours after that incident had taken place. 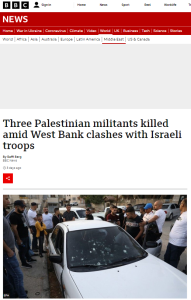 Written by Raffi Berg, the report opens with a similar portrayal of events:

The Israeli military said its forces returned fire “to neutralise” occupants of a car who had shot at them.”

Later in the report readers find claims from unidentified “witnesses”:

“Witnesses have told the BBC the Israeli army was carrying out a search raid in Jenin’s old town on Friday morning and that there were massive exchanges of gunfire between them and Palestinian militants.

The Israeli military said that as troops moved on from one location the occupants of a car at the side of the road opened fire. All those in the car were killed.”

Readers are not informed of the aim of that “search raid” or why those “exchanges of gunfire” began. The Jerusalem Post’s reporting of the same incident clarifies:

“The clashes broke out as IDF soldiers entered Jenin to confiscate illegal weapons from two locations, according to the IDF spokesperson.

As the soldiers approached the first target, they fell under heavy gunfire, and explosives were thrown at them. The soldiers responded with live fire.

On their way to the second target, soldiers from the elite Sayeret Golani noticed a suspicious vehicle on the side of the road. The occupants of the vehicle opened fire at the soldiers. Israeli forces shot back and killed the gunmen.

In the vehicle, the soldiers found two M-16 variant rifles, a Carlo submachine gun, magazines and a bulletproof jacket.”

In other words, what the BBC chose to portray as “clashes” took place because terrorists – which it predictably refrains from describing as such – elected to attack Israeli forces.

“Local sources told the BBC that all three men were members of militant groups in Jenin.

The militant Islamist group Hamas said one of the men was a field commander in its military wing. It warned the “cowardly assassination… will not go unpunished”.”

Readers are not told the names of the “three men”, to which terrorist organisations (rather than “militant groups”) they belonged or that Hamas’ claim – as explained at the Long War Journal – has not been confirmed.

“The first passenger was identified as Laith Sarour, a member of the U.S.-designated Foreign Terrorist Organization (FTO) al-Aqsa Martyrs Brigades.

In a statement via their official Telegram channel, al-Aqsa Martyrs Brigades mourned the death of Sarour saying his killing was a “cowardly assassination” carried out by the “forces of the Zionist enemy army.”

Bara’ Lahlouh and Yousef Salah, both members of Palestinian Islamic Jihad, a U.S.-designated FTO, were the other passengers identified in the vehicle.

A statement published by Palestinian Islamic Jihad after their deaths said “our mujahideen will not forgive this occupation’s heinous crime, and will not remain silent about its attacks against our people, and the resistance will remain on the lookout, adhering to Jihad as the only option to respond to these violations.”

By way of background, the BBC’s report states:

“The incident in Jenin is the most serious of its kind for weeks, as Israel carries out near daily raids following a wave of deadly attacks.

Seventeen Israelis and two Ukrainians have been killed in shootings, stabbings, car-rammings and an axe attack in Israel and the West Bank since late March.

Dozens of Palestinians, including the attackers, have been killed in confrontations with Israeli forces since then.”

As in previous BBC content concerning incidents in or around Jenin, no mention is made of the wider context of increased terrorist activity in Judea & Samaria (which predates the recent wave of terror attacks in Israel) including the establishment of a ‘Joint Operations Room’ in February.

Several hours after this article appeared a rocket was launched towards Ashkelon from the Gaza Strip. The BBC did not update its report to inform audiences of what some analysts saw as a related incident and the attack – which was successfully intercepted – was not covered by the BBC elsewhere.