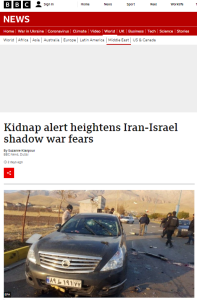 “The man set to become Israel’s interim prime minister next week has made an urgent trip to Turkey amid fears of an attack on Israeli tourists there by Iranian agents – as the long-running shadow war between the bitter foes becomes more open.”

Readers are not told the name of the man concerned and beyond that proffered link to a by then 12-day-old Reuters article, they are given no further information concerning those security alerts. No information is offered to support Kianpour’s claim that what she repeatedly portrays as a “shadow war” is in fact becoming “more open” – or to explain what that even means. As readers may recall, Iranian attacks on Israelis abroad go back many years.

“In an unprecedented move, Israel recently warned its citizens in Istanbul to leave the city and others not to travel to Turkey, saying they faced a “real and immediate danger” from Iranian agents looking to harm Israelis.”

The description of those travel warnings as “unprecedented” is not accurate: similar warnings have been issued in the past in relation to Turkey as well as India, the Sinai peninsula and other locations.

A warning concerning Turkey was issued on May 30th and additional warnings were put out in June. In the two days before the appearance of Kianpour’s article it was reported that three attacks had been thwarted and several people arrested but that obviously relevant information is completely absent from her report.

While readers are not provided with any details about those (or previous) attempted Iranian attacks on Israeli civilians, they do find extensive portrayal of events blamed on Israel by Iran, regardless of proof. The article also once again amplifies Iranian regime claims concerning an incident in Iraqi Kurdistan, despite conflicting reports.

“It [Iran] fired ballistic missiles at what it alleged was an Israeli “strategic centre” in Iraq’s Kurdistan Region in March.”

As is all too often the case in BBC content concerning Iran, this article quotes the regime loyalist Mohammad Marandi.

“Mohammad Marandi, a professor at the University of Tehran and media adviser to Iran’s nuclear negotiation team at the Vienna talks, said: “Murdering innocent civilians under Western political protection is nothing new for the Israeli regime, but the Israelis exaggerate their capabilities for political purposes by pretending that accidents and ordinary deaths are also their doing.””

“The shadow war between Israel and Iran now seems to be coming out of the shadows – even getting the Hollywood treatment in Apple TV show Tehran, in which a Mossad agent infiltrates the highest echelons of the Iranian Revolutionary Guards security apparatus.”

Apparently Kianpour is unaware of the fact that the Israeli public broadcaster Kan 11 (not “Hollywood”) drama series ‘Tehran’ was first aired in Israel two years ago in June 2020.

Despite the claim in its headline that “Kidnap alert heightens Iran-Israel shadow war fears”, this article fails to provide readers with any information about the actual recent events in Turkey which prompted such alerts. Neither does it explain who allegedly now has ‘heightened’ fears as a result or even what those “shadow war fears” supposedly are.

One can only hope that the “documentary later this year” on the same topic which Kianpour promises her Linkedin followers will be less superficial, less speculative and more fact-based than this written article.