If there is one thing that has been particularly striking about the last seven weeks of copious media coverage of the death of Shireen Abu Akleh it is just how ambivalent her fellow journalists are about finding out what really happened on the morning of May 11th in Jenin.

While the public has seen no shortage of tributes to Abu Akleh and ‘investigations’ into her death, it has been entirely obvious since very early on that no definitive conclusions about who did or did not shoot Abu Akleh can be reached so long as the Palestinian Authority refuses to let any other party examine the bullet in its possession.

For over a month and a half the Palestinian Authority has refused to cooperate with a joint investigation with Israeli and American representation. Although that may not come as much of a surprise to anyone familiar with the workings of the PA, what should raise eyebrows is its mute acceptance by the international press corps.

On the one hand journalists – including those at the BBC – are obviously very interested in keeping this story in the news cycle. On the other, the extraordinary circling of journalistic wagons evident from the minute that news of Abu Akleh’s death broke has not included any public demands from her concerned colleagues that the Palestinian Authority do the one, simple thing that would put an end to speculations and facilitate what is, after all, supposed to be the ‘holy grail’ of journalism: publicising the truth.

As we saw last week in the BBC News website’s report about another ‘investigation’ that clearly could not provide definitive conclusions, the tactic now being employed is to present the Palestinian Authority’s refusal to cooperate with ballistic analysis of the bullet it holds as an “Israel says” issue.

That tactic was on display again on June 27th when the BBC Radio 4 programme ‘Woman’s Hour’ – billed “Women’s voices and women’s lives – topical conversations to inform, challenge and inspire” – devoted over eight remarkably uninformative minutes to the topic. 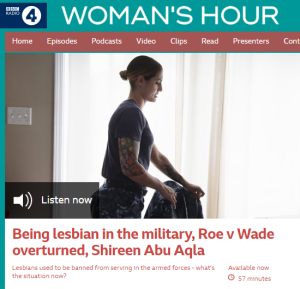 Presenter Emma Barnett introduced the item (from 48:46 here) with an explanation of its timing: a memorial service at a Fleet Street church in London. Neither at that point nor on the subsequent occasions when that memorial service was mentioned were listeners informed that it was organised and promoted (and later attended) by anti-Israel activists.

Barnett: “Now a memorial service will be held in London tomorrow for the Palestinian-American journalist Shireen Abu Akleh who was killed while reporting in the occupied West Bank last month. The Al Jazeera journalist was shot in the head while reporting on a raid by Israeli forces in the city of Jenin [mispronounced]. She was wearing a protective vest with the word ‘press’ on it as well as a helmet. On Friday the United Nations High Commissioner for Human Rights said the bullet had been fired by Israeli security forces; something the Israel Defence Force disputes.”

Failing to clarify to listeners that the UN’s claims cannot be considered conclusive because the relevant ballistic analysis was not carried out, Barnett then brought in her colleague Yolande Knell of the BBC’s Jerusalem bureau. The two discussed Knell’s casual familiarity with Abu Akleh and the significance of her being a female journalist in the region. At 51:58 Barnett again brought up the UN statement.

Barnett: “And the circumstances in which she was shot. I mentioned there that the United Nations High Commissioner for Human Rights have made an announcement – a statement – on that and yet that’s not something that the IDF – the Israel Defence Force – agrees with.”

Knell: “That’s right. I mean there’s just huge controversy still over how she was killed. I mean just to put it in context, it was on the 11th of May. Shireen set off early for what must have seemed to her like a routine assignment in Jenin – it’s in the north of the West Bank – and she just emailed colleagues that she was heading to the edge of the camp to check on reports of an Israeli military raid. It was really early; just after dawn. And she sent a message saying ‘I’ll bring you the news as soon as the picture becomes clear’. Ahm…I mean, as you described she was wearing her bullet-proof vest – all very familiar to me – ehm…she was with a group of journalists close to where there were Israeli military vehicles but in a place where the journalists have often gathered because unfortunately there have been a lot of raids in this camp recently.”

Notably, what Knell chose to describe as ‘unfortunate’ are counter-terrorism operations necessitated by attacks given a glaze of false equivalence by Knell in her subsequent portrayal of a “spike in violence”.

Knell: “I mean there has been this spike in violence since late March. Nineteen people have been killed – ahm…mostly Israeli civilians inside Israel and a Jewish settler – in attacks by Palestinians, Arab citizens of Israel. You’ve had a number of the Palestinian attackers who actually come from Jenin or that area and that’s led to an increase in Israeli military raids there. Now in the same time period – because Shireen is not the only person who’s been killed – since March there have been a total of three Israeli Arabs carrying out attacks, 46 Palestinians killed according to one of the news agencies’ counts. And among those killed in the West Bank there were suspected militants but also unarmed civilians, a number of them. So you can see that this was all taking place already within a situation with lots of kind of contention.

I mean of course with lots of journalists around you have witnesses and colleagues of Shireen, including some who were filming, blamed the shooting immediately on Israeli soldiers, saying that was the direction of the fire. They knew what was going on roughly on the ground where the Palestinian militants were. Initially the Israeli military tried to point the finger of blame firmly at the Palestinian militants but then they changed tack and said it was possible she had been killed by a Palestinian gunman shooting indiscriminately or, they said, unintentionally by a soldier.

But what we’ve now had is a number of investigations have concluded that Israeli forces most likely killed Shireen and injured one of her colleagues who was shot as well. That…the latest one that one from the UN High Commissioner of Human Rights on Friday and it said several single seemingly well-aimed bullets were fired at Shireen and three other journalists from the direction of the Israeli forces. And you’ve had media organisations – CNN, the Washington Post, Associated Press, New York Times – have all reached similar conclusions.

Ahm…but the Israeli military says these reports are biased. Ahm…it put out a new statement in response to the UN report, said it was not possible to determine how she was killed. And it’s really blaming the Palestinian Authority for denying Israeli demands. They want it to share the bullet that killed her, that was removed from her body. It said if it had the bullet…Israel say if they had the bullet they could check and answer definitively if it came from one of their soldiers’ guns. But the Palestinians have been refusing that, basically saying they don’t trust the Israeli military to investigate one of its own.”

The IDF statement referred to by Knell is available here. As we see, Knell once again portrayed the issue of the bullet as an ‘Israel says’ issue, failing to explain to BBC audiences in her own words that without professional ballistics analysis, all the ‘investigations’ she cites are speculation. Notably, Knell’s account did not include any criticism of the Palestinian Authority’s decision to thwart the investigation that would reveal which side was responsible for the death of her colleague.

Barnett: “So that’s where that is I suppose up to at the moment. We’re talking about her today, Shireen Abu Akleh and her work, because of the memorial service being held in London tomorrow which, as you say, because of her recognisable…the nature of her being so recognisable and also her length of time in the field but also other journalists having lost their lives, it’s something I suppose that will bring a lot of people together in a way.”

Knell then appeared to belatedly remember to bring up another talking point, giving listeners an entirely partial account of events prior to Abu Akleh’s funeral which excludes attempts to hijack the coffin and the throwing of rocks and bottles by “mourners”.

Knell: “Ehm that’s right. I mean there have been, besides…I mean there was a lot of controversy of course…people might have seen the pictures from Shireen’s funeral procession ehm…because the Israeli police – it was in East Jerusalem – were very heavy handed. They beat the mourners, including the pallbearers so that they almost dropped Shireen’s coffin which was covered by a Palestinian flag. So there’s been a lot of international condemnation of that as well. Ahm…but there were a number of different services remembering Shireen. We spoke to people in one of the refugee camps here. It’s quite remarkable. I went along to one at the church because Shireen was a Palestinian Christian…ahm…and people really see her as being something of a symbol. I mean thousands of people…more people turned out for her funeral in East Jerusalem than people said they’d seen for generations. Just a big outpouring of grief. She’s been described by Palestinians as a martyr for the truth. She’s become this kind of…this, this nationalist symbol, I suppose, but also a symbol of the constant struggle here to find the truth and to report on it.”

Knell and her colleagues are clearly not party to a “struggle…to find the truth and to report on it” in relation to the circumstances of Abu Akleh’s death. Were that the case, they would have been insisting for the past seven weeks that the Palestinian Authority cooperate with a proper professional investigation that would reveal whether or not the bullet that killed their colleague really did come from an Israeli weapon – and vigorously reporting its failure to do so. But Knell and others have shied away from speaking truth to Palestinian Authority power, instead preferring to focus their professional energies on promoting a narrative they cannot be certain is accurate, but which allows their colleague’s tragic death to be hijacked for anti-Israel political purposes.

The Washington Post’s Only Goal Is to Convict Israel