A Guardian article by political editor Heather Stewart (“Starmer allies reject claims leftwingers blocked from standing for Labour”, July 1) focuses on complaints by far-left factions inside Labour that allies of party leader Keir Starmer are acting to block “anyone to the left of Tony Blair” from standing as MP candidate during the next general election. “Potential candidates”, the Guardian writes, “are being invited to due diligence meetings with a panel made up of members of Labour’s national executive committee (NEC)…and subsequently told they will not be [selected for consideration].

Though a Labour spokesperson is later quoted characterising the “due diligence” requirement as simply “weeding out candidates who could cause electoral damage when the election comes”, the tone of the article suggests that the Guardian is sympathetic to complaints by pro-Corbyn groups like Momentum – a group which has peddled antisemitism – that Starmer and his allies are engaged is a “purge of leftwingers” from the party.

We’re then given examples of the ‘unfair’ treament:

Some candidates have been sent a list of historical social media posts flagged as problematic. One such list included liking a tweet by the former Labour policy chief Andrew Fisher, praising an article by the Guardian commentator Owen Jones, which called on Starmer to be bolder. Another included support for Palestinian rights, and for the Occupy movement.

Though the Guardian doesn’t name the candidate whose social media activity was flagged merely becuase it “included support for Palestinain rights”, we’re almost certain that the candidate in question is former Peterborough MP Lisa Forbes.  If so, the Guardian’s characterisation of the posts are grossly inaccurate.  As a BBC report published yesterday – based largely on research by  Labour Against Antisemitism – documenetd, the row over Forbes’ social media interactions was due to their antisemitic nature, not due to their pro-Palestinian views:

[Lisa Forbes] suggested the reason [she wasn’t selected] was not made explicit, but evidence of her social media activity was shared with her as part of background checks by the selection team, and discussed with her in a meeting.

Compiled in a document seen by the BBC, the evidence included screenshots of posts shared by Mr Corbyn and liked by Ms Forbes.

During the by-election campaign in 2019, controversy engulfed Ms Forbes after she interacted with posts condemned as anti-Semitic by Jewish Labour groups.

Ms Forbes said the video was about showing solidarity with victims of the Christchurch terror attack in 2019 and she clicked the like button without reading the accompanying text.

She also commented under a post whose author claimed that Islamic extremists were the creation of the CIA and Mossad, the Israeli intelligence agency, writing: “I have enjoyed reading this thread so much.”

Ms Forbes apologised and accepted the content she “mistakenly engaged with” was “deeply offensive and contained anti-Semitic language and tropes which harm the Jewish community”.

Labour Against Antisemitism called her by-election win a “dark day” for the party.

Here’s a snapshot (per a previous CAMERA UK post) of the Facebook post that Forbes ‘liked’, claiming that “Theresa May had a Zionist slave masters agenda”: 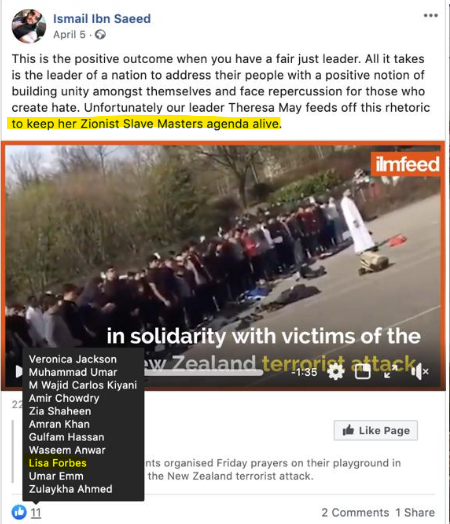 Here’s a snapshot of the other post, commented on by Forbes, by the same Facebook user in which he claims that the CIA and the Mossad created ISIS: 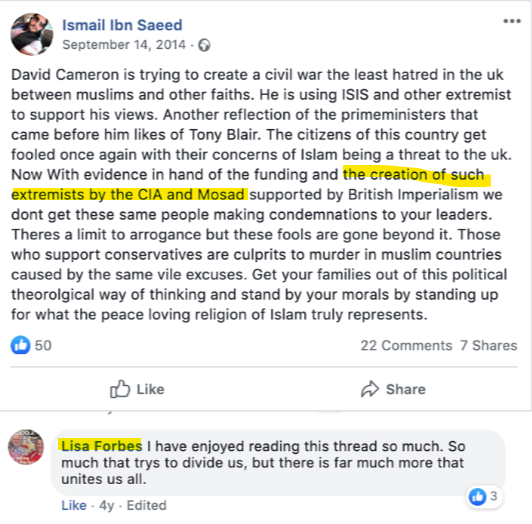 In what possible sense are the social media posts she interacted with and liked an expression of her “support for Palestinian rights”?

Moreover, the omission of the hateful content is especially misleading to readers in that it obfuscates important context relating to efforts by Labour ‘due dilligence’ panels: that they likely represent an effort to cleans the party of antisemitism in the aftermath the 2020  investigation by the Equality and Human Rights Commission which found the Labour Party under Jeremy Corbyn had committed unlawful acts of discrimination against Jews.

Further, unlike the Guardian’s piece, BBC’s reporting on the row included this clarifying statement by a Labour spokesperson on the due dilligence panels:

“The Labour leader is determined to stick to his promise to pull anti-Semitism up by its roots and the public have a right to know that everyone the Labour Party puts forward at election time is of a high standard.”

We contacted the journalist,  noting the evidence of Forbes’ antisemtic (not ‘pro-Palestinian’) social media interactions, and offered her a reply.  At the time this post was published, she hadn’t yet responded.

Izabella Tabarovsky on parallels between Soviet and modern left antisemitism