When the Ben & Jerry’s saga began almost a year ago, we documented the messaging promoted by the BBC across various platforms:

BBC CONTINUES TO AVOID THE WHOLE STORY IN BDS REPORTS

In one report for Radio 4, Jonathan Josephs of BBC Business told listeners that: [emphasis added]

“The ice cream maker, known for its unconventionally named flavours, said it would be inconsistent with its values to continue selling its products in the West Bank and East Jerusalem. That’s been welcomed by Palestinian activists who believe boycotts are an effective way to get Israel to change policy towards the territories.” 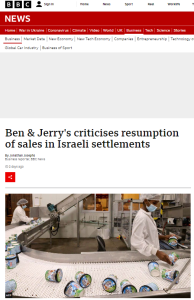 “Palestinian activists behind the Boycott Divestment and Sanctions (BDS) movement praised Ben & Jerry’s at the time for what they said was “a decisive step towards ending the company’s complicity in Israel’s occupation and violations of Palestinian rights”. The movement tries to use economic pressure to force Israel to change its policies.” [emphasis added]

That link leads to a Tweet posted on July 19th 2021. The same Tweet was featured in a BBC News website report published the following day and as was noted here at the time:

“That link leads BBC audiences to the Twitter account of “the Palestinian BDS National Committee (BNC)” which describes itself as “the Palestinian leadership of the global Boycott, Divestment & Sanctions (BDS) movement” despite having been founded two years after the BDS campaign emerged.

The BNC is headed by Omar Barghouti who has on multiple occasions made the BDS campaign’s end game perfectly clear.

In this 2019 video Barghouti states “most definitely we oppose a Jewish state in any part of Palestine”.

The claim from Jonathan Josephs that those who support boycotts do so because they believe they are “an effective way to get Israel to change policy towards the territories” clearly misleads BBC audiences with regard to the real agenda of the BDS campaign and whitewashes its antisemitic nature.”

As we see, that point has apparently not been adequately understood at BBC Business and so audiences continue to be misled with the same inaccurate information.

As is inevitably the case in BBC reporting, background portrayals of history begin in 1967 without any mention of the illegal Jordanian occupation of Judea & Samaria and parts of Jerusalem or the status of that area before the Jordanian invasion. As ever, the BBC compromises its own impartiality with partial presentation of ‘international law’.

“More than 600,000 Jews live in about 140 settlements built since Israel’s occupation of the West Bank and East Jerusalem in the 1967 Middle East war. Most of the international community considers the settlements illegal under international law, though Israel disputes this.”

Towards the end of his report Josephs provides a platform for commentary from a known anti-Israel activist:

“Omar Shakir of US-based campaign group Human Rights Watch said Unilever was seeking to undermine the “principled decision” of Ben & Jerry’s board, but insisted it would not succeed.

“Ben & Jerry’s won’t be doing business in illegal settlements. What comes next may look and taste similar, but, without Ben & Jerry’s recognized social justice values, it’s just a pint of ice cream,” he added.”

Readers may recall that back in 2019, when Israel did not renew Shakir’s work visa, the BBC willingly provided platforms for Omar Shakir and his boss to promote the falsehood that neither he nor their organisation support the BDS campaign. For example:

Iqbal: “Israel’s view is that Mr Shakir is advocating the policies of the BDS movement – the boycott, divestment and sanctions movement – which is contrary to an Israeli law of 2017. Are you saying that he is not doing that?”

Roth: “That’s correct. I mean the Israeli pretext is the BDS law but in fact, you know, Human Rights Watch has never endorsed BDS. We have not called for a boycott. We don’t appeal to consumers. This was just kind of a concocted pretext to get rid of Omar Shakir.”  […]

Iqbal: “And just one final comment on…on what you are being accused of doing by the Israelis – that you have been engaged in advocating boycotting and divestment and sanctions against Israel.”

Notably, in its reporting of the latest developments in the Ben & Jerry’s story, the BBC found it appropriate to feature commentary intended to provide ‘balance’ by ticking the pro-BDS box from a person who less that three years ago it had been happy to present as supposedly not supporting BDS.