Last month we noted on these pages that BBC audiences had heard nothing about threats from Lebanon and Hizballah after a floating gas production rig arrived on site at the Karish field earlier in June and that the last time they saw coverage of the maritime borders dispute between Lebanon and Israel was in October 2020.

That meant that on the evening of July 2nd, the BBC had some catching up to do in reports it put out concerning an incident earlier in the day involving Hizballah drones headed for that gas field.

At around 22:40 local time the BBC News website published a short report by Matt Murphy on its ‘Middle East’ page which is now headlined ‘Israel shoots down Hezbollah drones heading for gas rig’. However, as can be seen in the Tweet promoting that report, the BBC was apparently not originally convinced that those drones belonged to the Lebanese terrorist organisation, despite – as reported by Israeli media outlets – Hizballah having claimed them some half an hour earlier. 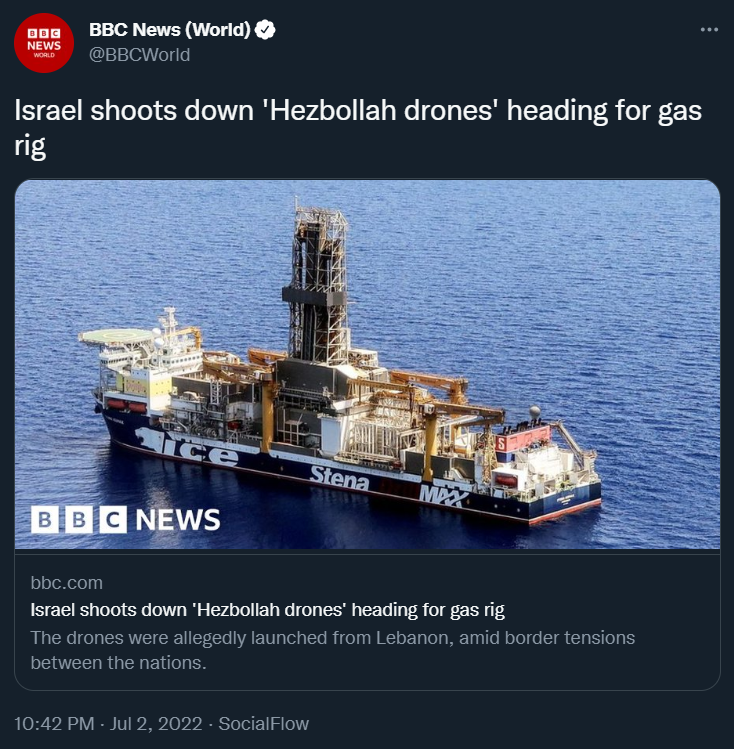 Roughly an hour after its original appearance, that headline was amended to remove the superfluous qualifying punctuation and the report was updated to inform readers that “Hezbollah confirmed it had launched the drones in a short statement”.

The maritime borders dispute that BBC audiences have not heard about for twenty months is addressed in just two paragraphs: 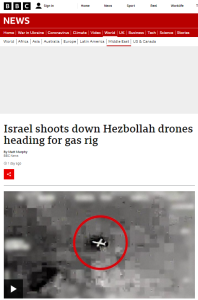 “Tensions have mounted between Israel and Lebanon over ownership of the Karish gas field.

US energy envoy Amos Hochstein is mediating between the two countries to settle the longstanding dispute. Israel says the field lies within its UN-recognised exclusive economic zone, but Lebanon has also laid claim to parts of it.”

The BBC’s portrayal of related threats excludes those made by Lebanon officials and downplays the recurrent nature of Hizballah’s threats.

“Last week, the group’s leader, Hassan Nasrallah, threatened to use force to prevent Israel from operating the rig.”

The report does however present two paragraphs of questionable linkage between what is bizarrely framed as a “reported attack” – despite Hizballah having taken responsibility – and internal Israeli politics.

The vote, which comes after the collapse of former Prime Minster Naftali Bennett’s multi-party coalition, offers Benjamin Netanyahu, the right-wing opposition leader, a chance to return to power.” [emphasis added]

Equally dubious framing – along with the same failure to accurately describe Hizballah as a terrorist organisation – was found in the evening edition of the BBC World Service radio programme ‘Newshour’ on July 2nd. Presenter Lyse Doucet introduced the item (from 30:02 here) as follows:

Doucet: “It’s a night of rising tensions between Israel and Lebanon’s Hizballah movement. Tensions simmering for months sharply escalated after Hizballah launched three unarmed reconnaissance drones towards a disputed area with Israel, including the Karish [mispronounced] gas field in the Mediterranean. A statement from Hizballah said the mission was successful and delivered a message. Israel said it intercepted the three drones.”

Doucet then brought in her interviewee – Israeli journalist Noga Tarnopolsky – asking her “what do you think the message was from Hizballah?”.

Tarnopolsky suggested three ‘messages’: “a sort of welcoming message for the new (Israeli) prime minister”, “sort of a warning shot sent ahead of President Biden’s trip” and “principally, part of the ongoing shadow war between Israel and Iran that has been intensifying in recent months.”

Doucet: “What would Hizballah in particular want to say to the United States at a time when, as you say, it is fighting this shadow war with Israel which, as we’ve seen so many times in the past, can get…be more than…be more than just a shadow?”

Tarnopolsky: “There have been calls in Washington for Hizballah not to participate in the Lebanese government and for…you know, Hizballah is recognized as a terror organisation by the United States but at the same time is the most powerful political party in Lebanon. So this can definitely be seen as a kind of statement of ‘we’re here and we’re in charge’. Because obviously it wasn’t Lebanese army – the national army – drones. This was Hizballah drones, so Iranian made drones operated by this militia.”

Doucet again brought up the topic of Israeli politics.

Doucet: “And do you think Hizballah senses a moment of political weakness as Israel heads to yet another election in a few months’ time?”

As for the maritime border dispute itself, listeners were given a superficial and uninformative account of that topic:

Tarnopolsky: “This is actually an Israeli…ehm…gas production field. It’s a floating gas extractor. Lebanon claims… Israel claims it is in territorial waters and Lebanon claims that’s in disputed territory and that’s what the United States is mediating. But it’s a functional Israeli gas field so it was definitely a warning shot to, you know, what can be considered important Israeli infrastructure.” [emphasis in bold added]

In fact the Karish field is expected to be functional only later this year.

Doucet spent the last minute and a quarter of this interview talking about a completely unrelated topic.

Notably, none of the BBC’s reporting on this story informs audiences of the possible effects of Hizballah’s decision to launch those drones on the negotiations concerning the maritime border or how it is linked to domestic Lebanese politics. The BBC’s written report was not updated to provide information about criticism of Hizballah’s actions from Lebanese leaders.