The statement issued on July 4th by the US State Department regarding the inconclusive results of analysis of a bullet said by the Palestinian Authority to have killed the Al Jazeera journalist Shireen Abu Akleh on May 11th was the topic of several BBC reports on that day and the next.

Listeners to BBC Radio 4’s ‘PM’ programme on July 4th heard a report from the BBC Jerusalem bureau’s Yolande Knell (from 16:45 here) which included the following: [emphasis in italics in the original, emphasis in bold added]

Evan Davis: “And they [the US] think it’s probably an Israeli bullet but they say no reason to assume that it would have been deliberately fired. So that’ll be where the argument is now, I suppose.”

Knell: “Well that’s right, yeah. So the Israeli military have been clear from the beginning that there was…ahm…no intention to target journalists; that’s not something that Israeli soldiers would do, they say. Whereas the Palestinian official investigation went as far as to say that this was deliberate fire from the Israelis. […] For the Palestinians, the press have come out saying, you know, that as expected, the US investigation is trying to protect Israel. One senior Palestinian official saying that Israel should take responsibility for assassinating Shireen Abu Akleh – his words – and that the Palestinians are going to continue to pursue this case through the international courts.”

Listeners to two editions of the BBC World Service radio programme ‘OS’ on the same day heard a news bulletin (from 24:37 here) and another report from Yolande Knell (from 18:36 here).

Knell: “There have been a number of investigations by the media and one from the UN concluding that Israeli forces most likely killed Shireen Abu Akleh and injured one of her colleagues as well.”

Knell: “We already knew from pictures that have been seen that the bullet was quite distorted…ahm…by Shireen Abu Akleh’s helmet, it seems. And just to make it clear to people, the reason why it was difficult to say whether the bullet was from an Israeli or a Palestinian gun is because both sides were using the same sort of weapons and the same bullets within them.”

Knell’s reply to a question from presenter James Reynolds about the Abu Akleh family’s response to the US statement included quotes from their statement such as “an attempt by the Israeli side to spin the narrative in its favour”. Knell told listeners that the family “go on to repeat a claim which is often made by…ehm…both sides [sic] that the Israeli military targets…err…Palestinians.”

The evening edition of the BBC World Service radio programme ‘Newshour’ – presented by Jon Donnison – also included a report from Knell (from 30:05 here).

Donnison: “Israel initially said her death was caused by Palestinian fire, despite eye-witness accounts from Shireen’s colleagues saying she was shot by Israeli soldiers. Since then numerous investigations, including from the UN Human Rights office, the New York Times, Associated Press, CNN and the Israeli human rights group B’tselem have all concluded the Israeli military was likely responsible.”

Donnison: “The Israeli government and the Israeli military there, not yet prepared to accept…ah…that its soldiers might have been responsible.”

Knell: “Palestinians really remain sort of outraged about what happened to her. It’s a long-running complaint of Palestinians and human rights workers that Israel’s military justice system kind of creates an atmosphere of impunity for soldiers suspected of violence against Palestinians. That of course is something that the Israeli military strongly rejects.”

That item concluded with an interview (over three minutes long) with Shireen Abu Akleh’s brother who was not challenged by Donnison even when he asserted that the US State Department statement “looks more like […] probably I would say an Israeli drafted it” or on any of his other claims or allegations.

On the afternoon of July 4th the BBC News website published a report by Raffi Berg on its ‘Middle East’ page titled ‘Shireen Abu Aqla: US releases result of test on bullet that killed reporter’. 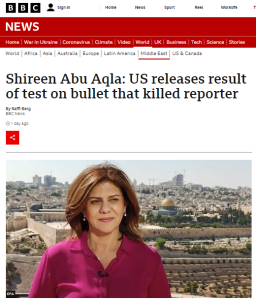 As was the case in two previous reports by Raffi Berg, readers find superfluous qualifying punctuation in relation to the mission of the IDF forces operating in Jenin on May 11th:

“The IDF said its troops had gone into Jenin to apprehend “terrorist suspects” following a wave of deadly attacks against Israelis by Palestinians, two of whom came from the Jenin district.” 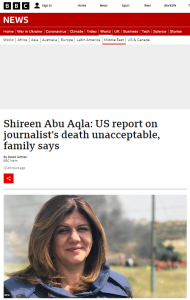 That report mainly recycles (and links to) the ‘Newshour’ interview with Abu Akleh’s brother from the previous evening and in addition, again promotes statements made by the secretary general of the PLO’s executive committee, Hussain al-Sheikh.

“Shireen Abu Aqla’s brother has heavily criticised a US report that concluded unintentional Israeli gunfire was likely to have been responsible for the Palestinian-American reporter’s death.

Tony Abu Aqla told the BBC the findings were “unacceptable” and insisted his sister was targeted by Israeli troops. […]

A top official in the Palestinian Authority, which has concluded that Abu Aqla was intentionally shot dead by an Israeli soldier, accused the US of trying to protect Israel.”

Both those written reports are tagged, inter alia, “Press freedom”. Perusal of that BBC News website tag shows that of the 23 items added since the beginning of the year, nine (dating from May 12th onwards) relate to Shireen Abu Akleh. Two items relate to the deaths of journalists in Mexico while, notably, no reports on the deaths of several journalists in Ukraine since the Russian invasion in February appear under that tag. 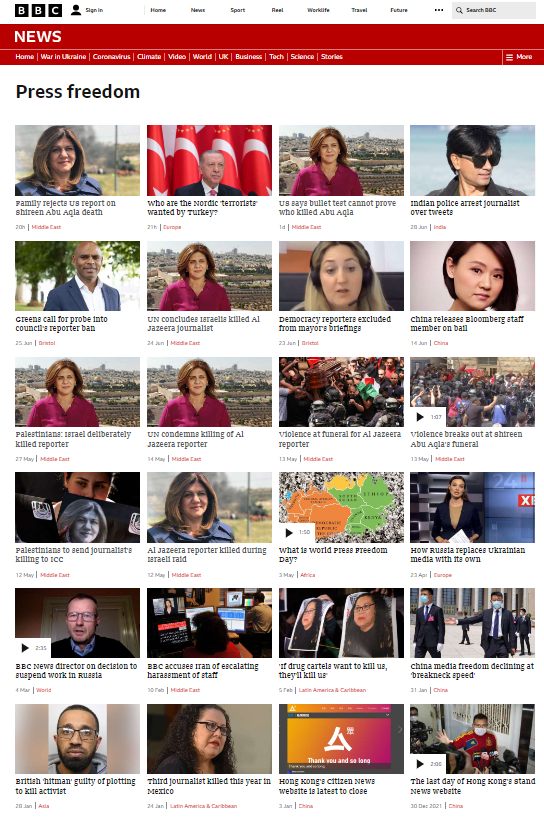 As we see, the BBC elected to give cross-platform amplification to the rejection of the US statement by Palestinian officials and the Abu Akleh family. At the same time it uncritically promoted the conclusions of other ‘investigations’ which advance a specific yet unproven narrative, together with related politically motivated talking points such as ‘assassination’, ‘targeting Palestinians’ and ‘impunity’.

The Washington Post’s Only Goal Is to Convict Israel