Under the sub-heading ‘Campaigns and Initiatives’, BBC editorial guidelines on impartiality include the following:

“4.3.17 The BBC must remain independent and distanced from government initiatives, campaigners, charities and their agendas, no matter how apparently worthy the cause or how much their message appears to be accepted or uncontroversial.

4.3.18 Careful thought will be necessary to ensure perceptions of the BBC’s impartiality are maintained when content is scheduled topically and coincides with a third party’s campaign or initiative. It is advisable to contact Editorial Policy.”

One can therefore only wonder how the producers of the BBC World Service radio programme ‘Weekend’ explain the fact that on July 3rd they devoted over eleven minutes of airtime to entirely one-sided promotion of a political campaign currently being run by Oxfam and other NGOs.

“And we look at what the impact of the blockade of Gaza is having specially on young people.

Joining Julian Worricker to discuss these and other issues are Tony Connell, RTE Europe Editor and author; and Kate Clark, co-Director of the Afghanistan Analysts Network.”

The introduction given by presenter Julian Worricker (from 30:23 here) began with promotion of political talking points all too frequently seen in BBC content: [emphasis in italics in the original, emphasis in bold added]

Worricker: “We begin in the Middle East. Gaza: one of the world’s most densely populated areas with more than five thousand inhabitants per square kilometer. And it’s been described by many Palestinians and aid agencies as the world’s largest open-air prison.”

Worricker: “About 80% of the population depends on international aid according to the United Nations and about one million people rely on daily food aid. At the heart of Gaza’s economic woes is a blockade by neighbouring Israel and by Egypt, restricting the movement of people and goods, which was tightened after the Hamas takeover – an organisation designated a terrorist group by Israel, the US, EU and UK. Israel says the blockade is necessary to stop attacks by the militant group.”

Unsurprisingly, Worricker’s portrayal provided no information about the rise in terror attacks in the months following the Hamas coup which prompted the Israeli government to declare the Gaza Strip hostile territory in September 2007.

Listeners then heard the reason for the timing of this item:

Worricker: “Well to mark the fifteenth anniversary of the blockade, the UN and aid agencies, including Oxfam, have been trying to highlight the impact of that blockade, especially on young people. We brought together Hind Wihaidi – born and brought up in Gaza – and Shane Stevenson, country director for Oxfam.”

Anyone who has seen Oxfam’s accompanying Twitter campaign may have had reasonable doubt about the need for the BBC to have “brought together” one of the people heading Oxfam’s PR stunt and one of the young people selected by the NGO to be the face of its campaign. 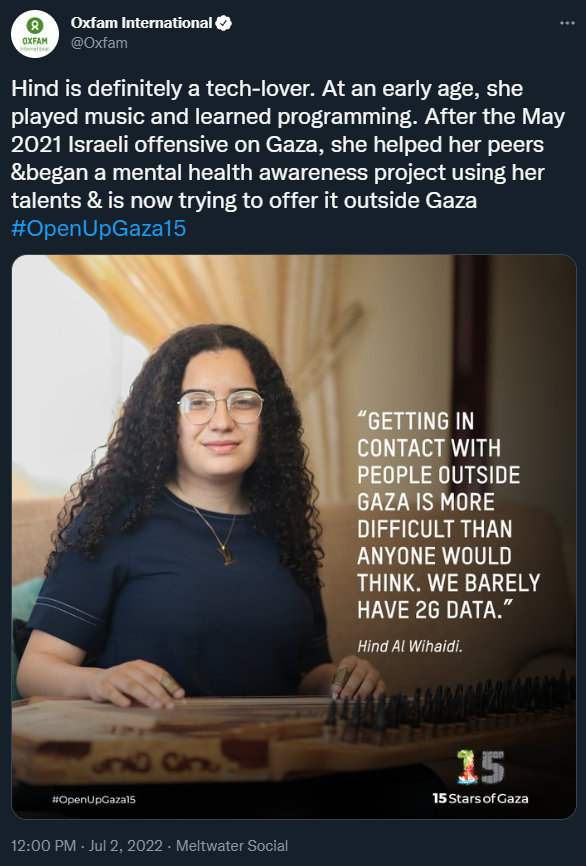 Listeners heard 17-year-old Hind Wihaidi talking about how “it’s going to be hard for me to just get out easily” to study abroad “due to that 15-year blockade” before Worricker brought in the Oxfam representative Shane Stevenson. Audiences were told that 41% of Gaza’s population is under the age of 15 “and they’ve only known this blockade – this siege – on their lives”.

Despite BBC World Service radio having corrected the inaccurate claim that the Gaza Strip is under ‘siege’ in 2019, Worricker failed to challenge Stevenson on that point.

Stevenson went on to explain Oxfam’s decision to “have a campaign where we can bring these stories, real life stories of people like Hind, so that people remember that there are people that suffer because of this blockade and that their hopes and their dreams and their aspirations to grow and fulfil their potential are severely hampered”.

Worricker later acknowledged the political nature of the item:

Worricker: “Shane, we’ve not invited either of you on here to talk about politics [Stevenson laughs] but inevitably it is about politics and I wonder how much an organisation like Oxfam can influence the decision makers and it’s not just Oxfam; there are other organisations involved in this campaign as well. How much influence realistically can you carry to say to all sides in this ‘you need to take another look’?”

Listeners were not informed that other political NGOs involved in the campaign include ‘Al Mezan’, ‘Medical Aid for Palestinians’, ‘Gisha’ and ‘Save the Children’. Unsurprisingly, the record of anti-Israel activity of those NGOs – and that of Oxfam itself – was not clarified to the BBC’s listeners worldwide.

Citing a report by ‘Save the Children’, Stevenson asserted that depression among children in the Gaza Strip has risen to 80%. Notably absent from his portrayals was any mention of the Israeli children who have grown up under constant threat of terror attacks and rocket fire for the past twenty-one years and the effects on their mental health and fulfilment.

Worricker subsequently brought in his guests to comment. Kate Clark promoted the inaccurate notion of a “non-violent first Intifada” while Tony Connell absurdly asserted that Gaza “is one of those forgotten conflicts”. Claiming to have “covered the Israeli-Gaza war in 2009 for several weeks” (it lasted 23 days), Connell then dusted off a favourite old media canard, referring to “the bombing campaign by Israel and the obviously disproportionate number of Gazans who had been killed compared to the numbers on the Israeli side”. He went on to claim that the current conflict in Ukraine “kind of reminds people of that disproportionate effect, the ratio of deaths”.

Notably, while listeners to this item were presented with over eleven minutes of entirely one-sided sympathetic commentary from two contributors, two guests and a presenter, at no point did they hear an Israeli point of view.

Despite the abovementioned editorial guidelines, it is clear that the BBC did not “remain independent and distanced” from this Oxfam campaign at all: in fact it self-conscripted to its promotion, with obviously insufficient consideration given to the effect on “perceptions of the BBC’s impartiality” of the airing of worldwide amplification of “a third party’s” overtly political ongoing campaign.