Several reports about Israeli counter-terrorism operations in the Jenin area have been published on the BBC News website in the past year:

BBC NEWS WEBSITE REPORTING ON AN INCIDENT IN JENIN

OMISSIONS IN BBC REPORT ON INCIDENT IN JENIN

A common feature in all those reports (in addition to the BBC’s serial avoidance of the use of the word terror) is their failure to inform audiences on the topic of the formation of the ‘Jenin Battalion’ Joint Operations Room as reported last September.

Additionally – although unsurprisingly given the BBC’s chronic underreporting of internal Palestinian affairs – audiences have seen no serious coverage of the related topic of the Palestinian Authority’s loss of control over that part of Area A, where it is responsible for both civil affairs and security.

On July 12th the BBC News website published a seven-minute filmed report by Tom Bateman titled ‘Jenin in the West Bank: Guns and grief on the rise’ which could have addressed those long-standing omissions but failed to adequately do so.

At 04:15 Bateman tells viewers that the Jenin refugee camp “is now a place where the official Western-backed Palestinian security forces are not welcome, and it is the gunmen here who are in charge”.

Presumably having secured the appropriate permission to “approach individuals or organisations responsible for acts of terror” but without informing viewers who arranged such a meeting, Bateman visits a terrorist’s house and viewers discover that the BBC is in fact well aware of the existence of the ‘Jenin Battalion’.

Bateman: “We were taken to a home of the so-called Jenin Brigade. It’s a single banner the Palestinian armed groups have been using for a year or so. They’re all listed by Israel and the West as terrorist organisations. But in the camp, their recruits are growing.”

Audiences are not told the names of those terrorist organisations. Bateman interviews a masked terrorist with a rifle who is presented as “Abu Watan” and asks:

Bateman: “The West sees groups in the camp as terrorist organisations. So why are you doing this? Why don’t you leave it to the official Palestinian Authority?”

The terrorist claims that the PA “sold us out from the beginning”, adding “We don’t see them as our brothers. When they [allow the Israeli army] to raid Nablus and Ramallah they don’t protect us. They want to wipe out the resistance.”

That one-minute section of the film is its sole portrayal of the key topics of the Palestinian Authority’s loss of control over the area and the rise of terrorist groups under the ‘Jenin Battalion’ banner. Remarkably, the BBC appears to be quite content to have those issues explained to audiences solely by a member of a terrorist organisation. 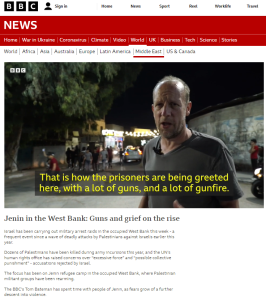 In the other six minutes of the film viewers see footage of a family whose daughter was killed in April during a firefight in Jenin, of young boys in a cemetery wishing they could “follow” terrorists and of Bateman – notably without the flak jacket and helmet so often worn by BBC reporters in the region – attending a rally of armed men (apparently from Fatah’s Al Aqsa Martyrs’ Brigade if the flags are anything to go by) indiscriminately shooting into the air to welcome newly released “prisoners”.  Although such rallies are by no means unusual or new, Bateman tells viewers that “it really feels like […] things are ramping up because of the situation at the moment”.

In addition, Bateman interviews men who complain that there is no work in the area before going on to state:

Bateman: “In May, during another raid, the veteran Palestinian journalist Shireen Abu Akleh was killed. Evidence suggests an Israeli soldier fired the fatal bullet. The army disputes that conclusion, saying it’s still investigating.”

Viewers are told by Bateman that “An Israeli officer was shot dead in Jenin later in May”. That incident – which actually occurred two days after Abu Akleh was shot – was not reported at the time by the BBC.

The take-away messaging of Bateman’s report is revealed early on in the film: 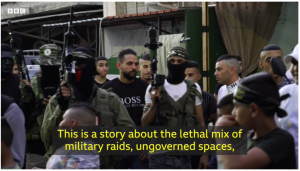 Bateman: “This is a story about the lethal mix of military raids, ungoverned spaces and the civilians paying the price.”

“Israel has been carrying out military arrest raids in the occupied West Bank this week – a frequent event since a wave of deadly attacks by Palestinians against Israelis earlier this year.

Dozens of Palestinians have been killed during army incursions this year, and the UN’s human rights office has raised concerns over “excessive force” and “possible collective punishment” – accusations rejected by Israel.

The focus has been on Jenin refugee camp in the occupied West Bank, where Palestinian militant groups have been rearming.”

Those military raids are of course a response to lethal attacks against Israeli civilians perpetrated by terrorists from a region in which the lack of effective Palestinian Authority governance has allowed terrorist groups to flourish.

Nevertheless, the BBC’s portrayal of this story promotes a ‘chicken and egg’ narrative rather than providing audiences with in depth reporting which would enhance their understanding of the “ungoverned spaces” factor that the BBC obviously recognises as relevant but refrains from addressing seriously.