Previously we saw how, in a July 14th TV report about the US president’s visit to the Middle East, the BBC’s Jeremy Bowen highlighted banners put up by the political NGO ‘B’tselem’ and chose to amplify politically motivated ‘apartheid’ smears.

That, however, was not the only example of BBC journalists casually mainstreaming the ‘apartheid’ canard in reports on that presidential visit.

In a news bulletin aired earlier on the same day on BBC Radio 4’s ‘Today’ programme (from 2:04:50 here), the BBC Jerusalem bureau’s Tom Bateman chose to highlight one sole topic raised in a thirteen-minute interview:

Bateman: “In an interview for Israeli TV Mr Biden was asked about voices in the Democratic party who describe Israel as an apartheid state. He called those voices few and wrong.”

One of the editions of the BBC World Service radio programme ‘Newsday’ aired on July 15th included an interview (from 49:29 here) with Issa Amro who was presented as a “Palestinian activist based in the West Bank city of Hebron”. Unchallenged by presenter James Copnall, Amro told listeners worldwide:

Amro: “So two sets of law in the area for different people, it’s apartheid.”

Amro: “…and we want him [Biden] to talk and describe that it’s apartheid and it’s occupation.”

The same day’s edition of BBC Radio 4’s ‘Today’ programme included a report from the BBC Jerusalem bureau’s Yolande Knell (from 37:36 here) in which she also amplified the latest chapter in a B’tselem campaign.

Knell: “and an Israeli anti-occupation NGO has paid for signs all along the route to the presidential headquarters saying ‘this is apartheid, Mr President’.”

“Signs put up by an Israeli anti-occupation NGO, B’Tselem, read: “This is apartheid, Mr President” – a label that Israeli and US authorities strongly reject.”

The July 15th afternoon edition of the BBC World Service radio programme ‘Newshour’ had the US president’s visit as its lead item (from 00:10 here) and devoted over twelve minutes to that topic. 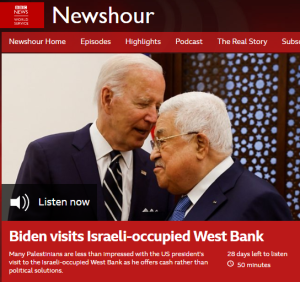 Introducing Yolande Knell at 05:37, presenter Audrey Brown claimed that the same signs had been placed by Palestinians rather than by a political NGO:

Brown: “So Yolande, there’s been a lot of opposition to the visit with Palestinians hanging out banners saying they live under apartheid…”

At 08:26 Brown introduced her sole non-BBC interviewee, Mariam Barghouti, who was presented to listeners as a “Palestinian writer and researcher”.

After asking Barghouti about the “similarity between Palestinian protest against oppression and the Black Lives Matter movement in the US”, Brown noted that it has been sixteen years since the last Palestinian election, to which her interviewee replied:

Barghouti: “…and do you expect us to be able to do anything when there is an apartheid system functioning? When we’re focusing on not being dispossessed?”

The BBC is of course well aware that the ‘apartheid’ smear is deliberately employed by anti-Israel pressure groups and their supporters (such as Mariam Barghouti) with the aim of delegitimising Israel and turning it into a pariah state. Despite knowing just how incendiary the trigger terminology of ‘apartheid’ is, the BBC has nevertheless facilitated its amplification and mainstreaming for years, be it by BBC journalists themselves, by selected interviewees or by political NGOs.

As we see above, in just two days of BBC coverage of Joe Biden’s visit to the region, such banal amplification was evident on multiple BBC platforms, indicating that BBC editors continue to be entirely unperturbed by the fact that they are facilitating the mainstreaming of a politically motivated lie that deliberately hinders audience understanding of the Palestinian-Israeli conflict.