An analysis by the Indy’s senior US correspondent Richard Hall begins by recounting a speech made in the 1980s by then Senator Joe Biden denouncing “the immorality of South Africa’s apartheid regime and his country’s support of it”.

Hall, in his July 14th piece, titled “Joe Biden was a fierce critic of South African apartheid – now he’s accused of ignoring similar policies in Israel”, then writes that “some 35 years later, those very same questions are being asked of Mr Biden as he visits Israel and Palestine for the first time since becoming president of the United States”.

Who’s accusing Biden of double standards in not calling out Israel as an “apartheid state”?  Hall writes:

During an interview with Israeli television on Wednesday, the president was asked what he thought about “voices in the Democratic Party” who called Israel an apartheid state.

Hall doesn’t note that very, very few Democratic voices in Congress have leveled this charge, and the ones who have are from the (Corbyn-style) radical fringe wing of the party: Congresswomen Ilhan Omar, Rashida Tlaib, Alexandria Ocasio-Cortez and Betty McCollum.

Then, in his own voice, Hall comments:

It was a softball question, framed as an internal political disagreement rather than a practical reality.

So, in his analysis we learn that Hall himself is among the “critics” who believe Israel is an apartheid state, along with, he tells us, “human rights organisations”

That consensus [among leading human rights groups] it is that Israel is now practising the very same crimes that Mr Biden once forcefully condemned as a senator.

He cites recent reports by B’tselem, Human Rights Watch and Amnesty International, and, as is typical with journalists commenting on the region, fails to critically scrutinise what CAMERA research demonstrated, were irredeemably flawed reports that were clearly motivated by the well-documented political agendas of the NGOs.

As CAMERA, NGO Monitor and others have shown, all the three NGOs peddling the smear have one common thread: their allegation is premised to some degree on the antisemitic idea that a Jewish state within any borders is an intrinsically racist endeavor.

So @J_Insider publishes full transcript and audio of @amnestyusa’s @dpaulobrien speech … which only underscore how racist, hypocritical and antisemitic he was, including in the rejection of #Israel’s right to exist as a Jewish state. @amnesty https://t.co/65T916pzaU

B’Tselem went even further, casting the existence of a Jewish state open for Jewish immigration as evidence of “Jewish supremacy”, an antisemitic term popularised by former KKK leader David Duke. 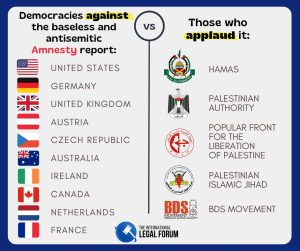 Though Hall notes Israel’s rejection of the charge, he omits that it was also categorically rejected by leading democracies, such as the US, UK, Germany, France, Austria, Czech Republic, Australia, Ireland, Canada and The Netherlands. In fact, we’re unaware of any democratic country that issued official statements in support of Amnesty’s allegation.

First, in addition to the inconvenient fact that over 20% of Israel’s population are Arab, who enjoy all the political rights that Jews enjoy, it’s absurd to present Israeli Jews – who hail from North and South America, Africa, Europe, the Middle East, and Asia – as a single monochromatic race.  As Justin Danilewitz observed: “The diverse melting pot of modern Israel belies Amnesty’s caricatured depiction of Jews as a homogeneous group of [white] European colonizers”.

Moreover, any such reduction of the Israeli-Palestinian conflict as one predicated upon race is farcical.

For starters, it ignores the fact that Israeli control of the West Bank is rooted in the state’s defensive actions in response to the 1967 Arab war of annihilation, not some sinister Jewish desire for “racial domination”.

It of course also omits Israeli efforts to relinquish their control of the disputed territories: mulitiple Israeli peace offers, rejected by Palestinian leaders, that would have granted Palestinians, for the first time in history, their own state, as well as Israel’s complete withdrawal from Gaza in 2005 and the subsequent rise to power in the territory of Hamas – an antisemitic extremist group that seeks the Jewish state’s destruction.  The “apartheid” smear, like so much of what passes for informed comment about Israel, elides such inconvenient facts, thus erasing Palestinian agency.

The Israeli-Palestinian conflict is a territorial dispute, one born of, and continually fueled by, Palestinian terror, antisemitism and rejectionism, not, as those like the Indy journalist like to project from the American experience, a race-based civil rights struggle.  Even if you fault Israel for making decisions that are inimical to a two state solution, to impute to Israeli Jews the desire for “racial domination”, which is the basis of the “apartheid” smear, is illogical, counter-factual and ahistorical.

(Here’s a good analysis of the Soviet origins of the “apartheid” charge, and other antisemitic smears, against Israel)