The BBC’s guidance on the use of social media opens by clarifying that: [emphasis added]

“All BBC activity on social media, whether it is ‘official’ BBC use or the personal use by BBC staff is subject to the Editorial Guidelines and editorial oversight in the same way that our on platform content is.

We should take particular care about maintaining our impartiality on social media, both in our professional and personal activities.”

It goes on to state:

“Where individuals identify themselves as being linked with the BBC, or are programme makers, editorial staff, reporters or presenters primarily associated with the BBC, their activities on social media have the potential to compromise the BBC’s impartiality and to damage its reputation.”

“Expressions of opinion on social media can take many forms – from straightforward tweets or updates, sharing or liking content, following particular accounts or using campaigning or political hashtags.

If for example a member of staff repeatedly likes or shares, without comment, content reflecting a particular point of view on a matter of public controversy it might create the impression that individual agrees with that view.”

One BBC journalist who appears to have little regard for that guidance (see ‘related articles’ below) is the former BBC Jerusalem bureau reporter Wyre Davies who recently found fit to award ‘likes’ to two Tweets which can most definitely be categorised as “reflecting a particular point of view” that were put out by the political NGO B’Tselem and one of its employees. 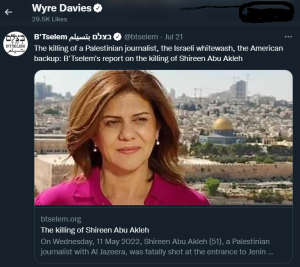 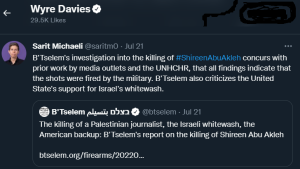 That falsehood has also been amplified and promoted in the exceptional (both in amount and duration) media coverage of the death of Shireen Abu Akleh, including by the BBC.

The same libel has been employed by political NGOs such as B’Tselem which have a record of campaigns aimed to delegitimise Israel.

Writing at the Mosaic magazine, Michael Oren observes that:

“The belief that Israel has a policy of assassinating reporters has, explicitly or tacitly, been accepted by much of the liberal world. How else to explain a recent Washington Post report that likened Abu Akleh’s death to that of Jamal Kashoggi, the Saudi journalist murdered and dismembered in the Saudi embassy in Istanbul? On what other grounds would the Atlantic, a liberal bellwether, have published an article by a Palestinian-American journalist comparing Israel to the Pakistani Islamists who kidnapped the Wall Street Journal correspondent Daniel Pearl in 2002? Pearl, the article fails to mention, was tortured, beheaded, and cut into ten pieces.

Lurking in these and other articles is the assumption that Israel is waging a brutal war against journalists. The fact that Israel consistently loses that war—that the killing of reporters covering the Israel-Palestine conflict only increases the media’s focus on it—only reenforces that assumption. For who but a cruel and rapacious people would murder not for gain but merely for the sake of vindictiveness? Like the age-old accusations that Jews kidnap Christian children and use their blood for obscene rituals, the charge that Israel deliberately killed Abu Akleh and other innocent correspondents reflects an image of Jews as demonic. The suppression of free speech by annihilating those who champion it thus joins the lengthening list of sins—colonialism, racism, apartheid, genocide—cited to erase Israel’s legitimacy.”

When a BBC employee ‘likes’ Tweets relating to an ongoing news story that promote the notion of an “Israeli whitewash” and lead to an article that claims that any Israeli investigation is a “cover up”, BBC impartiality is clearly rather more than just “compromised”.

However, any expectations of “editorial oversight” on this matter should probably be reined in given that the BBC has already repeatedly given airtime and column space to the mainstreaming of that libel. Moreover, BBC promotion of the false notion that Israel targets journalists is not limited to the case of Abu Akleh and is by no means new, as CAMERA UK has documented over the last decade.

The various BBC guidance documents on the topic of social media use – along with the Director General’s declaration that the newer additions would be “rigorously enforced” – will therefore probably do nothing at all to “ensure that the BBC meets its commitment to impartiality”.