Back in March we documented BBC World Service radio’s promotion of a narrative about “Palestinian children being killed in clashes with Israeli forces”:

As noted at the time, no effort was made to inform audiences how many of those killed were involved in violent activity at the time of their deaths and/or how many were members of terrorist organisations.

ITIC analysis of 49 Palestinians killed during counter-terrorism operations in Judea & Samaria between 1/1/22 and 14/7/22 lists twelve people between the ages of 14 – 18, half of whom were linked to a terrorist organisation and eight of whom were engaged in violent activity at the time which included shooting and throwing Molotov cocktails, rocks or grenades.

One would therefore expect responsible journalists to exercise particular caution and to have the full details to hand before reporting or commenting on such incidents. 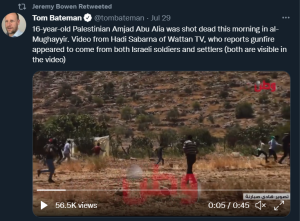 The information missing from Bateman’s account of that incident was available at local media outlets before his Tweet was sent:

“The Israel Defense Forces said that soldiers and Border Police officers responded to a violent protest near the town northeast of Ramallah with riot dispersal means and live fire in some cases. […]

According to the IDF, hundreds of Palestinians set fire to tires and hurled stones at Israeli vehicles passing the area.”

Kan 11 correspondent Carmel Dangor Tweeted a video showing some of that violent rioting on the Alon road hours before Bateman composed his own Tweet. 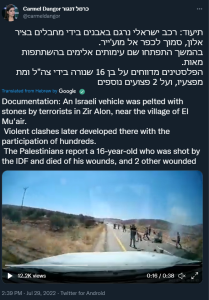 Less than two years has passed since the BBC issued the new social media guidance initiated by its director general in order to safeguard the corporation’s impartiality.

“The Guidance will help to ensure that the BBC meets its commitment to impartiality. The reputation for impartiality is a huge benefit to the BBC, as well as an obligation, and should never been seen as a restriction, or as an inconvenience or anachronism. In a world of polarised debate and argument the value of impartiality as a core value is more pronounced than it has ever been. Impartiality, not taking sides and reflecting all viewpoints, properly applied can support those confronted with difficult editorial judgements in a world of disputation.

The over-riding principle of this Guidance is that anyone working for the BBC is a representative of the organisation, both offline and also when online, including on social media; the same standards apply to the behaviour and conduct of staff in both circumstances.

Those working for the BBC have an obligation to ensure that the BBC’s editorial decisions are not perceived to be influenced by any personal interest or bias. We must retain the trust of the audiences we serve and maintain the BBC’s reputation and impartiality.”

Tom Bateman’s decision to promote information about the death of a “16-year-old-Palestinian” without proper clarification of the circumstances – and its subsequent unquestioning repromotion by his colleagues – is yet one more example of the fact that Tim Davie’s concerns about BBC impartiality are still highly relevant.

THE EMPTY SHELL OF BBC SOCIAL MEDIA USE GUIDANCE