On the evening of August 6th a filmed report was posted on the BBC News website’s ‘Middle East’ page under the headline ‘Israel-Gaza: Emergency services respond after air strike hits building in Gaza’. 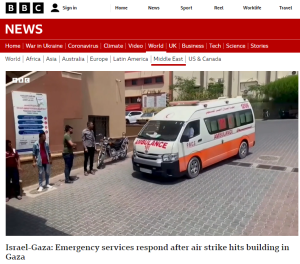 The video itself does not provide any commentary to explain to viewers what they are seeing – including the footage of ambulances, people carrying stretchers and a hospital entrance – but its synopsis reads as follows: [emphasis added]

“Emergency services rushed to the scene of a building in Gaza hit by an Israeli air strike on Saturday.

The attacks come amid Israeli operations against the Palestinian group Islamic Jihad (PIJ). Israel’s PM has said the moves followed “an immediate threat” by PIJ after the arrest of one of its members early this week. The group fired more than 100 rockets into Israel “in an initial response” with most intercepted by Israel’s Iron Dome missile defence system.

Fifteen people have been killed in the air strikes in Gaza, including a child and PIJ leader Tayseer Jabari.

The latest violence is the most serious flare-up between Israel and Gaza in just over a year.”

As we see, the BBC failed to provide any explanation of why that particular building was targeted. In coverage of the same story, the Washington Post reported:

“At least two large buildings near the beach in Gaza City were demolished Saturday. The Israeli official said the buildings had housed command and control centers used by Islamic Jihad. The residents were warned and the buildings evacuated before the strikes occurred, he said.”

“The fighting appeared to be escalating on Saturday afternoon as news media reports showed images of two residential buildings being flattened by Israeli missile strikes. The Israeli military said its helicopters and vessels had targeted what it described as two weapons storage facilities, which it said were located “in the residences of terrorist operatives in the Islamic Jihad terrorist organization in the Gaza Strip.””

Euronews told its readers that:

The destruction was the heaviest yet in the current exchange within the densely packed city, but there were no reports of casualties. In each case, the Israeli military warned residents ahead of the strikes.

In one of the strikes, after the warnings, fighter jets dropped two bombs on the house of an Islamic Jihad member. The blast flattened the two-story structure, leaving a large rubble-filled crater, and badly damaged surrounding homes.”

Not only did the BBC fail to clarify that the building concerned was used by the Palestinian Islamic Jihad terror group, it also refrained from informing viewers that the residents had been instructed to evacuate before the attack took place, despite that fact being known to the BBC.

Over four hours before the report was published on the BBC News website, a journalist working at the corporation’s Gaza bureau had sent the following Tweet relating to the same location, as can be seen by the sign on the right: 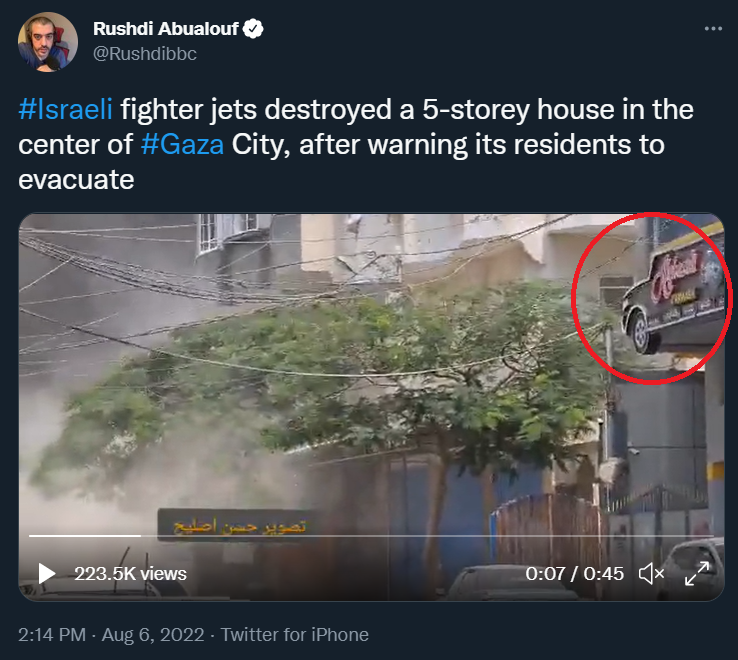 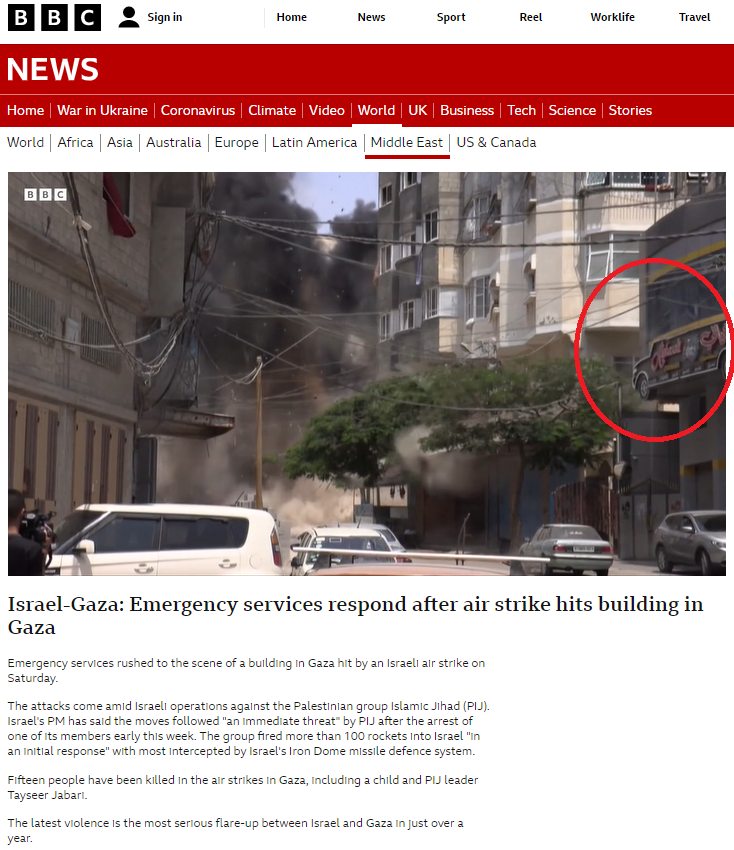 Apparently though BBC News website editors had no qualms about presenting audiences with a context free version of the story which omitted relevant information regarding Israel’s efforts to avoid civilian casualties while carrying out a counter-terrorism operation.