Within the framework of ongoing counter-terrorism operations in Judea & Samaria, on the night between August 1st – 2nd the IDF arrested the area head of the Palestinian Islamic Jihad, Bassem Saadi, along with his son-in-law and aide. A 17-year-old member of the same terrorist organisation was killed during the operation. As reported by the Times of Israel and others:

“In response, the Gaza-based Islamic Jihad announced in a statement that it was declaring a state of “alertness” and raising its fighters’ “readiness” following the arrest of Saadi.”

The BBC did not produce any coverage of those arrests or the ensuing threats from the PIJ. Neither did BBC audiences see any reporting on the subject of the related closure of roads and train lines in areas bordering the Gaza Strip or the lockdown of some communities in the region in order to prevent casualties from potential PIJ attacks.

On the afternoon of August 5th Israel announced the commencement of Operation Breaking Dawn.

“Israel announced the start of a military operation in the Gaza Strip on Friday afternoon with multiple strikes on targets of the Palestinian Islamic Jihad terror group, with leaders saying the actions were necessary after the group refused to back down from its intentions to carry out attacks against the country.

The military said six sites were hit by fighter jets and armed drones as it launched Operation Breaking Dawn. One of the strikes killed one of the PIJ’s senior commanders.

The IDF also targeted the head of the anti-tank guided missile array and several squads preparing attacks. The army estimated that between 10-20 terror operatives had been killed in the opening wave of airstrikes. […]

Earlier in the day [defense minister] Gantz had warned that Israel would take action if the terror group did not halt its preparations for an attack. PIJ had been threatening since Tuesday to attack in response to the arrest of its West Bank leader, causing days of road closures and community lockdowns in areas near the border under immediate threat.”

That senior commander was Tayseer Jabari.

In the hours that followed, the PIJ launched scores of rockets at Israeli population centres (some of which fell short in the Gaza Strip) and the IDF continued its operations against PIJ targets.

The launch of that IDF operation brought BBC reporting back to life and in its opening hours visitors to the BBC News website found two rather unhelpful commentary-free filmed items and two written articles on its ‘Middle East’ page. 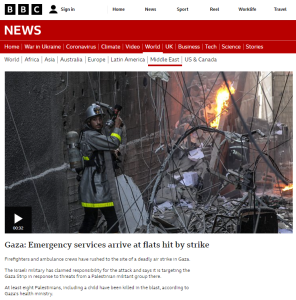 “Firefighters and ambulance crews have rushed to the site of a deadly air strike in Gaza.

The Israeli military has claimed responsibility for the attack and says it is targeting the Gaza Strip in response to threats from a Palestinian militant group there.

At least eight Palestinians, including a child have been killed in the blast, according to Gaza’s health ministry.” [emphasis added] 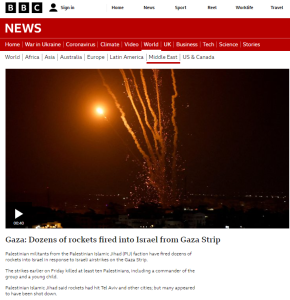 “Palestinian militants from the Palestinian Islamic Jihad (PIJ) faction have fired dozens of rockets into Israel in response to Israeli airstrikes on the Gaza Strip.

The strikes earlier on Friday killed at least ten Palestinians, including a commander of the group and a young child.

Palestinian Islamic Jihad said rockets had hit Tel Aviv and other cities; but many appeared to have been shot down.” [emphasis added]

The BBC did not bother to clarify that, in contrast to the misinformation from the PIJ which it chose to amplify, no hits on Israeli cities had been recorded at that time. 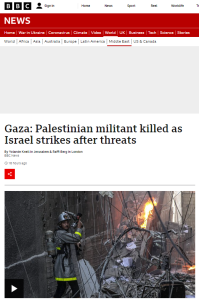 The background provided in that report shows that although the BBC did not report the build-up to the operation in real time, it was aware of those events: [emphasis added]

“On Monday night, Israel arrested Bassem Saadi, reported to be the head of PIJ in the West Bank. He was held in the Jenin area as part of an ongoing series of arrest operations after a wave of attacks by Israeli Arabs and Palestinians that left 17 Israelis and two Ukrainians dead. Two of the attackers came from the Jenin district.

After Bassem Saadi’s arrest, Israel heightened security measures for communities near its border with Gaza, warning that PIJ intended to attack civilians and soldiers. Road closures brought towns and villages in southern Israel to a grinding halt.”

While the report’s current headline refers only to a “Palestinian militant”, earlier versions indicate that the BBC is aware of Jabari’s rank. Four earlier versions of the same report were titled “Gaza: Palestinian commander killed as Israel strikes after militant threats” but that information was subsequently removed from the headline. The current version of the report provides remarkably little information about Tayseer Jabari.

“At least 10 people have been killed by Israeli air strikes in the Gaza Strip, including a top commander of a Palestinian militant group. […]

Four PIJ militants – including Tayseer Jabari – and a five-year-old girl were among those killed since the strikes started, local health officials say.”

Once again BBC audiences were not informed that “local health officials” belong to another terrorist organisation.

“Speaking while on a visit to the Iranian capital, Tehran, PIJ secretary general Ziyad al-Nakhala said “we will respond forcefully to this aggression, and there will be a fight in which our people will win”.

“There are no red lines for this battle… and Tel Aviv will be under the rockets of the resistance.””

The BBC did not bother to clarify that al-Nakhala’s “visit to the Iranian capital” included meetings with senior regime officials and IRGC commanders. Only later in the report are readers told that “PIJ, which is backed by Iran, has its headquarters in Damascus, Syria, and is one of the strongest militant groups in Gaza”. 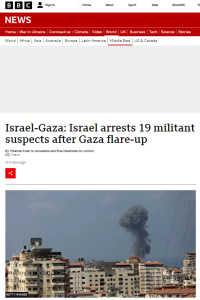 This report likewise downplays the links between the Palestinian Islamic Jihad and the Iranian regime.

“In remarks delivered while on a trip to the Iranian capital Tehran, PIJ secretary general Ziyad al-Nakhala said: “We will respond forcefully to this aggression, and there will be a fight in which our people will win.”

“There are no red lines for this battle… and Tel Aviv will be under the rockets of the resistance”. […]

PIJ, which is one of the strongest militant groups operating in Gaza, is backed by Iran and has its headquarters in the Syrian capital Damascus.”

The report is similarly unforthcoming regarding Tayseer Jabari and uses redundant scare quotes to describe his rank and actions:

“Eleven people have been killed in the air strikes, including a child and PIJ leader Tayseer Jabari. […]

The IDF said Tayseer Jabari was a “senior commander” in PIJ, and accused him of having committed “multiple terrorist attacks” against Israeli civilians.”

The background to the story provided in this report states:

“Life in the Palestinian territory [Gaza Strip] has already become much harder in the past week, after Israel closed its crossings with Gaza amid fears that Islamic Jihad would retaliate for the arrest of one of its leaders in the northern West Bank. […]

The latest conflict closely follows Israel’s arrest of Bassem Saadi, reported to be the head of PIJ in the West Bank, on Monday night.

He was held in the Jenin area as part of an ongoing series of arrest operations after a wave of attacks by Israeli Arabs and Palestinians that left 17 Israelis and two Ukrainians dead. Two of the attackers came from the Jenin district.”

Notably, no mention is made of the ways in which life for Israelis living near the border also became “much harder in the past week” because of the threat of PIJ attacks.

As in the earlier article, this one too refrains from clarifying the links of “Palestinian health officials” to Hamas, which is particularly relevant given that the BBC long since ceased to attempt to provide independent verification of claims of casualties. Unsurprisingly, all these four BBC reports avoid using the words terror, terrorist or terrorism in their portrayals of an organisation which has been on the UK government’s list of proscribed terrorist organisations since 2001, preferring instead to promote the unhelpful term ‘militant’.