Previously we discussed early versions of a report on Operation Breaking Dawn by Yolande Knell and Elsa Maishman which was published on the BBC News website on August 6th.

As noted, that report refrained from clarifying the connections of quoted “Palestinian health officials” to Hamas, which is particularly relevant given that the BBC long since ceased to even try to carry out independent verification of claims of casualties and instead makes do with partial information provided by a terrorist organisation with a record of passing off terror operatives as civilians.

However, in several later versions of that same report – which is now titled ‘Israel-Gaza: Death toll rises as Israel kills second top militant’ – we discover that there are cases in which the BBC does find it necessary to have independent verification before stating something as fact: 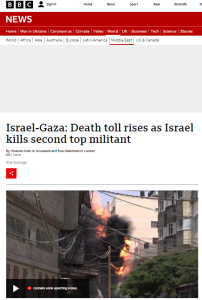 “Gaza’s health ministry blamed “Israeli aggression” for the deaths of Palestinians, and for the 203 people wounded.

Israel accused PIJ militants of accidentally causing at least some of those deaths – claiming on Saturday that the group fired a stray rocket killing multiple children in Jabalia, in the Gaza Strip. The BBC has not been able to independently verify this claim.” [emphasis added]

While some Palestinian media reports did claim that seven people, including several children, had been killed in an Israeli airstrike on Jabalia at around 9 p.m. local time on August 6th, others acknowledged that there was possibly a different reason for their deaths.

Israel quickly announced that its last strike in the area had taken place two hours before that fatal incident and subsequently produced footage showing the failed PIJ rocket launch which caused those deaths. 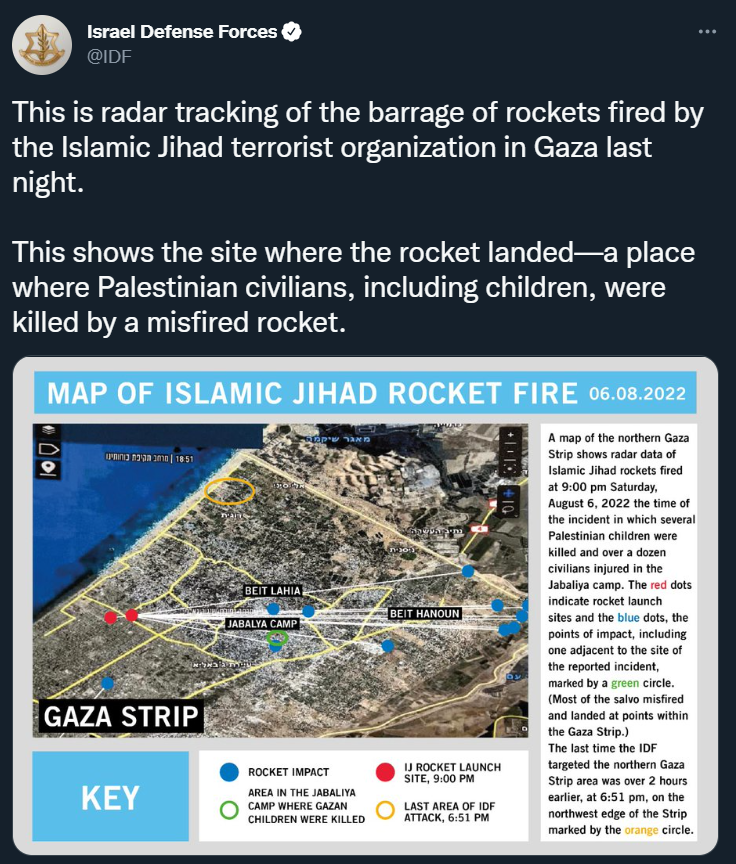 The BBC nevertheless stresses that it “has not been able to independently verify this claim” despite its abysmal past record of reporting on casualties caused by shortfall missiles and its failure to clarify in this report that according to IDF estimates, 120 rockets fired from Gaza since Friday have landed short in the Strip, causing at least nine deaths.

Moreover, the opening lines of the same report refer to “six children” having been killed without clarifying the circumstances:

“Israel has killed a second top militant from the Palestinian Islamic Jihad group, as the death toll continues to rise from air strikes in Gaza.

Six children and several PIJ fighters – including leaders Khaled Mansour and Tayseer Jabari – are among the 29 Palestinians reported to have died.”

“In a second day of violence, Israel on Saturday killed senior PIJ leader Khaled Mansour in an air strike on a house in Rafah, southern Gaza.

The commander had previously survived five assassination attempts by the Israeli military, who accused him of planning militant operations out of Gaza.

Readers are not provided with any further information about the activities of Khaled Mansour over the years, including his responsibility for multiple attacks and rocket fire, or the significance of his death.

Some versions of this report also included a paragraph of gibberish: [emphasis added]

“The latest conflict closely follows Israel’s arrest of Bassem Saadi, reported to be the head of PIJ in the West Bank, on Monday night.

He was held in the Jenin area as part of an ongoing series of arrest operations after a wave of attacks by Israeli Arabs and Palestinians that left 17 Israelis and two Ukrainians dead. Two of the attackers came from the Jenin district.

IDF found illegal weapons and a large sum of money in his house. We know from intelligence we cannot share details we know that they have PIJ operatives in Gaza close to the border trying to attack Israeli civilians.”

So as we see, while the BBC qualifies the cause of the deaths of Palestinian children killed by a shortfall rocket fired by PIJ terrorists by pointing out that it has “not been able to independently verify this claim”, at the same time it continues to uncritically cite equally unverified claims from the “Gaza health ministry” run by another terrorist organisation.

That’s quite some contortion.