The BBC News website’s third written report on the topic of Operation Breaking Dawn appeared on the afternoon of August 7th under the title “Israel-Gaza: Talks under way to broker ceasefire in Gaza”. As events developed that report was updated several times and on the morning of August 8th it carried the headline “Israel-Gaza: Ceasefire holds overnight after days of violence”. 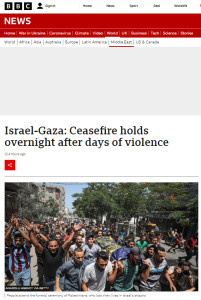 The report opened with the BBC’s standard portrayal of a UK designated terrorist group as ‘militants’: [emphasis added]

Isolated weapons fire from both sides in the minutes before and just after the Sunday night deadline failed to derail the Egypt-brokered truce.”

That convoluted phrasing failed to clarify to readers that the only fire after the ceasefire came into effect came from the Palestinian Islamic Jihad, which continued to launch rockets after the 23:30 deadline. Only in the eighth paragraph were readers told that:

“Israeli media also reported some isolated rocket fire from Gaza in the minutes after the deadline.”

No effort was made to inform readers how many of those people were terrorists. In paragraph eleven the report referred to “Gaza’s health ministry”, once again failing to clarify that that ministry is controlled by the Hamas terrorist organisation which employs a policy of deliberately not differentiating between armed combatants and civilians for PR purposes.

“By Sunday evening, the Palestinian health ministry said that 15 children had been confirmed among the 44 deaths recorded in the latest violence. Gaza’s health ministry has blamed “Israeli aggression” for the deaths of Palestinians and for the more than 300 people wounded.

Israel accused PIJ militants of accidentally causing at least some of the deaths inside Gaza – claiming on Saturday that the group fired a stray rocket killing multiple children in Jabalia.”

By the time this report was published the evidence showing that four children were among those killed on August 6th in Jabaliya by a shortfall PIJ rocket had long been in the public domain, making the BBC’s qualifications superfluous. Notably, the BBC did not choose to show that evidence to its audience.

The BBC report’s reliance on information provided by Hamas health authorities means that readers were not provided with a breakdown of the casualties in the Gaza Strip. As reported by the Times of Israel and others, a significant proportion of those killed were PIJ terrorists:

“In a briefing to reporters, an Israel Defense Forces spokesperson says the military believes 51 people were killed in Gaza during the most recent round of fighting, 24 of them from the Palestinian Islamic Jihad terror group.

The military says its figures are estimates.

According to the military, 16 people uninvolved in the hostilities were killed by Gazan rockets which fell short.

A further 11 people were killed who were not affiliated with terror groups, meaning that a total of 27 Gazan civilians — including a number of children — were killed in the fighting.

The military believes it killed 24 terrorists from the Islamic Jihad terror group.”

Readers were informed in paragraph six that the US president “urged reports of civilian casualties to be investigated in a timely manner”. However, the BBC’s failure to provide any information about the number of combatant casualties and the number of civilian casualties resulting from PIJ rockets that fell inside the Gaza Strip means that readers could not fully understand whether or not that actually means that Biden called for an investigation into the killing of Palestinian civilians by a Palestinian terrorist organisation – presumably by the Hamas terrorist organisation – or whether that calls relates only to Israel.

Remarkably, this BBC report did not provide any information at all about the number of rockets fired by terrorist groups in the Gaza Strip and does not inform readers of the multiple incidents of shortfall rockets which endangered – and in some cases killed – uninvolved civilians.

“Throughout the operation, the Islamic Jihad fired an approximate total of 1,100 rockets, 200 of which landed within Gaza. Of the 990 rockets that made it into Israel, 380 were intercepted by the Iron Dome at a 95% success rate. The other 610 landed in the sea and open spaces.”

Neither did the report make any mention of damage or injuries sustained on the Israeli side of the border as a result of PIJ fire, including a Palestinian man from Hebron working in a factory in Ashkelon.

Only in version seven of this report – published several hours later in the early afternoon of August 8th – was any effort made to address those serious omissions, in the form of statements from a third party:

“A spokesman for the Israel Defense Forces (IDF) said they had information about 35 Palestinian deaths: “11 of them were uninvolved civilian casualties, including the wives of the terror group’s commanders in the south – victims of the IDF attacks.”

Gen Kochav said 1,100 projectiles were fired from the Gaza Strip during the flare-up, with 200 landing inside Gaza.”

One can of course only wonder how many of those who read the earlier versions of that report would bother to re-read its amended version hours later.

Notably, this BBC report about the ceasefire fails to inform readers of its terms. It does however re-promote a context-free film and all versions also included a link titled “The children who died in the 2021 conflict” which leads to a highly problematic report from May of that year in which the death of a child from a shortfall missile is misrepresented as having been the result of an Israeli airstrike. Not only was that inaccurate report never corrected but the BBC is now re-promoting it.

WHEN DOES THE BBC REQUIRE ‘INDEPENDENT VERIFICATION’?