On the evening of August 8th the BBC News website promoted its fourth written report about Operation Breaking Dawn with a gratuitous reference (repeated in the body of the report) to a “peace process” which is of no interest whatsoever to either of the two main terrorist organisations in the Gaza Strip, the Palestinian Islamic Jihad and Hamas.

The article itself – written by the BBC Jerusalem bureau’s Yolande Knell – is headlined ‘Israel-Gaza: Unusual pre-emptive hit by Israel pays off’ with its main photo having been recaptioned by the BBC to read: 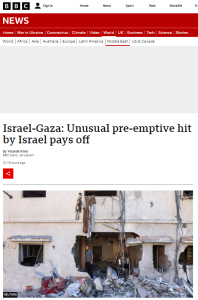 Apparently the BBC has not considered the possibility that those repeated cycles of violence – caused by the activities of terrorist organisations in a territory from which Israel completely withdrew seventeen years ago – contribute both to poverty and uncertainty in the Gaza Strip.

Knell’s article opens with a cameo of an unspecified number of Palestinians “in the rubble of their homes”, while Israelis merely get back to work or leisure activities.

“Palestinian families are setting up makeshift shelters in the rubble of their homes, as they clear up following the intense Israeli bombardment of the Gaza Strip over three days.

In southern Israel – which was targeted with hundreds of rockets by Palestinian Islamic Jihad (PIJ) militants – people have left their air raid shelters to go to their offices, shopping centres and parks.”

Only in paragraph seven are readers informed that the 170 targets of Israeli strikes were PIJ assets and no mention is made of damage to homes and businesses in Israel.

Knell promotes redundant “questions” without clarifying who is asking them:

“Israel says that it launched its military operation, codenamed Breaking Dawn, in response to a direct and immediate threat from PIJ militants. Questions are being asked about the nature of that threat.

Tensions had risen sharply since Israel’s arrest of Bassem Saadi, said to be the top PIJ figure in the occupied West Bank, last week.

Israeli officials are giving few details, but say they had “precise, detailed intelligence” that the Iran-backed militant group – which has its stronghold in Gaza – was planning to attack military or civilian targets nearby with sniper or anti-tank fire.”

She goes on to mention the issue of shortfall missiles:

“The peak of that was on Saturday night, when five people – including four children – were killed in the Jabalia refugees camp in northern Gaza.

However, Israel said that it could prove – with video evidence – that the explosion was not caused by an Israeli air strike, but by a misfired Palestinian rocket.

As in all the other written BBC reporting on the operation, this article does not present readers with the video evidence of that explosion in Jabaliya and at least two other later similar incidents. With videos showing some of the approximately 200 shortfall missiles readily available in the public domain, one can only wonder why the BBC has refrained from using them in its coverage.

“The IDF spokesman has briefed journalists that one-fifth of the rockets PIJ fired ultimately landed and exploded inside the Gaza Strip.

There is no way to check the figures independently, but the spokesman says 15 innocent Palestinians were killed by PIJ fire, compared with 11 by Israeli attacks.”

The Associated Press agency did however attempt to do what Knell claims “there is no way” to do and reported as follows:

“On Saturday night, seven Palestinians were killed in a blast in the crowded Jebaliya refugee camp in northern Gaza. The Israeli military said it carried out no operations in the area at the time. It released video footage purportedly showing a barrage of militant rockets, with one falling short.

Islamic Jihad had announced a rocket attack on the southern Israeli city of Ashkelon, just north of Jebaliya, at around the same time as the explosion.

Video footage of the aftermath circulated online, showing what appeared to be a rocket casing sticking out of the ground on a narrow, busy street. When the AP visited the site on Monday, the casing was gone and the hole had been filled in with dirt. Palestinians are usually keen to display evidence of Israeli airstrikes to international media.

Al-Mezan attributed the blast to a “projectile,” and the PCHR said it was still investigating.

On Sunday night, an explosion killed five Palestinians ages 4 to 17 at a cemetery in Jebaliya, also around the same time Islamic Jihad announced a barrage of rockets. The Israeli military said it was investigating.

Visiting both sites in Jebaliya, the AP saw none of the tell-tale signs of an Israeli strike — the wide craters left by F-16s or the narrow holes caused by drone strikes.

In a third suspicious explosion, one of the Hamas-affiliated policemen, who was off-duty, was killed Sunday along with three of his young children in the Bureij refugee camp in central Gaza. Hamas, a far more powerful militant group that has fought four wars with Israel, stayed out of the latest fighting, and Israel appears to have been careful not to target it.”

Licence fee payers who fund the BBC’s permanent bureau in the Gaza Strip may well be wondering why, unlike AP, the corporation did not send staff to visit the sites where those shortfall missiles had landed and whether that has anything to do with Hamas’ known practice of intimidating journalists.

In fact, another report from AP gives details of restrictions imposed by Hamas which were opposed by the Foreign Press Association.

“Palestinians who work with foreign journalists were first informed of the new rules earlier this week in messages sent by the Hamas-run Interior Ministry. They were ordered not to report on Gazans killed by misfired Palestinian rockets or the military capabilities of Palestinian armed groups, and were told to blame Israel for the recent escalation.”

If that is the reason why Yolande Knell and her colleagues could not “check the figures independently”, then BBC audiences should obviously be told so.

It is also worth remembering that – as we have repeatedly recorded over the past decade – the BBC has shown little commitment to accurate and impartial reporting of cases in which Palestinian children in the Gaza Strip were killed or injured by the munitions of terrorist organisations.

2014: WHY DOESN’T THE BBC TELL AUDIENCES ABOUT GAZA’S SHORTFALL MISSILES?

In the paragraph immediately following Knell’s claim that “[t]here is no way to check the figures” provided by an Israeli spokesman, she uncritically quotes casualty figures provided by “health officials” without clarifying that they belong to the Hamas terrorist organisation and without mentioning any need to independently verify that information, even though Hamas employs a policy of deliberately not differentiating between armed combatants and civilians for PR purposes.

“Palestinian health officials put the total number of dead at 44, including 15 children and four women. More than 300 were injured.”

At no point in Knell’s report does she clarify that the PIJ acknowledged that 12 of its members were killed during the operation and another terror group claimed one of the dead.

As we have noted in the past, the BBC long since gave up trying to independently verify casualty figures or civilian-combatant casualty ratios provided by the Hamas-run health ministry in the Gaza Strip. Instead, its coverage is based on data obtained from partial sources which it promotes to audiences without fact-checking.

Together with the absence of journalistic curiosity concerning casualties caused by shortfall missiles evident yet again during this operation, that means that BBC audiences are once again left with a highly distorted view which fertilises the politically motivated myth that Israel targets civilians, including children.

WHEN DOES THE BBC REQUIRE ‘INDEPENDENT VERIFICATION’?