The first clause of the BBC’s public purposes states:

“The BBC should provide duly accurate and impartial news, current affairs and factual programming to build people’s understanding of all parts of the United Kingdom and of the wider world. Its content should be provided to the highest editorial standards. It should offer a range and depth of analysis and content not widely available from other United Kingdom news providers, using the highest calibre presenters and journalists, and championing freedom of expression, so that all audiences can engage fully with major local, regional, national, United Kingdom and global issues and participate in the democratic process, at all levels, as active and informed citizens.” [emphasis added]

Nevertheless, whenever conflict erupts between Israel and Palestinians one of the first interviewees rolled out by the BBC is a person who actively hinders audience understanding of both a particular situation and the broader picture with a barrage of mostly unchallenged lies, distortions and politically motivated talking points. Sure enough, during Operation Breaking Dawn the BBC once again provided platforms for the entirely predictable propaganda of Husam Zomlot.

The lead item (from 00:09 here) in the August 7th afternoon edition of the BBC World Service radio programme ‘Newshour’ – presented by James Coomarasamy – concerned the hostilities between Israel and the Palestinian Islamic Jihad terrorist organisation. 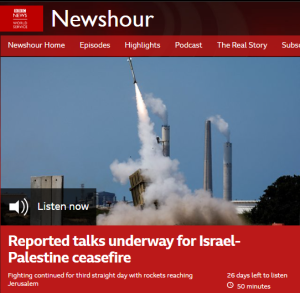 Listeners heard amplification of claims from the Hamas-run Gaza health ministry concerning casualties and recordings of statements from the director of Shifa hospital in Gaza City, the spokesman of the PIJ terror group and Israel’s defence minister, followed by a report from the BBC Jerusalem bureau’s Yolande Knell. At 05:36 Coomarasamy introduced his sole interviewee. [emphasis in italics in the original, emphasis in bold added]

Coomarasamy: “We can speak now to Husam Zomlot who’s head of the Palestinian mission to the UK. He’s also an advisor to the Palestinian president Mahmoud Abbas and he’s joining us live now from Ramallah in the West Bank. […] And…eh…your view of this latest resumption of violence.”

Zomlot: “It’s not violence, Jamie. Let’s call it as it is. This is an aggression. This is a war of choice by Israel on the basis that they have some information, then they go and bombard a city that has been besieged for last 16 years. People have nowhere to go, have no shelters. People are staying in their residential compounds and rockets are falling on their heads. More than 32 Palestinians have died so far in the last 48 hours, including 6 children. Mostly families – entire families – and therefore this is a movie we have seen. Israel has been committing such war crimes and crimes against humanity for two reasons primarily. The first, the Israeli politicians always ahead of elections use Palestinian blood to compete on elections. Who has more blood on his hands? Who can be more right-wing, all that. We have seen this many times.”

Coomarasamy made no effort to question Zomlot’s ridiculous portrayal of Israeli elections, to clarify to listeners that the majority of those six children died as a result of a shortfall rocket fired by the PIJ which landed in Jabaliya the previous evening or to challenge Zomlot’s inaccurate portrayal of counter-terrorism measures as a ‘siege’. Neither did he enquire why Hamas has preferred to construct tunnels for the purpose of terrorism rather than shelters for civilians during those sixteen years. Zomlot’s repeated use of misleading pseudo-legal claims did not prompt any challenge from Coomarasamy throughout the entire three-minute item.

Zomlot: “And international community is simply allowing all this to happen, not taking up the real responsibility to enforce international law because extra-judicial killing is not allowed.”

Coomarasamy: “Well what about the response of Islamic Jihad though? I mean they have responded with air s…rockets being fired into Israel. I mean are…are they within their rights to do that? Aren’t they just making matters worse? Aren’t they bringing more destruction on them and on the people of Gaza?”

Zomlot: “Err well err this isn’t about the Islamic Jihad. Israel started this war here in the West Bank. The Pales…”

Coomarasamy: “Well this particular…this particular outbreak is very much…and Israel says it’s down to intelligence they have that they were going to be attacked by Islamic Jihad.”

Zomlot: “Then tomorrow any other country would say they have intelligence about groups in London and they have the right to go and bombard the entire city of London. This is not international law. This is not logic, this is not common sense. This is thuggery. On the part of Israel it’s thuggery. It’s a country that has gone absolutely mad, that is competing only to break the law, competing to inflict more oppression. And international law is absolutely clear; an occupying power has no right to do so. It has default responsibility to protect the people under occupation…”

Coomarasamy next promoted the bizarre idea that Israeli military operations are based on ‘feelings’:

Coomarasamy: “Hussam Zomlot, I know you have Tweeted about this but do you not agree that Israel has the right to defend itself if it feels…if it feels that it’s going to be attacked?”

Zomlot: “No, no, no I do not agree that Israel has the right to protect itself because this mantra, this sentence has allowed Israel, since its inception, to commit the most heinous crimes against humanity, against the Palestinian people. This very sentence…Israel as an occupying force – illegal occupying force, colonial occupying force, inflicting apartheid regime as per Amnesty International which is a UK based – has no rights. The only rights are for the people under occupation. They have the right to defend themselves and to achieve their internationally agreed…”

Even Zomlot’s citing of the discredited NGO Amnesty International did not prompt a reaction from Coomarasamy who was apparently quite happy to let his interviewee’s blatant distortions go unchallenged.

Coomarasamy: “Husam…Husam Zomlot, we have to leave it there.”

Although Coomarasamy then told listeners that he hoped “to speak to an Israeli official later on”, that did not happen and so listeners heard only the blatantly one-sided distortions and disinformation from Zomlot.

Zomlot was also invited to do an even more pointless and unchallenging interview on BBC World News TV on the same day which was promoted on social media by him and his office.

The BBC has been regularly interviewing Husam Zomlot for at least eight years. That is more than enough time to have grasped that by providing him with platforms from which to spread his unchallenged disinformation and politically motivated smears, the corporation is doing the exact opposite of providing its audiences with information which enhances their understanding of the Palestinian-Israeli conflict.