The current version of the BBC News website’s report about the shooting attack in Jerusalem on August 14th is headlined ‘Palestinian gunman wounds eight in Jerusalem attack’ and is credited to no fewer than three writers: Anna Foster, David Gritten and Matt Murphy. 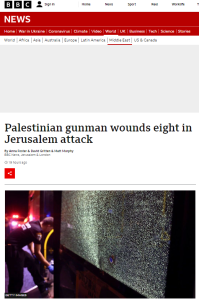 Readers may notice that the report does not include the words terror or terrorist at all.

Those familiar with the BBC’s editorial guidelines may recall that the section concerning ‘War, Terror and Emergencies’ includes a clause titled ‘Use of Language’ which, while acknowledging that terrorism exists, purports to explain why the BBC should not use the term terrorist itself. [emphasis added]

11.3.6 The word ‘terrorist’ itself can be a barrier rather than an aid to understanding. We should convey to our audience the full consequences of the act by describing what happened. We should use words which specifically describe the perpetrator such as ‘bomber’, ‘attacker’, ‘gunman’, ‘kidnapper’, ‘insurgent’ and ‘militant’. We should not adopt other people’s language as our own; our responsibility is to remain objective and report in ways that enable our audiences to make their own assessments about who is doing what to whom.”

As we all too frequently have cause to document here, while the BBC strictly adheres to that instruction in its reporting on terror attacks against Israelis, it regularly ignores it in coverage of domestic stories, as shown in this recent example.

Interestingly, earlier versions of the same report – most of which were credited to Matt Murphy – did use the words terror and terrorist in attributed statements from Israeli officials. Those references were however later removed. 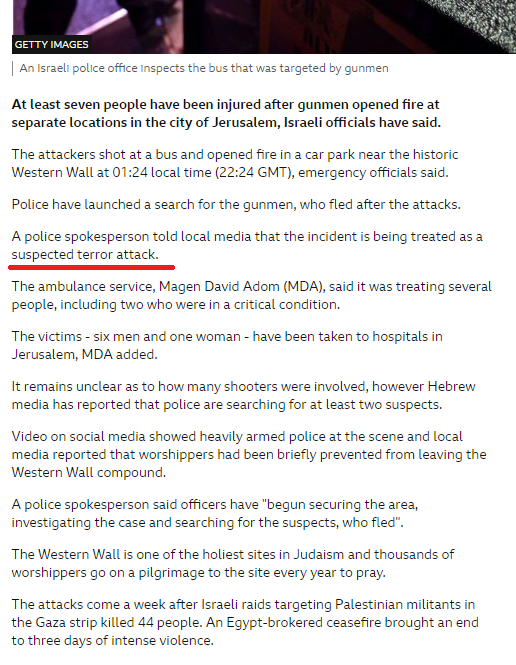 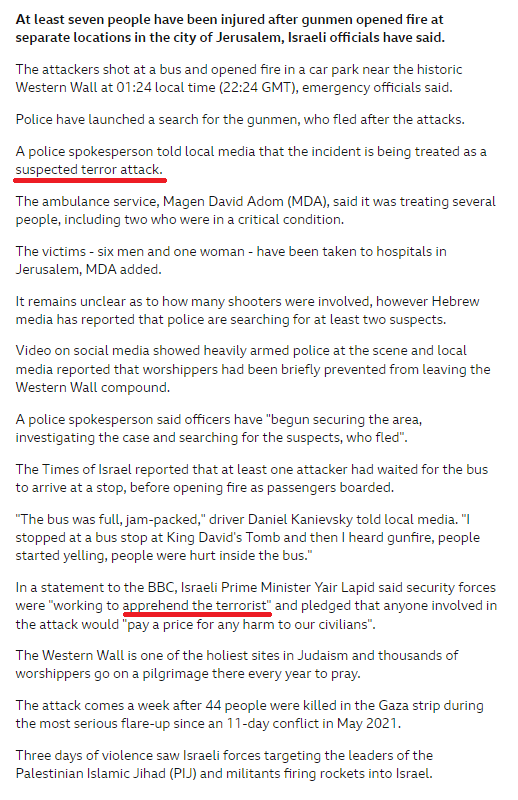 “The gunman, identified as a resident of occupied East Jerusalem, fled the scene but later turned himself in.

Israeli police said he had a criminal record but no known affiliations with Palestinian militant groups.”

No further details of Sidawi’s criminal record are provided. The Jerusalem Post reported that “[s]ources in east Jerusalem said it was not clear whether Sidawi, who has a criminal background, was affiliated with any terrorist group”.

The current version of the BBC’s report tells readers that “Palestinian militant groups praised the shooting” but does not clarify which “militant groups” or what they actually said. The BBC did not report that the attack was also praised in posts on the official Facebook account of Fatah, the dominant faction in the Palestinian Authority, headed by Mahmoud Abbas.

The final paragraphs of the report bring up a topic unrelated to its supposed subject matter:

“Palestinian militant groups praised the shooting, which came a week after the latest violent escalation in the Gaza Strip.

At least 47 people were killed in Gaza over three days as Israeli forces targeted leaders of the Palestinian Islamic Jihad (PIJ) and militants fired more than 1,000 rockets into Israel.

Several Israelis sustained minor injuries as a result of PIJ rockets that landed inside Israel.”

Once again we see uncritical BBC amplification of information provided by “Gaza’s health ministry” without any clarification of the fact that it is run and controlled by the Hamas terrorist organisation. Interestingly, the previous version of the report told readers that “Israeli officials have said many civilians were killed by PIJ rockets that failed to clear Gaza” but that reference to shortfall missiles was removed from the version currently appearing online.

Newsreader: “Eight people including a pregnant woman were wounded in Jerusalem in the early hours of this morning when a gunman opened fire. The attacker, reportedly a Palestinian man, fled the scene but Israeli police later said he’d turned himself in. Here’s our Middle East correspondent Anna Foster.”

Foster: “The attacker opened fire at two locations in the city, targeting a bus as well as people waiting in a car park near the Western Wall. The 26-year-old, who lives in East Jerusalem, has a criminal record but no known affiliations with militant groups. Police believe he acted alone but fear the incident might inspire copycat attacks. The shooting comes a week after the latest violent escalation in Gaza. Israeli forces targeted the leadership of Palestinian Islamic Jihad whose militants fired around a thousand rockets at Israel. The ministry of health in Gaza says 35 civilians died.” [emphasis added]

Once again the BBC’s shoehorning of that recent conflict into another story altogether failed to clarify that Hamas controls Foster’s quoted source of casualty figures and erased the relevant issue of shortfall missiles from the picture entirely.