As we have documented, the BBC’s cross-platform coverage of Operation Breaking Dawn has included only passing references to the issue of the Palestinian Islamic Jihad’s shortfall missiles which resulted in the deaths of several people, including children, inside the Gaza Strip.

For example Yolande Knell, who produced much of the corporation’s reporting on the operation, wrote in her August 8th article that “Palestinian witnesses do report seeing faulty PIJ launches in this conflict” but went on to stress that the BBC had “no way to check the figures independently” and so could not confirm the deaths resulting from PIJ fire.

As we noted at the time, the BBC has long demonstrated very little commitment to accurate and impartial reporting of cases in which Palestinians, including children, in the Gaza Strip were killed or injured by the munitions of terrorist organisations and so the fact that it adopted the same approach this time round does not come as much of a surprise. However, another factor which needs to be taken into account is the restrictions on reporting imposed (not for the first time) by Hamas.

“It is totally forbidden to do stories mentioning that the reasons for martyrdom are friendly fire.”

While those restrictions were rescinded following objection from the Foreign Press Association, as Wallis Simons observes, there can be little doubt that they had an effect on the reporting of the conflict.

Nevertheless, that blatant abuse of press freedom did not deter the BBC from interviewing representatives of Hamas on radio or uncritically quoting and promoting its health ministry’s claims regarding casualty figures.

Both Hamas and the PIJ are designated as terrorist organisations by the UK and so it would seem that those World Service radio interviews with Hamas officials were granted advance approval by David Jordan, as required by BBC editorial guidelines:

While the criteria for such approvals are not transparent, one would expect that it would have to be shown that such proposed interviews have some sort of journalistic value which contributes to meeting the BBC’s public purposes. That was certainly not the case in those radio interviews.

Neither was it the case when the BBC’s Anna Foster – until recently based in Beirut – paid what seems to be her first visit to the Gaza Strip (apparently on August 12th) and sat down with Hamas’ spokesman Ghazi Hamad for a face-to-face interview.

On August 16th the BBC News website published a written report by Foster:

On the same day an audio version of Foster’s report was aired on BBC World Service radio’s ‘Newsday’ (from 17:39 here) and a filmed version was broadcast on the BBC World News TV channel.

In the TV version viewers saw Foster talking to Hamad:

Foster: “The militant group Hamas, which runs the Gaza Strip, didn’t fire its rockets this time, but it said it wasn’t ready to discuss working with Israel.”

Foster [to Hamad]: “But you have been working with them in some ways, haven’t you, to try and increase work permits, to try and maintain calm, to help people who live here?”

Hamad: “OK, sometimes we try. There is some points, a humanitarian situation that we want to help people now to work and to get salaries and something like that. But I think this will not end the round of violence in this region. If the occupation is ended, everything will be OK after that.”

In the audio version, listeners heard the following:

Foster: “The militant group Hamas which runs the Gaza Strip and is designated a terror organization by the US, UK and others didn’t fire its rockets this time. If it had, the conflict would have been even more serious and could have developed into another war. I talked to its spokesman Ghazi Hamad.”

Foster: “At the end of the Israeli operation Yair Lapid talked about the potential for a future where Hamas [sic] and Israel might work together.”

Hamad: “What is on the ground? The Israel all the time they talk about peace, talk about sweet promises but in the ground, murders, killing, assassination. So…”

Foster: “But you have been working with them in some ways, haven’t you, to try and increase work permits, to try and maintain calm.”

In the written version – titled “‘Gaza’s children are used to the death and bombing’” – Foster describes her interview with Hamad as follows: 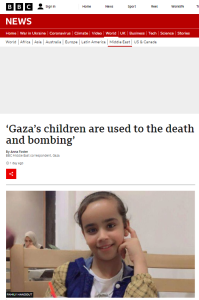 I pressed him about the attacks on Israeli civilians carried out by Hamas, and the indiscriminate firing of rockets into civilian areas, from which Israel says it must defend itself. Targeting civilians is a war crime.

He replied: “We don’t fight against anyone, just the occupation. Israel could have the ability to avoid the civilians, but I think if they want to kill someone as a fighter, they kill all the people around him in order to kill him.”

That latter disinformation was not challenged by Foster.

“Hamas runs the Gaza Strip. The group is designated a terrorist organisation by the US, UK and others. It says its aim is to end the Israeli occupation by any means possible, including armed struggle. It has a large stock of weapons, which it uses, firing them mainly towards border cities in Israel.”

At no point in any of the versions of her report did Foster bother to clarify that when Hamas says ‘occupation’ – as Ghazi Hamad did in all three – it is not referring to the Gaza Strip from which Israel disengaged seventeen years ago, but to Israel in its entirety. That serious omission on Foster’s part clearly compromises audience understanding.

Foster could have used that one-on-one with Hamas’ spokesman to ask him why it did not prevent the Palestinian Islamic Jihad (as it has done in the past) from firing over a thousand missiles at Israeli civilian targets. She might have enquired why Hamas places its own military assets in civilian residential areas and allows the PIJ to do the same. She could have asked why Hamas diverts building materials to the construction of terrorist assets rather than to the rebuilding of housing damaged in conflicts like the ”tower block […] destroyed more than a year ago now” that she highlighted in her filmed report or “Samir’s destroyed kitchen” described in her written article.

However, Foster did not pose any remotely challenging questions which would have enhanced audience understanding of the story she purports to tell and so her reports follow the usual clichéd pattern seen so often in BBC reporting from the Gaza Strip, focusing audience attentions on dead children, rubble, Hamas-supplied casualty figures and “the blockade”.

The written report’s sole reference to shortfall missiles in Foster’s own words makes no effort to clarify how many people were killed as a result or what proportion of the BBC quoted casualty figures supplied by Hamas they represent.

“Several of their [PIJ] rockets misfired, falling back into Palestinian communities and causing deaths and injuries.”

Foster gives a ‘he said-she said’ account of an incident in Jabaliya which is still under investigation.

Significantly, Foster did not make any effort to challenge her Hamas interviewee on the issue of the ban it imposed on journalists’ reporting of shortfall missiles and other topics. In fact, BBC audiences have not seen or heard a word about that subject on any platform.

The bottom line is of course that if indeed the BBC’s Director of Editorial Policy and Standards was approached for approval of Foster’s in person interview with Hamad, the result is three reports that do nothing more than amplify the talking points of a terrorist organisation proscribed by the UK that regularly abuses the very press freedom which the BBC claims to champion.