Credited to David Gritten, the article relates to a story that began the previous day and is fine – in so far as it goes. 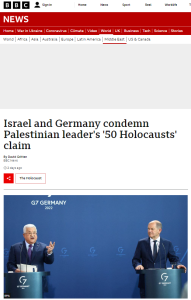 “Mr Abbas travelled to Berlin with the aim of winning Germany’s support for a bid by the Palestinians to join the United Nations as a full member state and asking it to help restart long-stalled peace talks with the Israelis.

After meeting Mr Scholz at the Federal Chancellery, the president was asked by reporters whether he planned to apologise to Israel and Germany ahead of the 50th anniversary of a deadly attack by Palestinian militants on Israeli athletes at the Munich Olympics.”

However readers are not told of the links between those so-called “militants” and Abbas’ Fatah party or of Abbas’ own alleged connection to that terror attack. Neither are they informed that, like other terror attacks, the Munich Olympics massacre is regularly lauded and glorified by Fatah and the Palestinian Authority, including naming a school and a university gate after one of its planners.

The BBC’s report does not make any mention of Abbas’ earlier remarks during the same press conference concerning “an apartheid regime”, which did get pushback at the time from the German chancellor.

The report has not been updated to include information about the announcement that the German police are investigating Abbas’ remarks relating to the Holocaust. Neither does it inform BBC audiences of the support Abbas’ offensive remarks received from his domestic audience and from members of his own party and other Palestinian officials, as well as factions in Gaza including Hamas and the Palestinian Islamic Jihad.

The BBC’s report tells readers nothing at all about Abbas’ own record on the topic of the Holocaust or the Palestinian Authority’s regular use of Nazi analogies.

The BBC knows full well that this is not the first time that the Palestinian Authority president has employed such offensive rhetoric. In May 2018 the BBC News website reported on widely condemned “Holocaust remarks” made by Abbas and a similar ‘apology’:

Nevertheless, in this report the BBC once again made no effort to provide its audience with the full context to Abbas’ latest outburst and thereby provide information which would enhance their understanding of the Palestinian leader it frequently portrays as a ‘moderate’ proponent of the two-state solution.