Back in May, BBC World Service radio presented its listeners around the globe with an entirely one-sided view of the long-running story of Masafer Yatta: 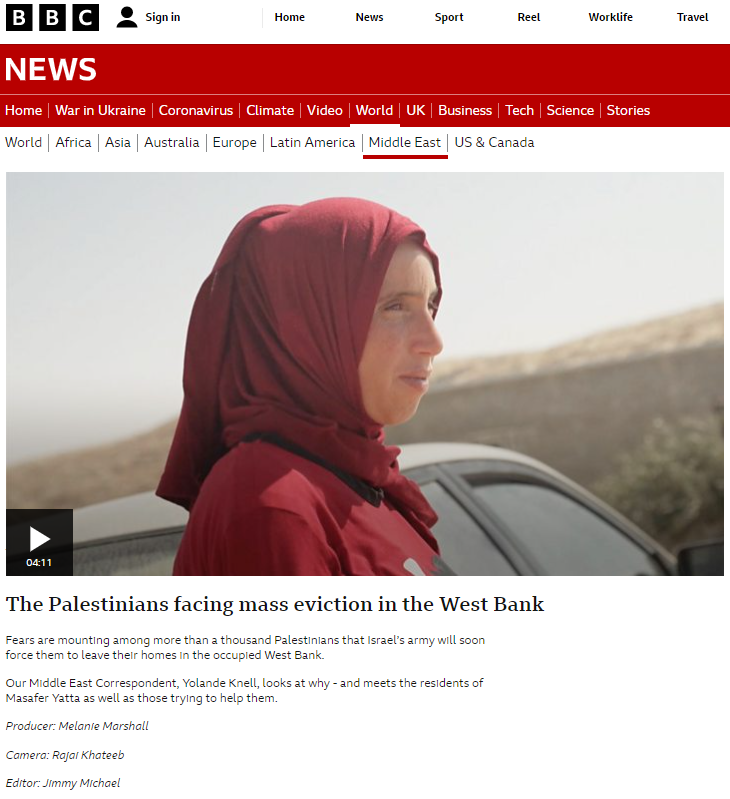 The same report was aired multiple times on BBC World News TV (and on the American station PBS) throughout that day and on the evening of August 29th, an audio version was aired on BBC World Service radio’s ‘Newshour’ programme (from 14:06 here) and on BBC Radio 4’s ‘The World Tonight’ (from 35:22 here).

In the introductions given to both those audio reports as well as in the filmed version, BBC audiences are misled regarding the sequence and timing of events. [emphasis in italics in the original, emphasis in bold added].

Newshour, Tim Franks: “More than a thousand Palestinians fear that Israel’s army will soon force them to leave their homes in the occupied West Bank. In May the Israeli High Court sanctioned plans to expel them to make way for Israeli military training in an area known as Masafer Yatta. If the mass eviction goes ahead, it could be the biggest in the region in decades. UN experts have warned Israel it could also amount to a war crime.”

The World Tonight, Julian Worricker: “More than a thousand Palestinians fear that Israel’s army will soon force them to leave their homes in the occupied West Bank. In May the Israeli High Court sanctioned plans to expel them to make way for Israeli military training in an area known as Masafer Yatta in the south of the occupied Palestinian territory. If the mass eviction goes ahead, it could be the biggest in the region in decades.”

Filmed report [02:49]: “Hundreds of Palestinians face eviction from this area after an Israeli court ruled it should be an army training area.”

In fact, as noted in the relevant High Court ruling, the area concerned was designated as a military zone over forty years ago and the unauthorised construction of buildings and structures by Palestinians, who failed to prove any legal claim to the land, took place after that.

The BBC, however, inverted the sequence of events in all its reports, thereby materially misleading audiences on multiple platforms.

The “UN experts” cited by Franks in his introduction and by Knell in her filmed and audio reports go unnamed. BBC audiences are not informed that they are in fact special rapporteurs who, as we saw last year when the BBC quoted and promoted others, are not United Nations staff members. One of the special rapporteurs who has commented on the Masafer Yatta case is Francesca Albanese who both before and during the brief time that she has held the role of ‘special rapporteur on the situation of human rights in the Palestinian Territory occupied since 1967’ has already displayed considerable anti-Israel bias. Predictably, that information is not provided to audiences, with the BBC instead preferring to use the ‘halo’ term “UN experts” to supposedly add authority and legitimacy to the claim of a “war crime”.

Viewers and listeners are not informed that al-Adraa (also spelt Basel Adra) is a professional activist who is involved with the political NGO B’tselem and writes for the radical websites +972 Magazine and Sikha Mekomit (Local Call) or that he runs a Twitter account dedicated to the topic of Knell’s reports.

Despite that failure to meet BBC editorial guidelines concerning ‘contributors’ affiliations’, in both versions of Knell’s report al-Adraa was given an uninterrupted platform – following Knell’s insertion of the standard, partial BBC mantra concerning ‘international law’ –  from which to promote inaccurate claims.

Knell: “Nearby, Jewish settlements are growing. They’re seen as illegal under international law but Israel disagrees.”

Al-Adraa: “These settlers come here, steal our land as Palestinians, digging on it and building their homes. I mean the state supports them doing that and provides the infrastructure for the settlers on my land. But the same state and the same government is uprooting us from here by demolishing our homes, schools, water wells and roads.”

Knell made no effort to clarify either at that point or elsewhere in her reports that the Palestinians currently located in Masafer Yatta had failed to prove ownership of the land concerned throughout twenty years of court cases. Neither did she bother to explain that the location is sited in Area C and hence “is under full Israeli control” because it was categorised as such (pending final status negotiations) in the Oslo Accords signed by the PLO representatives of the Palestinians. The fact that the area from which she reports was previously illegally occupied by Jordan and designated part of the Jewish homeland by the League of Nations did not prompt Knell to provide the necessary qualifications concerning her interviewee’s claims concerning “my land” and “our land as Palestinians”.

In her filmed report Knell likewise ignored BBC editorial guidelines on ‘contributors’ affiliations’ when she gave an unchallenged platform to the advocacy director of the political NGO ‘Breaking the Silence’.

Notably, neither of Knell’s reports includes an interview with any Israeli representative. Viewers of the filmed item are told that “The IDF didn’t answer our request for an interview” while in the audio version Knell states “The Israeli military doesn’t agree to an interview”.

Clearly insufficient effort was made to provide viewers or listeners with the objective facts behind this story (including the foreign intervention by the EU and others which includes illegal construction) or to present a balanced report that includes the Israeli point of view. Instead, BBC audiences around the world got yet another example of BBC ‘journavism’: the blatant amplification of political campaigning by anti-Israel NGOs and activists under the guise of reporting, at the expense of the corporation’s obligatory public purposes.