On the evening of August 30th the BBC News website published a report headlined ‘Israeli court sentences Gaza aid worker to 12 years in prison’ on its ‘Middle East’ page.

Written by David Gritten, the article relates to the latest chapter in a story the BBC has twice covered in the past (see ‘related articles’ below), with both previous reports presented as ‘more on this story’ at its foot.

The caption to the photograph illustrating the report about a legal case in which the defendant was found guilty in June provides signposting for its overall tone:

“World Vision said there was a lack of substantive, publicly available evidence in Mohammed Halabi’s case”

In paragraph four readers find a link to a statement put out by the organisation which employed the convicted “aid worker”: 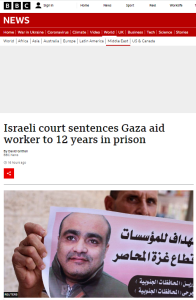 “An Israeli court has sentenced a Palestinian aid worker, convicted of diverting funds to the militant group Hamas, to 12 years in prison.

Mohammed Halabi, the head of World Vision’s Gaza office, was found guilty in June of 13 charges, including being a member of a terrorist organisation.

He has denied all the allegations since his arrest in 2016 and plans to appeal.

World Vision said the sentence was “deeply disappointing” and “in sharp contrast to the evidence and facts”.”

Three additional paragraphs of the thirteen-paragraph report are later given over to further promotion of statements from ‘World Vision International’:

“World Vision complained there had been irregularities in the judicial process and a lack of substantive, publicly available evidence. It also noted that an independent audit and investigations by donor governments had found no evidence of missing funds or criminal behaviour.

“The arrest, six-year trial, unjust verdict and this sentence are emblematic of actions that hinder humanitarian work in Gaza and the West Bank,” the Christian charity warned on Tuesday.

“It adds to the chilling impact on World Vision and other aid or development groups working to assist Palestinians.””

Another paragraph promotes an obviously inaccurate claim from Halabi’s lawyer:

“”He says that he’s innocent, he did nothing and there is no evidence,” Halabi’s lawyer, Maher Hanna, said after Tuesday’s sentencing. “On the contrary, he proved in the court above any reasonable doubt that he made sure that no money will be [given] directly to Hamas.”” [emphasis added]

Details of the case itself take up just two paragraphs and an additional one notes a statement from a representative of the prosecution. A link to an AP report on the same story appears in the last paragraph together with a second-hand statement from Israel’s foreign ministry.

The most bizarre part of the report however comes in the form of a link to a Tweet from a person who can hardly be considered objective on the topic of the Israeli legal system.

“Human Rights Watch condemned what it called a “profound miscarriage of justice” and said detaining Halabi for six more years was “cruel and inhumane”.”

Readers may recall that the writer of that promoted Tweet – Omar Shakir – was refused renewal of his work visa by the Israeli authorities in May 2018 due to his ties to the anti-Israel BDS campaign and, following several court sessions, left the country in November 2019.

Nevertheless, despite the records of both Shakir himself and the NGO he represents, the BBC chose to promote his comment on this story as though he were some kind of impartial authority on the topic of Israel’s legal system, while concealing the obviously relevant issue of the many years of anti-Israel campaigning and lawfare by ‘Human Rights Watch’.