The report actually relates to the executions of five people by Hamas that morning, telling readers that:

“Two Palestinian men accused of collaborating with Israel have been executed in the Gaza Strip, the Hamas-run interior ministry says.

A statement did not name the men – it only gave their initials and age – but said they had given information that had led to the killing of Palestinians.

Three others were also executed – on charges of murder.”

“The two men accused of spying for Israel were arrested in 2009 and 2015 and “convicted by a court of treason and conspiring with foreign parties”, the interior ministry statement said.”

“The Ministry of Interior said one of the convicts, a 44-year-old resident of Gaza City, was arrested on October 30, 2009, on charges of “communicating with hostile foreign parties” and working for Israeli intelligence since 2001.

According to the ministry, the man provided Israel with information that led to the killing of Palestinians.

The second man accused of collaboration with Israel was a 54-year-old resident of Khan Yunis. Hamas claimed that the convict, who was arrested on February 15, 2015, was recruited as an informant in 1991.

He was accused of providing Israeli security forces with information about members of Hamas and other armed groups, including their places of residence and their jobs, as well as the locations for launching and manufacturing rockets.”

“Since 2007 when they asserted control over Gaza, the Hamas-run authorities have carried out at least 27 executions, most recently in April 2017.”

However, BBC audiences are not informed that under Palestinian Authority law, all executions require approval from the president, or that in 2005 Mahmoud Abbas issued a moratorium on death sentences.

Curiously, the BBC chose to illustrate this report with a photograph which has nothing to do with the story’s subject matter. 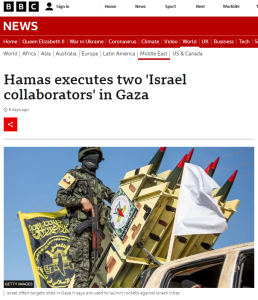 The original caption to that image photographed on August 24th reads:

The BBC News website however chose to replace that caption with its own: [emphasis added]

The final paragraph of the report erases Egypt’s occupation of the Gaza Strip in 1948:

As we see (not for the first time), the BBC cannot resist gratuitously shoehorning Israel and ‘the conflict’ even into a report about internal Palestinian affairs.