On the evening of September 20th the BBC Jerusalem bureau’s Tom Bateman tweeted what he described as “important new analysis”. 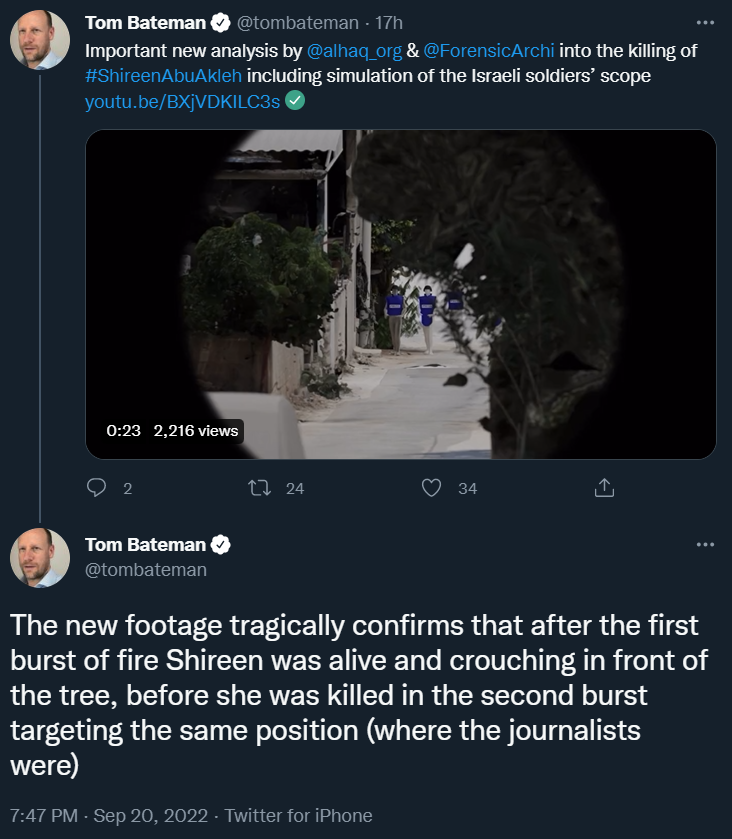 As we see, Bateman obviously did not consider the uncritical promotion of this latest collaboration between the PFLP terror group-linked NGO ‘Al Haq’ and the politically motivated ‘research’ organisation ‘Forensic Architecture’ (with help from the Qatari outlet which employed Abu Akleh) by a supposedly impartial BBC journalist to be at all problematic.

The video promoted by Bateman to over five thousand followers of course arrives at precisely the conclusions that those politically motivated organisations could be expected to reach concerning the death of Shireen Abu Akleh. Even the use of the terms “Israeli occupying forces” and “IOF” in its commentary (instead of Israel Defence Forces or IDF) does not appear to have raised any alarm bells with Bateman.

But of course like his colleagues, from the moment that news of the incident broke Bateman has adopted and promoted the unproven version of events put out by Abu Akleh’s employer, her family, the Palestinian Authority and assorted political NGOs.

It is hence sadly unsurprising to find him yet again unquestioningly promoting narrative-enforcing material produced by the political NGO echo chamber upon which far too much of the BBC’s Middle East reporting relies.