On the afternoon of September 23rd a report about something which is not yet even in the pipeline appeared on the BBC News website’s ‘Middle East’ page.

Credited to the BBC Jerusalem bureau’s Yolande Knell, that report is headlined “Palestinian anger at possible UK Jerusalem embassy move” despite the fact that no such move is currently on the cards. 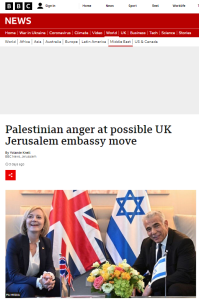 As reported by the Jewish Chronicle and others, the basis for this story is the new British prime minister’s statement of intent to review such a step.

“Her Downing Street spokesperson said she had reaffirmed her leadership campaign pledge to review the embassy’s location when she met Mr Lapid in New York last night during a visit to the UN General Assembly.”

Nevertheless, the opening lines of Knell’s report inaccurately portray a pending review as a “proposal” and uncritically tout the topic of “international law”:

“The Palestinians have called a proposal by the UK to move its embassy from Tel Aviv to Jerusalem a “blatant violation of international law”.”

The source of that unverified allegation concerning ‘international law’ becomes clear later on in the report when Knell extensively quotes a person she inaccurately portrays as “the Palestinian ambassador to the UK” (rather than the head of the Palestinian mission to the UK), despite the BBC having previously had to make corrections related to that point. 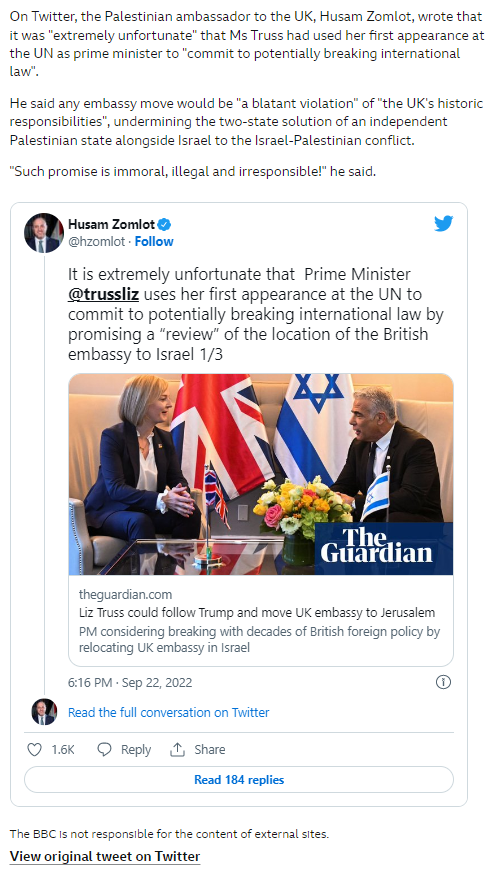 As we know from Husam Zomlot’s long record of BBC interviews, anything the Palestinian representative does not like is frequently portrayed as a breach of ‘international law’, regardless of whether or not that is actually the case. Knell however makes no effort to unpack his allegation for her readers but instead uncritically amplifies it.

“The status of Jerusalem is one of the thorniest issues in the decades-old Israel-Palestinian conflict.

Israel sees the entire city as its eternal, undivided capital while Palestinians claim the eastern part as the capital of their hoped-for future state.

East Jerusalem, along with the West Bank and Gaza Strip, were captured by Israel from Jordan and Egypt in the 1967 Middle East war and have since been viewed internationally as occupied Palestinian territory.”

As ever – including in the recycled filmed backgrounder presented at the bottom of this report – she makes no effort to clarify the status of Jerusalem under the terms of the League of Nations Mandate for Palestine or to explain that the parts of Jerusalem “captured by Israel from Jordan” were previously under illegal Jordanian occupation for 19 years.

She fails to make any mention of similar pledges from previous US presidential candidates or the 1995 Jerusalem Embassy Relocation Act and the related bi-annual presidential wavers.

“It also led to a flare-up in violence in which dozens of Palestinians were killed by Israeli forces.”

Knell refrains from informing her readers that pre-planned violent rioting instigated by Hamas and other terror factions in the Gaza Strip under the banner of the ‘Great Return March’ had been taking place for weeks before the US embassy in Jerusalem was opened in May 2018 and continued for months afterwards or that the majority of those “killed by Israeli forces” were affiliated with terrorist organisations.

Some paragraphs in Knell’s report indicate that the BBC is fully aware of the fact that what it presents as a “proposal” and a “possible UK Jerusalem embassy move” is currently in fact nothing more than supposition.

“Downing Street has not given any indication of timing but has confirmed that a review is under way.

British officials said they would not speculate on the outcome, adding that Ms Truss was aware of the sensitivity and importance of the location of the British embassy in Israel.”

Nevertheless, the BBC has obviously chosen to repeat the game plan it employed when the United States relocated its embassy, including partial portrayals of the status of Jerusalem, unevidenced allegations concerning ‘international law’ and uncritical amplification of hyperbolic Palestinian talking points – all of which contribute nothing to audience understanding of a topic which is not yet even a proper story.

MORE BBC PROMOTION OF PA MESSAGING ON US EMBASSY