On the afternoon of September 28th a report by David Gritten appeared on the BBC News website’s ‘Middle East’ page under the headline ‘Four Palestinians killed during Israeli raid in West Bank’. 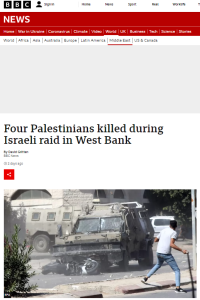 Like that headline, the report’s opening paragraph fails to clarify that the four gunmen killed were engaged in violence at the time and were linked to terrorist organisations:

“Four Palestinians have been killed and 44 wounded during a raid by Israeli forces in Jenin, in the occupied West Bank, Palestinian health officials say.”

As reported by the Times of Israel and others:

“A Border Police spokesman said in a statement that officers along with Israel Defense Forces soldiers sought to arrest Abd al-Rahman Hazem, the brother of a terrorist who carried out a deadly shooting attack in Tel Aviv earlier this year, and Muhammed Alownah.

The pair were responsible for a series of shooting attacks in recent months, including one that targeted a Defense Ministry engineering vehicle working along the northern West Bank security barrier earlier this month, the police spokesman said.

Israeli officials said the pair planned “more significant attacks in the near future.” […]

The third killed Palestinian was identified as Ahmed Alawneh, 24, a member of the Palestinian Authority security forces. He was killed as he was firing at Israeli troops in the area, according to footage published by Palestinian media outlets.

The fourth fatality was named as Muhammad Abu Na’asa.”

In paragraph four of Gritten’s report readers are told that “The Israeli military said its troops surrounded a house intending to arrest two men suspected of recent shootings” but not that those “two men” were among the “four Palestinians killed”.

Paragraphs ten and eleven of the report further demonstrate the absurdity of the BBC’s opening portrayals of armed men firing weapons who were later claimed by not one but two terrorist organisations merely as “Palestinians”.

“Two other Palestinian men were shot dead in clashes with the Israeli troops that erupted in the camp, according to the health ministry.

Reuters news agency reported that the militant groups Islamic Jihad and Al-Aqsa Martyrs’ Brigades said four of their gunmen were killed. One of them worked for the Palestinian Authority’s security services.”

“Witnesses said there was an [sic] blast and heavy gunfire after dozens of Israeli military vehicles entered Jenin.

“An explosive device detonated and the suspects opened fire toward the security forces,” it added.”

He does not however adequately clarify that the “explosive device” was detonated by the terrorists themselves in an attempt to evade capture.

In line with standard practice in recent BBC coverage of recent counter-terrorism operations in PA controlled areas, readers of this report are told that:

“Since January, more than 90 Palestinians, including militants and civilians, have been killed in the West Bank, mostly by Israeli security forces.”

Once again, however, the BBC refrains from clarifying that the majority of those killed were members of terrorist organisations or people engaged in violence at the time.

As we see, this report fails to provide BBC audiences with essential background information about the Palestinian Authority’s loss of control in Jenin and other locations. Like previous reports, it continues to avoid additional core issues including the rise in activity by Fatah’s Al Aqsa Martyrs Brigades, terrorism by members of the PA security forces and Hamas’ efforts to undermine the Palestinian Authority.

Those long-running omissions are particularly problematic given this report’s unqualified amplification of a statement from a “spokesman for Palestinian President Mahmoud Abbas”:

“A spokesman for Palestinian President Mahmoud Abbas said: “The Israeli occupation still underestimates the lives of our Palestinian people, and is tampering with security and stability by continuing its policy of escalation.””

The BBC’s uncritical promotion of that statement obviously does nothing to help audiences understand this particular story or its wider context.