In recent months we have repeatedly documented the BBC’s failure to provide its audiences with information which would enhance understanding of the multiple factors that have led to a rise in violence emanating from Palestinian Authority controlled areas in Judea & Samaria:

Concurrently, we continue to document the BBC News website’s highly selective coverage of terrorism against Israelis: 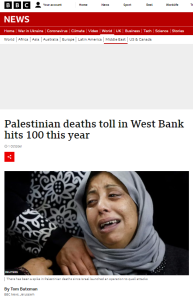 “At least 100 Palestinians have been killed in the occupied West Bank and East Jerusalem this year amid a massive increase in Israeli military raids, according to figures compiled by the BBC.”

That “massive increase in Israeli military raids” is of course the outcome of a rise in the number of terror attacks but that important context is only mentioned in the report’s tenth paragraph:

“In the spring, a spate of deadly attacks by Arab Israelis and Palestinians killed 16 Israelis and two foreigners, after which near nightly army raids have taken place in the West Bank as Israeli officials said they would aggressively counter a growing terrorism threat.”

In contrast to the impression given, terror attacks were not confined to the Spring months, but most previous and subsequent incidents have been ignored by the BBC.

In addition to those “figures compiled by the BBC”, Bateman’s report relies on claims from third parties misleadingly portrayed as “human rights groups”:

Our analysis of the Palestinian death toll draws on a range of sources including the BBC’s own on-the-ground coverage, regional media reporting and official statements cross-referenced with reports from non-governmental groups and UN agencies.”

“The human rights group Defence for Children International (DCI) Palestine has said the death toll indicates a “complete disregard for international norms” by the Israeli military.”

“Aseel AlBajeh, an advocacy officer with the Palestinian human rights group Al-Haq, describes the overall impact of Israel’s operation as “collective punishment on the entire region”, citing further restrictions on movement, the closure of military checkpoints to Israel, denial of work permits and detentions without trial that have accompanied it.”

Readers are told nothing of the UN Human Rights Council’s notorious anti-Israel bias or Michelle Bachelet’s own record on Israel. No background is provided regarding the quoted political NGOs portrayed as ‘human rights groups’; DCI-Palestine and Al Haq. The fact that both those NGOs have links to the PFLP terror organisation and are designated as terrorist organisations by Israel is concealed from readers and that omission is all the more egregious given that at least one of the Palestinian casualties that are the topic of Bateman’s report – Ayman Muhaisen – was a member of that particular terrorist group.

As was the case in his July report from Jenin (which is repromoted in this article), Bateman avoids providing BBC audiences with the full background information necessary to understand the rise in violence over the past year or so. Instead, readers find only veiled references to the context to that topic, together with unattributed allegations and avoidance of the words terrorists, terror and terrorism. [emphasis added]

“Their [Israeli counter-terrorism operations] pace has stoked fears of a much wider flare-up, with the Israeli military accused of routinely using excessive force and collective punishment, while security forces of the Western-backed Palestinian Authority (PA) have been losing their grip to armed groups whose firepower has grown to levels unmatched in years.

Israeli and Palestinian officials blame each other for the security collapse in the northern West Bank.” […]

“It came amid a collapse of security control by the PA, which has limited powers to govern Palestinian cities.

We saw the growth of weaponry in Jenin refugee camp, new formations of militants – many still just teenagers – and a rejection of the formal Palestinian leadership viewed as corrupt and unwilling to defend them.

Young gunmen backed by established armed groups have fused into the Jenin Brigade, while in Nablus militants patrolling the Ottoman-era alleyways of the Old City dub themselves the Den of Lions.”

Yet again readers find no meaningful information about the foreign funding for Palestinian terror, weapons smuggling, Hamas’ efforts to incite violence, the failure of the Palestinian Authority to meet its Oslo Accords obligations regarding terrorism or the uptick in involvement in terrorism by members of the PA security forces and Fatah’s Al Aqsa Martyrs Brigades.

Bateman’s rambling report includes references to several specific incidents, one of which – predictably, given the BBC’s extensive coverage of that topic – is the death of the Palestinian journalist Shireen Abu Akleh in Jenin. Once again Bateman amplifies unattributed allegations while promoting the canard of “misleading statements to the media” and claiming that the findings of the IDF investigation are ‘false’.

“Meanwhile, the IDF’s competence or willingness to investigate itself over fatal incidents has been increasingly subject to question this year.

After the killing in Jenin of the Palestinian-American journalist Shireen Abu Akleh, Israeli officials gave misleading statements to the media, before a final internal probe falsely suggested a soldier probably mistakenly shot her because he was being fired at by militants from her location at the time.”

Other examples of Bateman’s portrayals of specific incidents include those in the report’s second paragraph:

“The number [100] was reached as an 18-year-old man was shot dead in East Jerusalem on Saturday and after a week which saw Israeli forces reportedly firing an anti-tank missile at a house in Jenin that killed a wanted gunman and three others.”

Bateman refrains from informing readers that the “18-year-old man” concerned threw a petrol bomb at police officers dealing with a riot. Like the report to which he links, Bateman’s unevidenced claim about “an anti-tank missile” fails to clarify that an explosive device was detonated by the terrorists themselves in an attempt to evade capture.

“As human rights groups express mounting alarm, the figures show nearly a fifth of the Palestinians killed were children, the youngest of whom was 14.” […]

“The youngest Palestinian killed in the West Bank was 14-year-old Mohammad Salah, shot by soldiers in late February close to Israel’s separation barrier south of Bethlehem.

The IDF alleged he threw petrol bombs on to a road but didn’t say why it used lethal force to stop this. His family say he wasn’t close to the road when he was shot dead.”

A 14-year-old named Muhammad Shahada Salah from al Khader near Bethlehem was killed on February 22nd while throwing Molotov cocktails at passing cars (rather than “on to a road”). The ITIC noted (entry 7) that “A military-type funeral was held for him and he was wrapped for burial in a Palestinian flag”.

“According to the figures, 19 Palestinian children have been killed in the West Bank this year.

Most of the under-18s were shot dead by Israeli soldiers during military search-and-arrest raids or anti-occupation protests.

One boy was killed while carrying out an alleged hammer attack on a soldier.”

That “boy” was seventeen years old and the attack he carried out in September was not “alleged”: it caused head injuries to a member of the security forces.

“The human rights group Defence for Children International (DCI) Palestine has said the death toll indicates a “complete disregard for international norms” by the Israeli military.

In July, 16-year-old Amjad Nasr was shot dead in the village of Al Mughayyir, where tensions frequently erupt as Israeli settlers have targeted nearby land to build illegal outposts.”

Bateman devotes a further seven paragraphs to that incident, including an interview with the youth’s father. The ITIC reported that incident as follows: 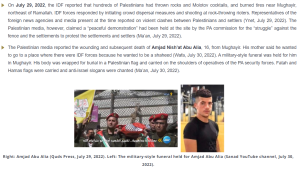 Bateman’s claim that 19 of those killed were children – i.e. people under the age of 18 – does not tell the whole story by any means. The ITIC’s report on Palestinians killed between January 1st 2022 and July 7th 2022 during IDF counter-terrorism operations includes eleven people under 18, some of whom were linked to terrorist groups: 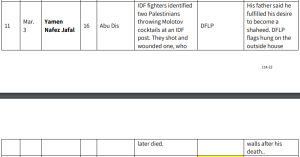 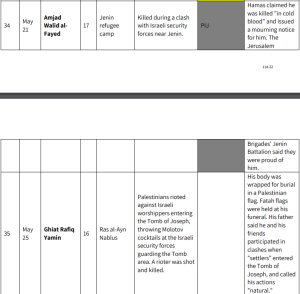 Subsequent weekly reports published by the ITIC up until the publication of Bateman’s article include a further six people under the age of 18 (including the above Amjad Abu Alia), all of whom were involved in violent activity and most of whom were claimed by terrorist organisations. 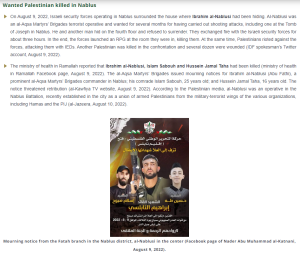 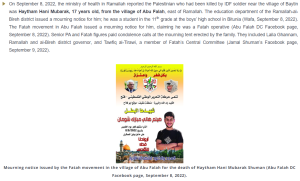 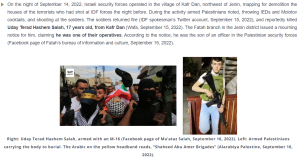 This is not the first time this year that the BBC has amplified a specific narrative concerning minors. In March listeners to BBC World Service radio heard similar framing:

It is entirely obvious that Tom Bateman has self-conscripted to a narrative concerning ‘child casualties’ promoted by designated political NGOs belonging to the PFLP terrorist organisation. The aim of that narrative is portrayed in Bateman’s closing paragraphs:

“Human rights groups say they will seek to add many of this year’s cases to a current investigation by the International Criminal Court into possible war crimes by Israel and Palestinian armed groups.

In August, 49 Palestinians were also killed in the Gaza Strip during a military escalation between Israel and Islamic Jihad.”

Unsurprisingly, Bateman refrains from informing readers that eleven of those 49 people were killed by shortfall rockets fired by a Palestinian terrorist organisation and that 52% of the others were terrorist operatives.

Bateman’s uncritical amplification of the partisan and politically motivated narrative intended to delegitimise Israel which is advanced by NGOs he knows are designated clearly does not adequately inform BBC audiences and falls far short of supposed BBC editorial standards of accuracy and impartiality.

Nevertheless, the BBC continues to avoid any serious reporting on the issue of the background to the rise in terrorism in PA controlled areas, including the topic of the exploitation of minors for the purposes of terrorism and violence.

BBC NEWS CONTINUES TO SKIRT THE BACKGROUND TO EVENTS IN JENIN

OMISSIONS IN BBC REPORT ON INCIDENT IN JENIN