On October 7th a report by the BBC Jerusalem bureau’s Tom Bateman was published on the BBC News website’s ‘Middle East’ page under the headline “UK apology sought for British war crimes in Palestine”.

On the same day a filmed version of the report was shown on the BBC Two programme ‘Newsnight’ (available in the UK on BBC iPlayer here and also on YouTube here).

On October 15th a longer filmed version was aired on the BBC World News TV channel under the title “Palestine: Britain’s Colonial Crimes”. 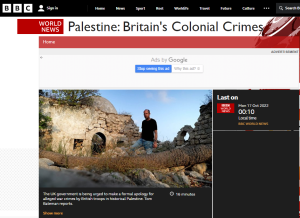 “The UK government is being urged to make a formal apology for alleged war crimes by British troops in historical Palestine. A petition, along with 300 pages of evidence, has been brought by an elderly Palestinian, a former politician who was shot and wounded by UK forces as a boy. A BBC review of the historical material involved details allegations of reprisal killings, torture, and home demolitions as collective punishment by British forces from 1917 to 1948. Tom Bateman reports.”

The various versions of the report were heavily promoted by Bateman on social media.

In the written report – i.e. the version which will remain online as ‘permanent public record’ – the instigator of the petition is described as follows:

“It is being brought by Munib al-Masri, 88, a well-known Palestinian business owner and former politician, who was shot and wounded by British troops as a boy in 1944.

“[Britain’s role] affected me a lot because I saw how people were harassed… we had no protection whatsoever and nobody to defend us,” Mr al-Masri told the BBC at his home in Nablus in the occupied West Bank.”

Readers are not given any further information about al-Masri’s political leanings and are not informed that two years ago he and others filed a lawsuit against the British government in which it was claimed that “the suffering of the Palestinians” stems from the 1917 Balfour Declaration.

Bateman’s reports are primarily based on claims from people who were either not born or were children at the time regarding incidents in two locations. The context provided is severely lacking and does not include proper explanation of the Arab Revolt which took place between 1936-1939:

“It was the autumn of 1938 and UK forces were facing a rebellion in Palestine, under British control after the defeat two decades earlier of the Ottoman Empire.” […]

“A Palestinian insurgency – known as the Arab Rebellion – broke out from 1936, and London flooded the country with troops.”

Wider historical context is also absent, with no mention made, for example, of the 1922 League of Nations Mandate for Palestine or the levels of unrestricted Arab immigration to the region following the entrusting of that mandate to Great Britain:

“Britain’s control of Palestine began during World War One when its imperial forces drove out Ottoman Turkish troops. In 1917, Foreign Secretary Arthur Balfour pledged to the Zionist movement to establish a Jewish national home in what became known as the Balfour Declaration.

The UK was given a mandate to govern, allowing levels of Jewish immigration and land acquisition to rise, fuelling growing tensions with Palestinian Arabs that frequently broke out into violence.”

Bateman’s description of British restrictions on Jewish immigration throughout the mandate period is inadequate: 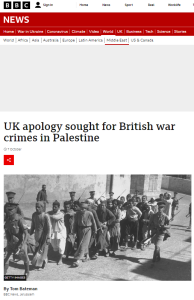 “The period saw Britain turn back ships of survivors of the Nazi Holocaust who were attempting to get to Palestine.”

The report includes quotes from an academic whose related book appears to have made an impression upon Bateman:

“Britain’s atrocities carried out in Palestine were “violent and sensational” but “exceptional”, according to the military historian Prof Matthew Hughes, who says its tactics did not routinely reach the levels of brutality meted out in some other colonies.

Instead, he says, Britain introduced a system of “daily pacification” that was “much more fundamental, cumulative and attritional in wearing down the Palestinians”, citing measures including restrictions on movement, curfews, seizure of property or crops as punitive measures, arbitrary detention and using forced labour to build roads and military bases.

“The whole country became something of a prison,” says Prof Hughes, author of Britain’s Pacification of Palestine.

He also says the UK’s military guidelines allowed troops to carry out “collective punishments” – often involving home demolitions – as well as “retribution” and the shooting of rioters, while it was also commonplace to shoot suspects who were running away.”

In papers published before that book, Hughes expanded on that latter topic:

“In the case of Palestine, the military rule imposed by Britain in 1917 was lifted in 1920 with the establishment in the country of a civil government, but collective punishment was explicitly permitted under the Ordinances and Orders in Council introduced in Palestine by the Mandate authorities in 1922 and regularly updated thereafter. Indeed, a “Collective Responsibility for Crime Ordinance” dates back to 1921. The British used these local laws when implementing collective punishments on Palestinians and villages, referring to them after April 1936 as “emergency” laws.”

“International conventions laying out rules of war, notably those at Geneva (1864, 1906 and 1929; superseded by the Geneva conventions of 1949) and the Hague (1899 and 1907; also the Draft Rules on Air War of 1923) also constrained British forces in Palestine. While the fourth convention of the 1949 Geneva conventions dealt specifically with the protection of civilians, the international laws in place in 1936 dealt with the conduct of war and the treatment of prisoners-of-war (POWs) rather than the maltreatment of civilians. Britain classified the Arab revolt as an internal insurrection and not an international war and so denied POW status to Arab fighters. Thus it treated captured Arab guerrillas as civilian criminals subject to the ordinary civil law modified by any conditions of martial law, such as the death penalty for carrying ammunition or a firearm, and for whom international law did not apply.”

The sole veiled reference to British forces’ actions against Jews during the same period comes in the report’s closing paragraphs:

“The Mandate period saw the UK ultimately use “rather nasty methods of control” over both Jews and Arabs, says the Israeli historian Tom Segev, author of One Palestine, Complete.”

“The request for an apology is likely to reopen the debate over delivering modern-day accountability for colonial-era crimes, while also being viewed in the context of the ongoing Israeli-Palestinian conflict.”

In his closing sentences he appears to expand on that latter claim:

“…Mr al-Masri seeks to argue that the ensuing conflict left the Palestinians entirely vulnerable, as the newly created State of Israel adopted some of the emergency powers left by the British.

“Britain should see the ways and means to compensate… [to] be brave and say: ‘Sorry I did this’,” he says.” 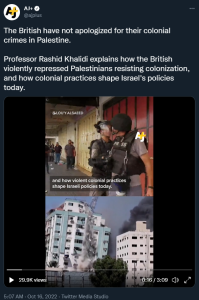 While opinions may vary regarding al-Masri’s latest “request for an apology” (and, apparently, reparations) from Britain, it is also important to note that the topic so heavily promoted by the BBC in these reports by Bateman has been used by anti-Israel activists such as Joseph Massad and Rashid Khalidi (with the help of Al Jazeera) for politically motivated delegitimisation of Israel.

That fact in itself should have prompted the BBC to take all the more care to provide adequate factual and historical context to its promotion of Palestinian claims.