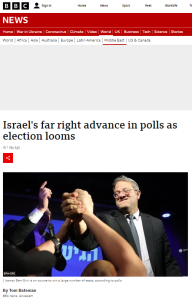 The BBC News website published a total of six reports relating to the election: 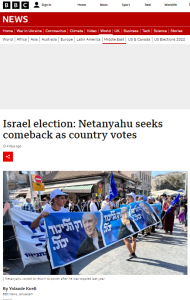 By way of comparison, in 2013 the BBC News website published thirty-four reports about the election and ahead of the first election in 2019, fifteen articles were published before voting even began.

As can be understood from those headlines and the accompanying chosen images, BBC coverage of the 2022 election overwhelmingly focused audience attentions on just two contenders: Binyamin Netanyahu and Itamar Ben Gvir. 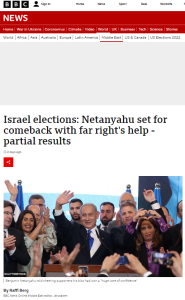 Audiences were not provided with any information about the vast majority of the thirty-nine lists running in the election and their platforms. Issues of interest to Israeli voters such as the cost of living, housing and crime within Israeli-Arab communities were completely ignored by the BBC’s journalists, who also failed to provide the corporation’s world-wide audience with any information about how the Israeli electoral system works.

The November 3rd report about the final results of the election did not inform readers that the Meretz party and the Balad party failed to cross the electoral threshold.

Most of the BBC’s six reports include links to or quotes from outside contributors (Israel Democracy Institute, Hebrew University, a pollster) and/or from journalists (Axios, Jerusalem Post, Walla!, +972 Magazine, Ha’aretz).

In the two reports by Yolande Knell readers find heavily veiled references to the ongoing wave of Palestinian terrorism without any serious analysis of how that may have influenced voting patterns: 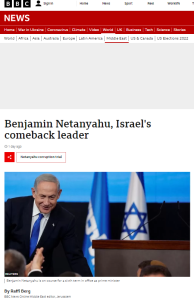 “As with the previous four inconclusive elections, this looks like a referendum on Mr Netanyahu rather than a vote on Israel’s top security and diplomacy issues, notably Iran’s nuclear ambitions and the conflict with the Palestinians.

That is despite an increase in deadly violence in the occupied West Bank ahead of election day.”

“His [Lapid’s] tenure also saw the deadliest year for Israelis and Palestinians since 2015, amid an upsurge in violence. Yet his government continued to pay little attention to ways of solving the Israel-Palestinian conflict.”

Notably, none of the BBC’s reports make any reference to the May 2021 rioting in Israeli cities such as Acco and Lod and the later violence in parts of the Negev which some observers think also influenced voters in this election.

As has been the case in previous years, BBC coverage of Israel’s latest election once again failed to provide audiences with a broad perspective, thereby hampering their ability to fully comprehend the story.