On November 17th the BBC News website published a report by the BBC Jerusalem bureau’s Yolande Knell about a topic which is currently not relevant.

As may be understood from its headline – ‘Israel PM-elect Netanyahu’s deal plans to bolster settlements’ – the article relates to “plans” reportedly agreed between participants in talks to establish an as yet none-existent coalition between parties including a politician who has not yet formed a government and is not yet prime minister. The report’s opening lines state: 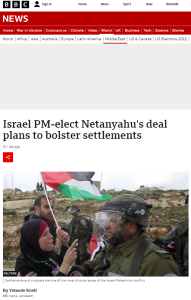 “A deal between Israel’s prime minister-elect and his far-right partner reveals the likely next government’s highly controversial plans for settlements.

It includes moves to legalise dozens of outposts in the occupied West Bank.”

It goes on to say: [emphasis added]

“If the plan becomes policy, it will set Israel on collision course with the Palestinians and its foreign allies.”

Knell does not however adequately clarify to readers that – as noted by the Times of Israel in a report on the same topic – any such plans would need the approval of Israel’s parliament:

“Even if such promises are ultimately entered into the coalition agreements, there is no guarantee they would manage to pass in the Knesset.”

“It [the reported agreement] says they also decided to create Jewish religious seminaries in two evacuated outposts – Evyatar and Homesh.”

Readers are not told that the community of Homesh was evacuated by the Israeli government in August 2005 within the framework of the disengagement plan from the Gaza Strip and four communities in northern Samaria. Any plans relating to Homesh would therefore entail making changes to the 2005 Disengagement Plan Implementation Law , which of course would also need to be approved by the Knesset.

‘”We don’t care what was agreed, the people of our town will resist the settlers’ presence,” Dr Hutifa Badir from Beita, a village near Nablus and by the Evyatar outpost, told the BBC.

“We arm ourselves with the blood of martyrs and the wounded. We’re committed to our land, and we will not give up on it whatever the cost.”’

Knell’s report includes several examples of permanent features in any BBC report relating to the topic of ‘settlements’. Readers are provided with a version of a much-used partisan map sourced from the foreign funded political NGO B’tselem which is frequently seen in BBC coverage and which, inter alia, portrays the Jewish Quarter of the Old City of Jerusalem as a ‘settlement’.

As ever, the long-standing partial BBC mantra concerning ‘international law’ is promoted:

“Jewish settlements are widely seen by the international community as illegal, but Israel disagrees.”

Equally predictably, Knell employs the usual BBC tactic of erasing the illegal Jordanian occupation of Judea & Samaria and parts of Jerusalem from the story:

“…the West Bank, which Israel has occupied since the 1967 Middle East War.”

So why did Yolande Knell bother to write an entire report about currently unauthorised proposals reportedly agreed between parties which as yet have not formed a government? The answer to that comes in her platforming of Palestinian reactions to the story:

“The Palestinian foreign ministry called on the international community and Washington in particular, to take the needed steps to ensure the agreement was not implemented.

It stated that it would lead to the “entrenchment and expansion of settlements”.

The ministry added the deal was another blow for the hopes of any future return to peace talks with Israel, and the two-state solution – the internationally approved formula for peace to end the Israel-Palestinian conflict.”

Once again it is obvious that the purpose of a ‘news’ report produced by the BBC’s Jerusalem bureau is to provide worldwide amplification for Palestinian talking points issued on the same day as this report was published.