On the afternoon of Friday, November 18th the BBC News website published a report by the BBC Jerusalem bureau’s Tom Bateman on its ‘Middle East’ page. The headline chosen for that report reads “Autistic Palestinian teen’s killing casts spotlight on Israel tactics”. 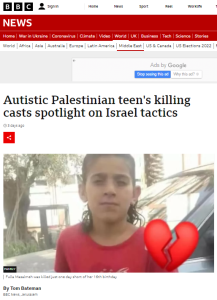 Seeing as the word ‘tactics’ means “the art and science of the detailed direction and control of movement or manoeuvre of forces in battle to achieve an aim or task”, readers could be forgiven for concluding that Bateman is telling them that Israel has a strategy for killing autistic teenagers.

The circumstances of the November 14th early morning incident which Bateman uses as a hook for his latest report are currently still under investigation.

As reported by the ITIC:

“…IDF forces operated in Bitunia (west of Ramallah) to detain a Palestinian involved in terrorist activity. During the operation they identified a suspicious vehicle approaching them. They signalled the driver to halt, but instead of stopping he accelerated and drove towards them. In response the forces shot at the vehicle.”

Bateman is able to inform readers that – as also reported by other media outlets and agencies – the fifteen-year-old girl was travelling for reasons unknown in a car with a 26-year-old male driver who was under the influence of alcohol at around 03:30 in the morning.

“A day earlier, Fulla was killed by Israeli soldiers who fired multiple shots at the car she was in.

The army said the vehicle, driven by a 26-year-old Palestinian man, did not heed calls to stop and sped towards them – an account rejected by eyewitnesses and Fulla’s family. The army later said the driver was found to be drunk.” […]

“It is not clear how Fulla came to be with the man driving the car that she was killed in. Her family says he was giving her a lift home in the early hours of Monday morning.

It is a part of the story locals are reticent to speak about, given social taboos around the possibility of an exploitative or unsanctioned relationship and the use of alcohol.”

Nevertheless, Bateman repeats his unexplained ‘spotlight’ claim in the body of the report:

“The case has thrown a fresh spotlight on Israel’s use of lethal force in what the United Nations (UN) says is the deadliest year for Palestinians in the occupied West Bank since 2005, following a series of deadly Palestinian attacks against Israelis.”

No context is provided to readers on the obviously relevant topic of vehicular terror attacks, six of which took place in September and October 2022 alone.

Under the sub-heading “Mounting toll”, Bateman returns to a topic he has already written about twice since the beginning of October and links to one of those reports.

“This year, more than 130 Palestinians have been killed in the occupied West Bank and East Jerusalem. The highest proportion have been militant gunmen shot dead by Israeli forces, often in gun battles during arrest raids.

Other fatalities include teenagers shot after reportedly throwing stones or petrol bombs, unarmed civilians and bystanders, anti-settlement protesters, and individuals shot while carrying out attacks including stabbings and car rammings.

Israeli military search and arrest raids have taken place nearly every night in the occupied territories, following a wave of armed violence by Palestinians targeting Israelis. These attacks have killed more than 25 people since March, making this year the deadliest for Israelis since 2015.” [emphasis added]

In fact, twenty-seven people have been killed in Palestinian terror attacks since the beginning of the year, including two Ukrainian nationals murdered in Bnei Brak in March.

As was the case in his October 1st report, Bateman uncritically amplifies talking points provided by the political NGO DCI-Palestine while once again failing to inform BBC audiences that it is linked to the PFLP terrorist organisation and therefore designated by Israel. Instead, Bateman chooses to portray that organisation to BBC audiences simply as a “human rights group”.

“According to the human rights group Defence for Children International (DCI) Palestine, Fulla Masalmeh’s case highlights the absence of any proper accountability system for Palestinians under Israeli military occupation.

“This is the atmosphere that Palestinian children live in,” says the group’s director, Khaled Quzmar. “According to our documentation, there was no risk from this girl and the car she was in… there was no right for them to target it.””

Coincidentally or not, on the day of the appearance of Bateman’s report DCI-Palestine and partners ran an exhibition in the Belgian parliament and two days later the NGO initiated a context-free Twitter campaign which erases Palestinian terrorism and violence in an effort to promote the narrative of “a deadly year for Palestinian children”.

This latest article by Tom Bateman clearly does not provide BBC audiences with any accurate or impartial information concerning “Israel tactics” and once again he avoids any serious coverage of the background to the rise in terrorism in PA controlled areas which has necessitated Israeli counter-terrorism operations.

This report is, however, yet another example of Bateman’s self-conscription to the amplification of a partisan narrative employed by political NGOs he selectively portrays as ‘human rights groups’, with the aim of delegitimising Israel as a country which uses “tactics” to kill children.

LOOKING BEHIND BBC REPORTING ON THE DEATHS OF PALESTINIAN TEENS