The first BBC News website reporting on the terror attacks in Jerusalem on the morning of November 23rd appeared some two hours after the second incident and included a phrase also heard in early BBC radio coverage of the same events. 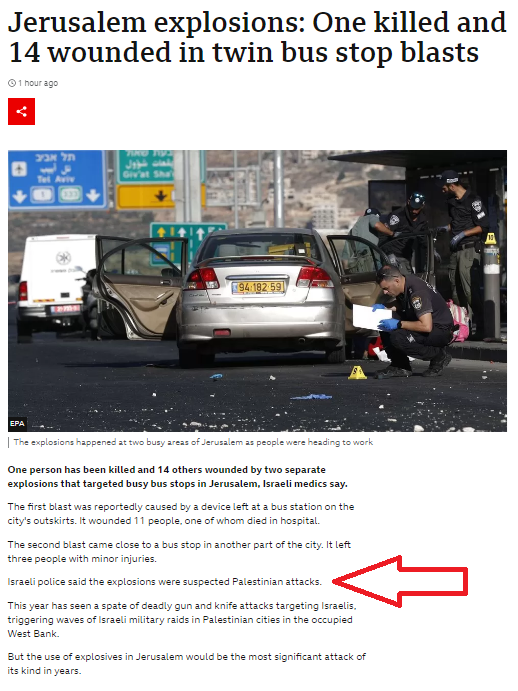 Over the next nine and a half hours that report was updated four times with subsequent versions written by David Gritten and the final version credited to Gritten and the BBC Jerusalem bureau’s Tom Bateman.

The teenage victim of the attack was named in the third version of the report.

The final version of the report – which will remain available online as ‘permanent public record’ – is titled ‘Jerusalem bombings: Teenager killed in rare twin attacks at bus stops’ and it opens with presentation of a lower number of people injured (one of whom was in critical condition and has since died) than was reported by the local media and entirely superfluous use of the word “suspected”. [emphasis added] 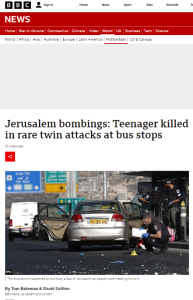 “A 15-year-old boy has been killed and 14 other people have been wounded in two suspected bomb attacks at bus stops in Jerusalem, Israeli police say.

The explosions happened at two busy areas on the outskirts of the city as people were heading to work.

The teenager who died was an Israeli-Canadian Jewish seminary student named Aryeh Schupak.”

Adhering to standard BBC practice, the report uses the euphemism “militant” to describe some of the terrorist organisations that lauded the attack:

“No group has so far said it was behind the blasts. However, the Palestinian militant groups Hamas and Islamic Jihad both praised the perpetrators of what they referred to as the “operation”.”

Four paragraphs of the report promote redundant linkage between the terror attack and the unrelated topic of post-election coalition talks:

“The attacks come as Prime Minister-designate Benjamin Netanyahu and his Likud party continue negotiations to form a new coalition government with allied far-right and religious parties. They won a majority in parliament in an election that centred on security.”

As in the initial radio reports, this article fails to provide any explanation of the factors behind the rise in the number of terror attacks which, at the time it was written, had resulted in the deaths of twenty-eight people this year. It similarly refrains from clarifying that “military search and arrest raids” are in fact counter-terrorism operations in response to attacks and planned attacks and that a high proportion of the “more than 130 Palestinians” killed were terrorists and/or people engaged in violent rioting against Israeli forces at the time.

“This year has seen a spate of deadly attacks by Palestinians targeting Israelis, killing at least 25 people.

Meanwhile, Israel has carried out near nightly military search and arrest raids in the occupied West Bank. More than 130 Palestinians – including militant gunmen and civilians – have been killed.”

The Israeli military said its troops fired at “armed suspects” during an operation “to secure the entrance of Israeli civilians to Joseph’s Tomb”. The tomb is revered by Jews, who believe the Biblical figure Joseph is buried there.”

BBC audiences are not informed that under the terms of the Oslo Accords, freedom of access to and worship at that site and others is supposedly guaranteed or that the type of violent clashes during which Shehada was killed are a regular occurrence.

The final three paragraphs of the report relate to a different story which did not receive any coverage in its own right from the BBC. Readers are provided with a link which will be useless to most given that it leads to a paywalled article.

“In a separate incident on Tuesday in the nearby city of Jenin, Palestinian gunmen kidnapped the body of a 17-year-old Israeli Druze boy who was fatally injured in a traffic accident near Jenin, his family said.

The uncle of Tiran Fero told the Haaretz newspaper that he was at Jenin’s Ibn Sina Hospital with his nephew when a group of men “fired their weapons in the air and yelled in Arabic”, then “disconnected him from the life support machines and threw him into a vehicle”.

“If Tiran’s body is not returned, the kidnappers will pay a heavy price,” Mr Lapid warned on Wednesday.”

The BBC did not bother to update its report the following day to include subsequent developments in that story.

In line with BBC editorial policy (“We should not use the term ‘terrorist’ without attribution”), the sole mentions of the words terror, terrorists and terrorist in this report come in quoted statements:

“He [PM Yair Lapid] also pledged that security forces would “find these heinous terrorists, those behind them and those who provided them with weapons”.” […]

“”We still have a fight with cruel terror, which raise its head again,” Mr Netanyahu warned as he visited survivors of the attacks in hospital.” […]

“Canadian Prime Minister Justin Trudeau tweeted that he was “incredibly saddened to learn about the death of a young Canadian in the terrorist attack in Jerusalem”, which he condemned “in the strongest possible terms”.

The US ambassador to Israel, Tom Nides, tweeted that an 18-year-old Israeli-American named Naomi Pilichowski was among those wounded in what he called the “heinous terrorist attack”.”

An earlier version of the BBC’s report included a similar statement from the British Ambassador to Israel.

Nevertheless, although many countries – including the UK, Canada, the US, Turkey, the UAE, Bahrain, Bulgaria and Georgia – issued statements rightly describing the bombings in Jerusalem as terrorism, the BBC continues to employ its long selectively applied policy of refusing to call attacks against civilians in Israel terrorism while having no qualms about using that term in relation to similar attacks in the UK.