The Israel Security Agency’s report on terror attacks during November 2022 shows that throughout the month a total of 196 incidents took place: 158 in Judea & Samaria, 35 in Jerusalem and inside the ‘green line’ and three in the Gaza Strip sector.

On November 2nd a member of the security forces was seriously injured in a vehicular attack which did not receive any BBC News website coverage. On November 3rd three members of the police force were wounded in a stabbing attack in Jerusalem’s Old City. That incident was briefly mentioned late in a report on the Israeli general election but the number of wounded was inaccurately presented as one:

“…the Israeli police said an officer was stabbed and wounded by a Palestinian man in occupied East Jerusalem. The Palestinian was shot dead by officers at the scene.”

In the same election report readers were told that:

“Later, air raid sirens sounded in southern Israel after Palestinian militants in the Gaza Strip fired three rockets towards Israel, the Israeli military said. The launches failed and the rockets exploded inside Gaza, it added.”

In fact, four rockets were fired and while three did indeed fall short in the Gaza Strip, one was intercepted over Israeli territory.

Three civilians were murdered and four injured in a terror attack in Ariel on November 15th. The BBC news website reported that attack without identifying the victims, without mentioning the wounded and without using the word terror.

“…co-ordinated bomb attacks at bus stops on the outskirts of Jerusalem killed a 15-year-old Israeli-Canadian boy and a 50-year-old Israeli man. Thirteen other people were wounded.”

On November 24th a youth was injured in a vehicular attack in Be’er Sheva which was not reported by the BBC.

On November 29th a member of the security forces was seriously injured in a vehicular attack near Migron/Kochav Ya’akov. That incident was mentioned in a BBC report headlined ‘Five Palestinian men killed in West Bank violence’.

The death on November 8th of the victim of a stabbing attack which had taken place in October was not covered on the BBC News website.

In the first eleven months of 2022 the BBC News website reported 0.7% of the terror attacks against Israelis which actually took place (not including the rocket fire during Operation Breaking Dawn in August) and 73% of the fatalities resulting from those attacks. 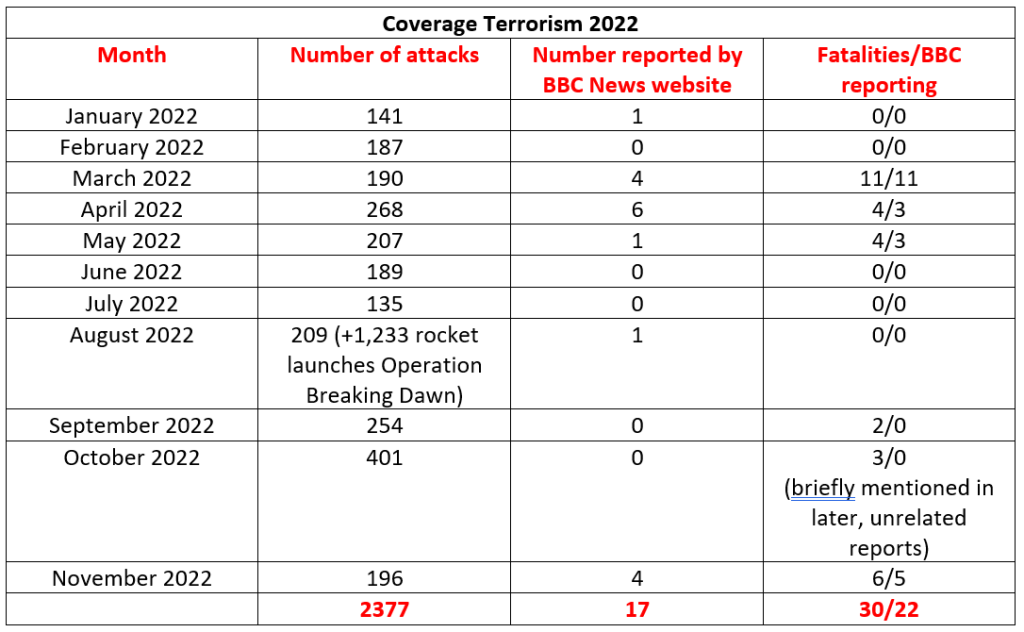