The articles, “Harvard blocks role for former Human Rights Watch head over Israel criticism“, Jan. 6, and “Harvard Kennedy School condemned for denying fellowship to Israel critic“, Jan. 8, were largely based on a report in the far-left US magazine The Nation, alleging that he school’s dean, Douglas Elmendorf, vetoed the move due to Roth’s and HRW’s “anti-Israel bias”.

The allegation that Roth’s fellowship was derailed because of his bias against Israel was made by Kathryn Sikkink, a professor of human rights at the Kennedy School.  Sikkink, in the Nation piece, attempted to refute charges that HRW is disproportionately critical of Israel by absurdly claiming that the Jewish state’s human rights record is on par with “Angola, Colombia, Turkey, and Zimbabwe”, and thus is deserving of such opprobrium.

So, while it may ultimately be true that Roth’s fellowship was denied due to his obsession with Israel, Sikkink is hardly an objective source.  Though Roth also told the Guardian that “he now believes Elmendorf bowed to pressure from donors who are strong supporters of Israel”, again, no evidence was offered to back up his claim.

McGreal, again citing the report in The Nation, floats some prominent Jewish, pro-Israel donors to Harvard, suggesting their possible influence over the decision:

The school has received tens of millions of dollars from supporters of Israel such as the billionaire Les Wexner, who, the Nation said, was instrumental in bringing members of Israel’s military and intelligence services to study there.

Another major donor, Robert Belfer, is also closely involved with the Anti-Defamation League and the American Jewish Committee, which have sought to discredit human rights groups over their criticism of Israel. Belfer is a member of the dean’s executive board of major donors who advise Elmendorf.

However, McGreal fails to explain how, if the pro-Israel Jewish donors are so powerful at Harvard, Stephen Walt, known for the antisemitic conspiracy book on the ‘Israel lobby’ he co-authored, has managed to keep his position as Robert and Renée Belfer Professor of International Affairs at the Harvard Kennedy School.

McGreal also egregiously plays down the criticism of HRW and Roth.  It isn’t merely HRW’s “criticism of Israel”, but their documented malign obsession with the state, including their false charge of apartheid, as well as tweets by Roth promoting antisemitic tropes.

Here’s a retweet by Roth in 2014 Roth which included the tagline “‘Never again’ must mean NEVER AGAIN FOR ANYONE!”, and which evokes an analogy between Israel and Nazi Germany – deemed antisemitic per the IHRA Working Definition. 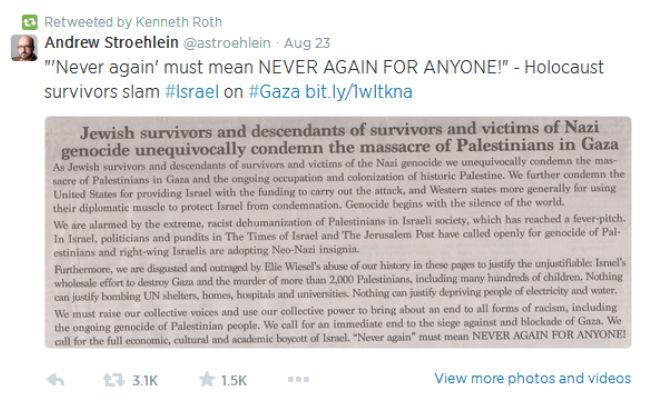 That same year, he tweeted the suggestion that Israeli behavior in Gaza was the cause of the dangerous uptick in antisemitic attacks in Germany – thus blaming the actions of Jews for antisemitism.

Here he is in 2016 defending Jeremy Corbyn from ‘false’ charges of antisemitism – showing sympathy for the disgraced former Labour leader, sympathy which is evidently shared by McGreal himself. 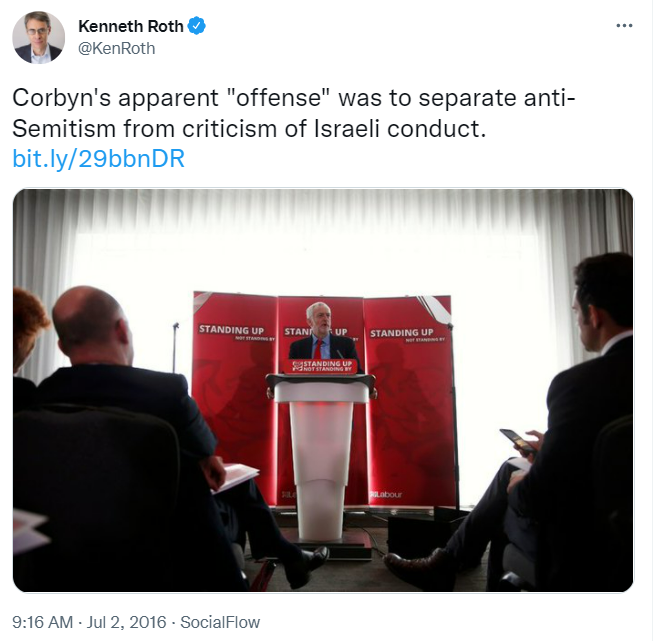 In 2021, he made another toxic Nazi analogy.

McGreal’s efforts to paint critics of Roth and HRW in the most negative possible light, regardless of the facts, is also on display in this passage from his Jan. 8th article:

Even a cursory glance at NGOM’s site makes it clear that their focus is on often wealthy NGOs which, under the facade of “human rights”, incite and campaign against the Jewish state’s fundamental right to exist – some of whom support, or are even affiliated with, proscribed terror groups.

The Guardian journalist’s disregard for facts is also evident in this paragraph, which refers to something which occurred in 2011:

Other major universities have also snubbed critics of Israel including the board of the City University of New York, which blocked an award to the award-winning Jewish playwright Tony Kushner after he was accused of being anti-Israel.

In fact, though some raised objections to the decision to award Kushner an honorary degree, it was not successfully blocked – and he did, in the end, receive it.

Though there are reasonable (academic freedom) grounds to be critical of Harvard’s putative decision to rescind Roth’s fellowship based on his extreme views, there is no justification for journalists to act as advocates on behalf of the former HRW director by erasing or intentionally obfuscating all the facts which interfere with the desired narrative.