The Guardian Israel hate page this morning – as my dear friend MargieinTelAviv affectionately calls it – features a veritable choice of Israel-bashing articles to sink one’s teeth into. 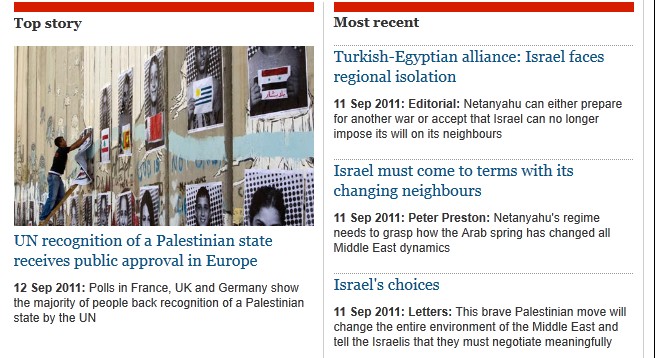 First, there’s an article by Peter Preston, former Guardian editor, which contains a breathtaking insight into the malice with which he views Israel.

As for Egypt itself, transition seems a puny word. Goodbye to Mubarak, and decades of autocracy; hello to dawning democracy, to millions on the streets, to outbursts of mass anger that, these past few days, can see Israel’s embassy while soldiers struggle for control. Maybe democracy and violent protest aren’t obvious bedfellows, but this time there is a connection – because now the crowd can come out spontaneously to make its feelings clear.[emphasis added]

Lets unpack this last sentence for a second. Preston seems to be drawing together two somewhat disparate themes: democracy and violence; the suggestion being that the freedoms associated with democracy have allowed the “Egyptian street” to express their true feelings toward Israel. However, the idea of democracy is not about unleashing the inner animal so that anarchy reins – but allowing freedom of expression to flourish within the confines of the rule of law. What Preston does through a rhetorical play on words is contextualize and justify violence against Israelis in the name of democracy.

If that’s not enough, Preston then goes on to upbraid Israel for its stubborn refusal to commit suicide by refusing to recognize the Palestinian unilateral declaration of statehood expected to take place at the UN later this month.

Israel ought to be voting to recognise a Palestinian state too this week, coming to terms with change before change engulfs it. But is there any sign of such awareness in the bunkers of entrenched obliviousness? An Arab spring? Fear, rather, an Israeli winter.

The theme of unilateral declaration of statehood is then picked up by the perfidious Gerald Kaufman. Under the heading “Israel’s Choices” in the letters page, Israel is presented with one choice.

President Abbas is to be congratulated on persisting in applying for Palestinian statehood at the UN (Report, 9 September), despite all the pressure and blackmail trying to force him not to. The quartet has never done anything meaningful to give the Palestinians their independence. If the US uses its veto at the security council, this will prove the smug windbag Obama to be the puppet of Aipac. The hypocrisy of those countries which vote against or abstain at the general assembly will similarly be exposed. This brave Palestinian move will change the entire environment of the Middle East and tell the Israelis that they must negotiate meaningfully if they wish to be one of the states in a two-state solution.
Gerald Kaufman MP
Lab, Manchester Gorton

[Note how for good measure Kaufman breezily employs the rhetoric more commonly associated with Jewish conspiracy theorists Walt and Mearsheimer by stating that US support of Israel in the United Nations is the work of the US puppet master, AIPAC.]

Not to be outdone by Preston and Kaufman, Jerusalem correspondent, Harriet Sherwood adds her own two cents by posting an article suggesting that there is widespread approval for the support of a unilateral declaration of a Palestinian state in Europe.

The majority of people in the UK, France and Germany want their governments to vote in favour of recognising a Palestinian state if a resolution is brought before the United Nations in the next few weeks, according to an opinion poll.

The basis for such a claim, we learn, is a poll conducted by YouGov on behalf of Avaaz.

The poll was conducted by YouGov on behalf of Avaaz, a global campaigning organisation that is conducting an online petition in support of a Palestinian state. It is planning to deliver more than 913,000 signatories backing what it describes as “this new opportunity for freedom” to the European parliament.

We do not know what questions were asked in this poll – all we are told is, by way of footnote, that the poll was conducted online with 2,552 respondents in the UK, 1,017 respondents in Germany and 1,011 in France. However if the track record of Avaaz polling is anything to go by, the results are not to be trusted.

And Avaaz has an even more checkered background as Daniel Greenfield observes,

Avaaz [is] a left-wing organization conducting a pressure campaign for Palestinian statehood. Avaaz’s video lays the blame for the violence on Israel, compares Israel’s Foreign Minister to Ahmadinejad and presents the unilateral Hamas-Fatah state as a way to bring peace to the region. Viewers are not told that few things are more certain to bring violence than unilateral actions by a fanatical terrorist group whose covenant celebrates the genocide of the Jewish people.

Like its video, Avaaz is not what it seems. Unlike most organizations, Avaaz does not list its staff openly; instead it claims to practice “servant leadership” with staffers letting members decide what to do. Only when the tax returns for Avaaz are examined, does a clearer picture emerge of who is really in charge.

Avaaz’s tax returns mention only one paid employee, its president, Ricken Patel, who pulls down a six figure salary—not bad for a ‘servant’. Patel was also a co-founder of Res Publica, the organization that co-founded Avaaz.

What’s the difference between Res Publica and Avaaz? Avaaz looks like an international activist group, which is convenient when you want to appear to be a global movement, instead of a disguised branch of the same old American left-wing organizations.

Res Publica gets the majority of its funding from the Open Society Institute, which makes Avaaz another disguised George Soros project, just like J Street. The Economic Times hails Ricken Patel as “The Man Who Gives You Your Voice”, but it’s not “your” voice, it’s Soros’ voice.

And if the anti-Israel agitrop of Harriet Sherwood were not enough, there’s a Guardian editorial to top things off reveling in Israel’s regional isolation.

If post-revolutionary Egypt and an economically resurgent Turkey make common cause against their former common ally – and there is every indication that they will – Israel‘s isolation in the region will be profound.

In other words, just another day at the “world’s leading liberal voice”.